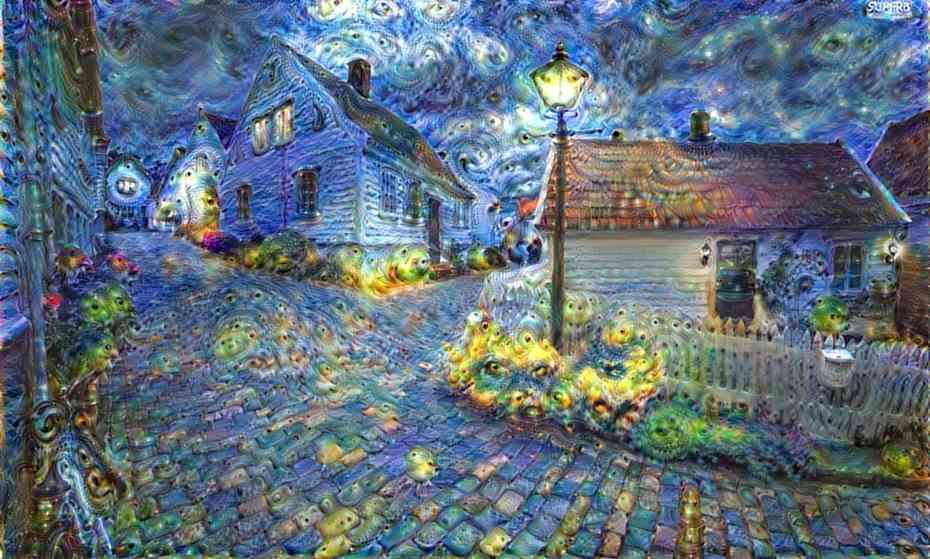 This article titled “Can Google’s Deep Dream become an art machine?” was written by Alex Rayner, for theguardian.com on Monday 28th March 2016 21.51 UTC

Over the last weekend in February one of Google’s computer science departments, Research at Google, co-hosted Deep Dream: the art of neural networks, with the Gray Area Foundation, a San Francisco not-for-profit organisation that fosters collaborations between the arts and technology. The idea behind the show is that surely a technology company that has pushed boundaries in tech can offer fine artists an app or two? But can it?

The show, held in a refurbished cinema in the city’s Mission district, displayed a series of manipulated, photographic works created using one of the tech firm’s artificial intelligence programs.

In an opening address and an accompanying online essay, Blaise Ag?era y Arcas, a Google machine-intelligence developer, likened the artistic use of such programs to photography, or the employment of optical instruments by Renaissance artists – tools which may have had their detractors, yet are now an accepted part of art history.

“Faced with a new technical development in art, it’s easier for us to quietly move the goalposts after a suitable period of outrage,” Arcas argued, “re-inscribing what it means for something to be called fine art, what counts as skill or creativity, what is natural and what is artifice, and what it means for us to be privileged as uniquely human.”

To reposition those posts would be mistake, in Arcas’ view: “We believe machine intelligence is an innovation that will profoundly affect art.”

One of the intelligent applications Arcas and co were touting was an image manipulation program also called Deep Dream. Developed at Google’s Zurich office in 2014 and released to the wider world last summer, Deep Dream uses artificial neural networks, a style of computing inspired by the brain and nervous systems, to learn to recognise shapes in pictures.

The program arose out of a project looking into visual classification tasks. Engineers wanted to see what might happen if, rather than making software to pick out, say, faces or number plates in a photo, they created a program which accentuated and expressed things which weren’t really there.

“If a cloud looks a little bit like a bird,” they explained, “the network will make it look more like a bird. This in turn will make the network recognise the bird even more strongly on the next pass and so forth, until a highly detailed bird appears, seemingly out of nowhere.”

The resultant pictures, packed with animal’s faces, intricate towers and swirling, colourful motifs, were exciting and unusual. Tech-literate artists took note, and once the code was released, many produced their own Deep Dream images, a few of which went on display at the exhibition.

Unfortunately, or perhaps fortunately, for the millions of artists still wedded to their easels and brushes, plenty of the works were not very good. A few pieces, such as the HR Giger-style rendering of a Google Maps image of GCHQ by the Turkish-born artist Memo Akten, are impressive and engaging. Most, however, look like dorm-room mandalas, or the kind of digital psychedelia you might expect to find on the cover of a Terrence McKenna book.

Yet, to focus just on the finished image, is, in the view of some Deep Dream artists, to miss the point. “Deep Dream was never about the aesthetics for me,” says Akten, a fine artist and PhD candidate at Goldsmiths University in London. Instead he was impressed by the way the machine learning manages to mimic and interact with human visual perception.

“It might look like Deep Dream is generating say, sparrow’s faces in clouds, but what it is actually doing is generating patterned noise, which our brains try to find meaning in.” Akten. “It creates just enough of a sparrow’s head in a cloud, so that our brains find the rest. Visually, our minds and Deep Dream are doing exactly the same thing. It’s such a perfect mirror. I love that conceptual aspect.”

Others in the art world concur. “What really distinguishes Deep Dream is the machine learning techniques used to generate the images, rather than the images themselves,” says Dylan Kerr, a New York-based writer and curator with a strong interest in computer generated art.

“It’s one thing to make a piece that is more or less an instrumental demonstration of what a novel technology can do, but I’m especially interested in artworks that use those technologies to tell stories or otherwise make meanings that are worth sustained attention and discussion.” Kerr explains. “Viewers will have to decide for themselves where on that spectrum these Deep Dream images fall – the auction shows that the market is already in the process of deciding how they’re valued.”

Indeed, the Deep Dream auction raised $97,600 for Gray Area Foundation, with Akten’s working achieving the highest sale price of $8,000 – respectable figures for a small gallery sale, yet microscopic in comparison to Google’s parent company, Alphabet which has a market capitalization of around $550bn.

So why is the tech firm bothering with Deep Dream? Do some within Google genuinely harbour a desire to further the development of fine art? Undoubtedly. Is Deep Dream a very minor event within the cultural life of the world’s largest company? Absolutely. Could Deep Dream service another goal? Maybe.

“It’s an amazing recruitment campaign, I think,” says Akten. “They want to engage with this community of artists hackers and developers, who don’t necessarily work at big companies, but have a lot of interesting ideas, and are producing interesting work. They can be at the centre of all this, and maybe recruit when the time comes.”

Alphabet now has interests in everything from public transport to healthcare, space travel to gaming. Just what shape that recruitment may eventually take is an inchoate as one of Deep Dream’s sparrow heads, though the end results could well be much more impressive.

Andreas Gursky and Richie Hawtin: experiments in sound and vision

Forget smartwatches, smartcars will drive the next revolution