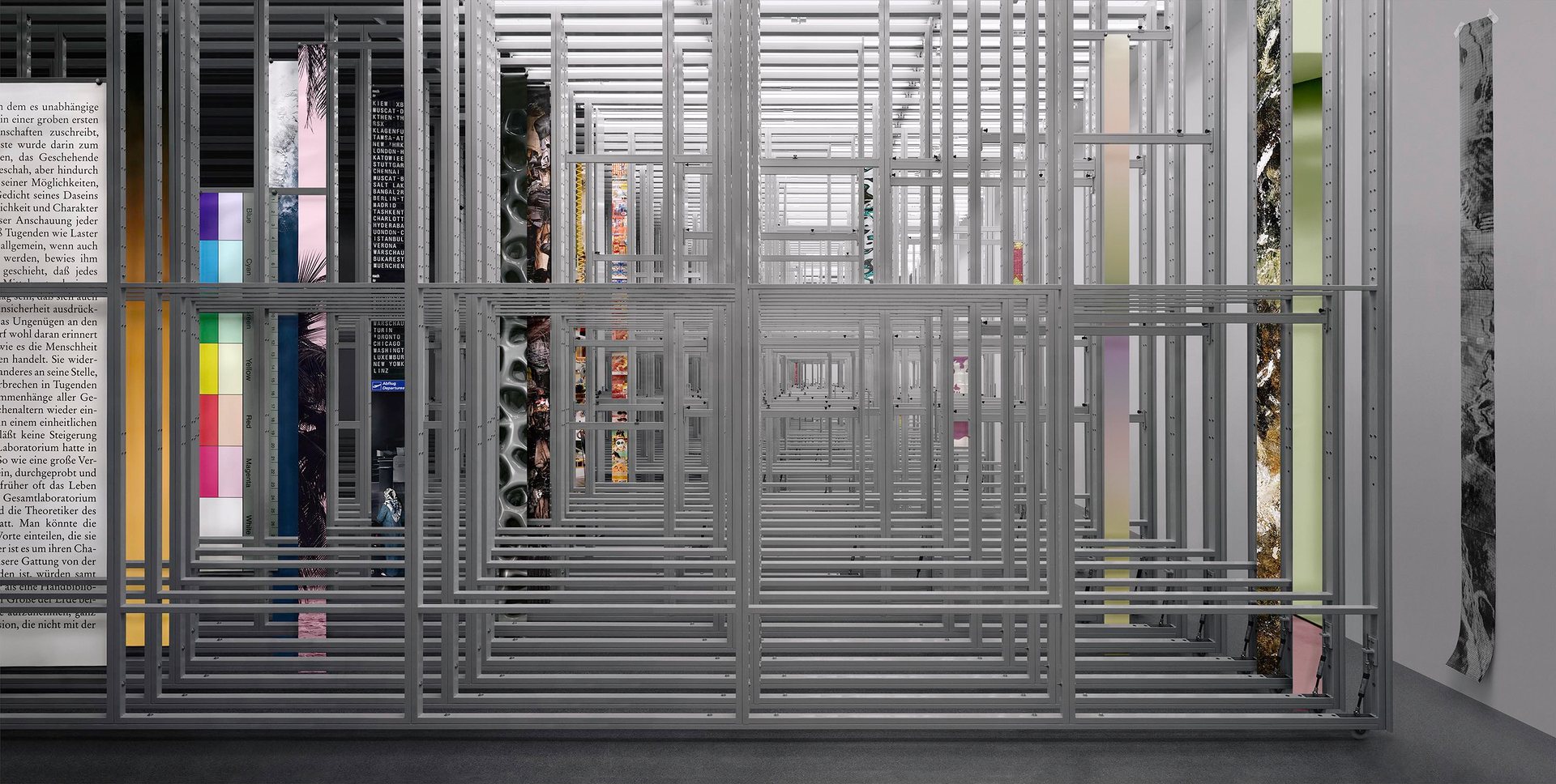 This article titled “Andreas Gursky and Richie Hawtin: experiments in sound and vision” was written by Alex Rayner, for theguardian.com on Thursday 10th November 2016 17.06 UTC

One is abstract expressionism – and the other is techno. To take the first, the German photographer’s preceding show, Not Abstract, was staged at the K20 state art museum in Gursky’s hometown of Dusseldorf. There his large, masterfully produced photographs were hung alongside works from the permanent collection by such artists as Mark Rothko, Jackson Pollock and Barnett Newman.

While the show’s name and many of Gurksy’s photographs have crossed the Atlantic, this new exhibition does not feature any ab-ex paintings. However, it does have a work by another artist who also contributed to Gursky’s Dusseldorf show. The Canadian DJ and techno producer Richie Hawtin, also known as Plastikman, composed a dedicated electronic, sound installation for Not Abstract, and has adapted and updated the piece for Not Abstract II.

“Richie and I have been friends for a long time,” says Gursky. “we have friends in common, and I’m interested in his music. I heard him in Tokyo and Ibiza, and at the Time Warp [dance music festival] in Mannheim.”

The German DJ Sven Vath introduce the pair, explains Hawtin, and that over the past decade or so they have developed a mutual interest in one another’s work. “We ran into each other quite often on Ibiza during the summer season of music events that both Sven and I were producing,” explains the 46-year-old musician.

Music at those events was played for dancing. However, Hawtin’s near-beatless, murmuring, buzzing abstract composition for Gursky’s show is made more as a concentration aid.

“There are repeated elements,” says Gursky. “At points it sounds like someone is breathing. I didn’t want the sound to disturb the images. I hope that when you enter the gallery the sound isn’t too engaging, or too loud.”

To that end, the Gagosian has embedded its playback system into the gallery’s walls, ensuring no speaker cones distract visitors from the photos on show, and that the aural experience is spread evenly throughout the display space. Hawtin says these visual restrictions imposed certain frequency limitations, and that, to understand just how it might sound, they built a mock-up wall in Berlin.

Yet, in almost every other capacity, the DJ has been given quite a free reign. Hawtin says that Gursky initially expressed an interested in his 1996 album, Concept 1, which the 61-year-old photographer used to listen to at his studio in Dusseldorf. Rather than rehash pieces from that record, the pair decided to develop a new soundtrack. Hawtin visited Gursky’s studio to study scale models of both the K20 and the Gagosian show, as well as examine the photos Gursky planned to exhibit.

Both artists recognise the practical similarities between their working practices, which combine a degree of technical excellence alongside an appreciation for repetition and the beauty which one can find in the artificial, rather than the natural world.

“I think there is an attitude when you spend your life listening to this music,” says Gursky who, as he points out, comes from the same city as electronic music pioneers Kraftwerk. “It inspires you indirectly.”

Hawtin flew into New York to oversee some final touches, and Gursky says that, following the Dusseldorf show, the pair hope to extend their working practice this Manhattan show.

“I told Rich to go a bit further,” he says. “The sound will be a bit more engaging.”

While this is the first time Gursky has worked with sound, Hawtin has something of an aural fine-art pedigree. In 2013, the Belgian fashion designer Raf Simons invited the DJ to stage a show at the Guggenheim in New York, and in 2011 the British sculptor Anish Kapoor asked Hawtin to perform some of his music beside Kapoor’s monumental sculpture, Leviathan, at the Grand Palais in Paris.

Hawtin says the Kapoor gig came about partly because his own 1998 album, Consumed, was recorded in response to Kapoor’s sculptures, and that his Concept 1 work was also developed as an attempt to create “auditory and visual experiences could create a new type of immersive experience”.

“It feels like there’s been a big push over the past 10 years into bridging the gap between sound installations and the world of electronic music,” says Hawtin, highlighting festivals such as Montreal’s Mutek or Barcelona’s Sonar, which have more in common with the art world than the rave circuit, as well as recording artists such as Germany’s Carsten Nicolai, who rose out the European techno scene, but is now more commonly heard in a gallery setting.

“I feel that audiences are more aware and interested in mixed-media type of exhibitions,” says Hawtin. “Since they are often more dynamic and fit in well with our technologically fuelled iPhone swiping society.”

Those iPhone swipers might be equally taken with lesser-known artists such as US painter Jennie C Jones, who pairs her works with sound installations, and Turkish acoustic artist Cevdet Erek, who will represent his country at the 2017 Venice Biennale. Gursky even came across a little sound art during his visit to New York to install his show.

“On Sunday I went to MoMA and saw the show by Kai Althoff, a German artist from Cologne,” he says. “It was an amazing exhibition and he also used sound pieces. It worked very well I would say.”

So will Gagosian’s collectors and art institutions get a copy of Hawtin’s soundtrack if they buy one of Gursky’s canvases? That has yet to be decided, says the photographer, yet he’s certainly open to the idea.