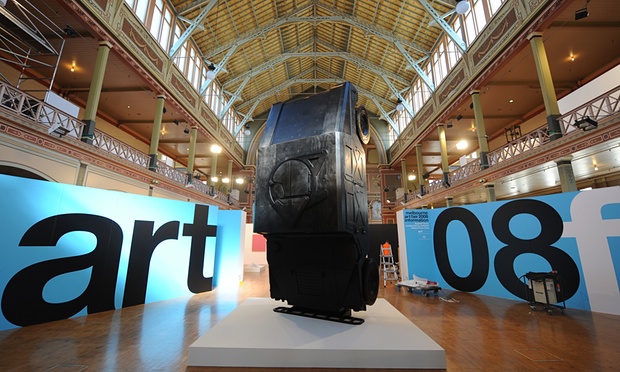 There have been 14 Melbourne art fairs in 30 years. Photograph: Julian Smith/AAP

One of Australasia’s most celebrated contemporary art events, the Melbourne art fair, has been cancelled citing a failure to attract international collectors, little national interest, and the withdrawal of three major galleries from exhibiting.

Chairperson of the Melbourne Art Foundation, Anna Pappas, made the announcement on Friday, saying the board, whose decision to cancel was unanimous, had no intention of putting on an “affordable, mediocre” fair.

The fair was due to be held in August in Melbourne’s Royal Exhibition building, and would have been the 15th in the foundation’s almost 30-year history. According to the foundation’s website, the fair showcases works from the region’s best galleries.

“I don’t blame them at all, they had every right to withdraw, and these galleries remain very dear to me,” Pappas said.

Pappas told Guardian Australia that the decision to axe the fair this year was made by the board on Tuesday after three “cutting edge” galleries withdrew from exhibiting in the fair, and one day before she was set to announce the public program of art events to take place during the week of the fair.

The galleries – Roslyn Oxley, Tolarno Galleries, and Anna Schwartz, withdrew just before payment to the foundation for exhibiting was due, Pappas said.

“There are more than 150 art fairs around the world now, and galleries have to make choices about where they exhibit and what they put their money into. And a lot of our galleries are choosing to go overseas to exhibit in the big, international art fairs.”

Pappas said the fair could have gone ahead. More than 90 galleries had applied to exhibit, and the spaces left by those who withdrew could have been filled.

“But we realised the fair would not be cutting-edge without these major galleries, and we have no interest in becoming an affordable, mediocre art fair,” she said.

Pappas said she would meet with the board over the coming days to decide whether the program of events to coincide with the fair would still go ahead, but she said she was hopeful that it would.

As for the future of the fair, Pappas said the foundation had every intention to bring it back again.

“It’s not the size of the fair that matters to the public, it’s the quality, and we need to take some time and reflect on how we can adopt a new model to make sure any fair in future maintains our reputation,” she said.

“It will be a new model, a different model, that will relfect changes in technology and the internet. We are excited about the future, and I believe when one door shuts another opens. I have such passion for this industry, and you can’t put out that flame. This is not the end of the world, and it is up to us to reflect on how we can attract the best galleries and stay cutting-edge.”

Guardian Australia contacted Anna Schwartz, but was told by a gallery staff member that Schwartz would not comment. Tolarno Galleries was also contacted, but also declined to comment. Roslyn Oxley was in a meeting and not immediately available for comment.