Champagne Life celebrates the work of a constellation of female artists, and provides a rare and apposite moment to reflect on what it means to be a female artist working today.

Drawing its title from one of the works on display, Champagne Life suggests high living, prestige and affluence, qualities that have led to champagne’s appropriation into Hip-Hop culture as an indicator of success when artists transition from economically depressed ghetto to uptown highlife.
Applied here to an exhibition bringing together the work of 14 emerging women artists, the irony of the title is palpable and throws into contrast the reality of many long, cold, lonely hours working in the studio with the perceived glamour of the art world. 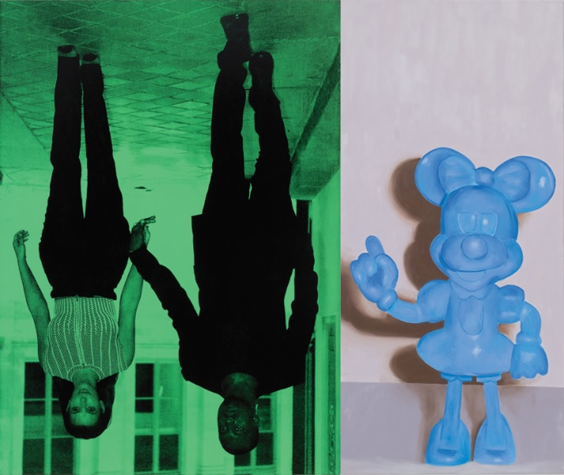 As an exhibition, Champagne Life does not offer an overarching vista of ‘female’ artistic practice; nor does it presume to state that there is such a thing. Instead this exhibition will play an important role in approaching issues of the glass ceiling that applies to the art world as much as to the world at large.

Champagne Life marks the Saatchi Gallery’s 30th anniversary and pays tribute to its commitment to supporting the work of women artists early on in their careers and providing them with a platform to showcase their work. Many of these artists have gone on to become central figures in contemporary art, including Cecily Brown, Tracey Emin, Paula Rego, Jenny Saville, Cindy Sherman, Rebecca Warren and Rachel Whiteread amongst many others.

Champagne Life showcases new and arresting work by an international group of emerging women artists and celebrates their contribution to the ongoing development of art today. The exhibition is presented in partnership with Champagne Pommery.

Mequitta Ahuja (USA)
Deep, saturated colours provide the ground for a cohort of fantastical figures in Mequitta Ahuja’s canvases. Ahuja weaves ancient mythologies into a pictorial style that is both trans-cultural and autobiographical – the figures are often self-portraits. Her rich visual language conveys the conviction that identity is ours to fabricate. Ahuja has exhibited at the National Portrait Gallery, Washington and at the Studio Museum in Harlem. In 2013, Ahuja was awarded the Maryland Individual Artist Award.

Alice Anderson (UK)
Alice Anderson is a British artist who studied at École Nationale Supérieure des Beaux Arts de Paris and has previously exhibited at Whitechapel Art Gallery, the 55th Venice Biennale, and the Wellcome Collection. To create her work 181 kilometres, commissioned by the Saatchi Gallery, Anderson used 181 kilometres of copper thread and the finished piece bears testament to her intensely physical creative process. She addresses the loss of the tangible, mummifying items in copper threads to create ‘recorded objects’, while achieving a meditative state in their creation through repetition.

Maria Angeletti (France)
A powerful statement about our contemporary image culture, Marie Angeletti’s work looks at the irreversible effect on artistic practice brought about by the availability of images on the internet. Angeletti’s work spins an associative web between apparently disparate images that might appear together in a Google search. The images are juxtaposed, spliced together, scanned, rescanned, photographed and re-photographed, distancing the image further from the subject it supposedly represents. Angeletti has an MA in photography from the Royal College of Art and has previously exhibited at Kunsthalle, Vienna and at Castillo/Corrales, Paris.

Jelena Bulajic (Serbia)
Shortlisted for the BP Portrait Award 2014, human faces are the subject of Bulajic’s minutely accurate paintings. She fills canvases with the faces of people she encounters in daily life whose character, look, or aura catch her interest. Bulajic cannot pinpoint the criteria for her selection but considers the possibility of the map contained within a face, and the layers of skin. This is the appeal of her work, the flesh as thinly containing a soul within.

Julia Dault (Canada)
Julia Dault studied her MFA in Fine Art at the Parsons New School for Design in New York and has since exhibited at the Museum of Modern Art, Warsaw and White Cube, Bermondsey. Dault transforms mundane, industrial materials into swathes of colour, from flat plane to cylindrical form, cutting volumes out of space in an almost architectural gesture. Each of her sculptures is assembled individually and bent to the artist’s will – signs of the struggle between artist and material are evident in the marks and scratches on the surface of the works.

Mia Feuer (Canada)
Mia Feuer’s work has taken her from the West Bank to the Suez Canal, the tar sands of Fort McMurray, the Arctic Circle, and the Louisiana bayous. In each instance she has brought her political and environmental approach to bear on the local situation. Her piece for Champagne Life, Jerusalem Donkey is the result of a series of workshops with children in Palestine where the creatures are vital to navigate military roadblocks. Feuer received the Joseph S. Stauffer Prize in Outstanding Promise of a Canadian Artist, Ottawa in 2012 and was the winner of The Trawick Prize in the same year. In 2016 she will take up the Gulkistan Artist Residency in Laugarvatn, Iceland.

Sigrid Holmwood (Australia)
Psychedelic neon tones clash with historical re-enactments of the lost Swedish traditional lifestyle of the 19th century in Sigrid Holmwood’s painting. She takes part in historical re-enactments, often wearing costume of the period when painting in public and using historic materials to emphasise her revisitation. Holmwood studied her MA in Painting at the Royal College of Art and has exhibited at ArtBasel and Transition, London among others.

Virgile Ittah (Paris)
Virgile Ittah’s work is a study in the frailty and transience of human flesh, where human musculature and flesh is rendered in painstaking detail. Each figure represents a different autobiographical narrative or area of research, the history of female hysteria among these. In Echoué au Seuil de la Raison, she plays with the confrontation of the duality between the organic material of wax, and the cold rigidity of the metal antique beds. This year Ittah’s work has been exhibited at la Galerie Particulière, Belgium, Nicodim Gallery, Bucharest and at the Dallas Art Fair.

Suzanne McClelland (USA)
Suzanne McClelland’s canvases use text, colour and form to convey data sets pertaining to both body builders and domestic terrorists in the US. There is an inherent frustration in her representation of these individuals and our ability to read them through the medium of her paintings. In the case of the terrorists, their very stories are evasive and inconclusive. McClelland has exhibited at The Whitney Museum of American Art and The New Museum of Contemporary Art, NY.

Seung Ah Paik (Korea)
Seung Ah Paik offers a uniquely truthful depiction of her relationship to her own flesh. Drawing elements of her style from a Korean portrait tradition where the identity of the sitter is revealed through showing the minute details of the face. She sees “every wrinkle, scar, callus, dead skin, and lump of cellulite” as a reflection of one’s history and personality, a refreshing view in a time where flawlessness is celebrated as innately beautiful. Currently studying her MFA at Goldsmiths College, her work has been exhibited internationally. In 2012, Seung Ah Piak won the Signature Art Prize for painting, and was also shortlisted for the Chadwell Award.

Stephanie Quayle (UK)
Born and brought up on the Isle of Man, Quayle’s sculptures link man to nature through the organic material of clay itself as well as animal to human: “I’m interested in how much we align or distance ourselves from them – how they reflect, question and return our gaze. How they see into our souls and connect us to the natural world and force of nature inherent within.” Rendered at life scale, the presence of Two Cows in the gallery space is muscular and impressive, reanimating a sense of shared connection between living matter. Quayle studied at The Royal College of Art and as well as exhibiting internationally, won two international ice carving competitions in Canada in 2013.

Soheila Sokhanvari (Iran)
Sokhanvari describes herself as a “cultural collage between Eastern and Western philosophy”, her work moving between political commentary and the magical. Visual metaphors abound in her works that deal implicitly with the Iranian state. Moje Sabz speaks of the ‘Green Movement’ uprising of 2009, in which violent protesters’ demonstrations led to the annulment of a fraudulent election result. This year her work was selected to be exhibited as part of the Jerwood Drawing Prize Exhibition and in 2012 was one of the UK graduates shortlisted for the Catlin Art prize.

Julia Wachtel (USA)
Julia Wachtel has been working in the same vein since the 1980s as part of the Pictures Generation, who were originally influenced by Andy Warhol and more recently by the internet’s quick exchange of images and the blossoming of celebrity culture. The ink dot has been transformed to pixel, Marilyn Monroe to Kim Kardashian. Her screen prints are almost algorithmic in their composition, producing samples of contemporary popular culture that are simultaneously instinctive and premeditated. Watchel studied at Whitney Museum of American Art and has exhibited at the Cleveland Museum of Art, the ICA, London and the Liverpool Biennial in 1999.