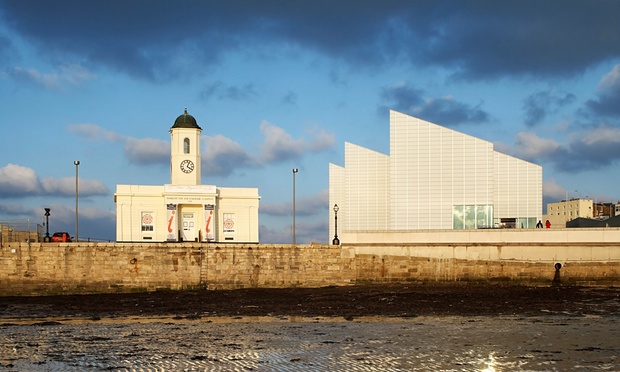 Opening of Turner Contemporary, right, in 2011 was greeted with cynicism, but gallery director says it has been at heart of Margate’s regeneration. Photograph: Alamy

The steamboat trip from London to Margate regularly made by JMW Turner is to be reconstructed by the Turner Contemporary to mark its fifth anniversary.

The gallery in Kent, which opened to much local cynicism in 2011, will bring to life the journey that the Romantic painter regularly undertook when he visited Margate.

He would have disembarked the boat at the Harbour Arm, where a 12ft-high shell lady sculpture now stands to welcome the boats, named Mrs Booth after Turner’s mistress, Sophia. Today the Turner Contemporary stands on the same site as Booth’s seafront guesthouse where Turner would stay on his visits to Margate.

The boat the gallery is using for the reconstruction is a paddle steamer, the Waverley, which will sail down the Thames and on to Margate in a journey that will take around three hours – an improvement on the nine hours it would have taken in Turner’s day.

Related: Punk with a paintbrush: how Turner sunk the Empire

The one-off boat trip, accommodating about 100 passengers, will take place in October 2016 to launch the gallery’s fifth anniversary show, Turner and Colour. It will bring together 70 of Turner’s watercolours from collections around the world, including 28 works from the Tate. The fullest survey of the painter’s watercolours of Margate to be displayed in the seaside town that inspired them, it will include his 1826 painting Margate, currently held by the Ashmolean, and Vermilion Towers, painted in 1834.

Turner’s love affair with Margate began at age 11 and he became a regular visitor from the 1820s onwards, drawn there by the light he loved to paint, and the chance to stay with his lover. The east Kent coast inspired some of his greatest seascapes and he once remarked to the art critic John Ruskin: “The skies over Thanet are the loveliest in all Europe.”

Ian Warrell, an art historian and leading Turner expert who will curate the show, said: “Colour is the essence of Turner’s work and his distinctive, sometimes eccentric use of colour was absolutely central to his achievement as an artist. In placing colour at the heart of the exhibition, the familiar outline of Turner’s life and art can be explored in a new way.”

Victoria Pomery, director of the Turner Contemporary, said that the breadth of the fifth anniversary show would be a testament to the success achieved by the gallery in just five years, with some of the most significant arts institutions in the world willing to lend Turner works to the exhibition.

She said: “Compare this to 2003 when the plans for the gallery were being made, when people used to say: ‘you’ll never get a real Turner at the gallery, you’ll only ever get a facsimile’.

“So to bring over 70 Turner works to Margate is incredible and for people to see them in the very place that they were inspired by, and where some of them were actually painted, is fantastic.”

Related: Turner painting to remain in Oxford after fundraising campaign

Pomery said the anniversary of the gallery was also an opportunity to take stock of the impact Turner Contemporary has had on the seaside town since it opened in 2011. Margate was until recently seen as emblematic of the decline of the British seaside resort but over the past few years has undergone a regeneration, which the gallery is seen to have been central to.

Nearly 2 million people have visited the David Chipperfield-designed space on the seafront, and it has injected £41m into the local economy. Just this summer, the number of visitors taking the train to Margate went up by 30%, also enticed by the reopening of Margate’s vintage amusement park, Dreamland, which had been shut for the 10 years.

“I have been absolutely staggered about the impact we have had,” said Pomery, who said when she first arrived in Margate in 2002 there was “absolutely nothing”.

“What we have achieved is real regeneration, real transformation and real change. To begin with, people were very sceptical whether a gallery would work, people would talk to me and say ‘we need a new hospital wing’, ‘we need an ice skating rink’, not an art gallery. But actually in a very short period of time we have achieved huge amounts of civic pride in the gallery and helped inject inward investment into the town.”

The so-called Margate renaissance has also seen 35 new businesses, including cafes, restaurants and boutique hotels, open in the town, and it has become a hub for artists escaping the high prices and limited space of London.

“There’s been real investment and we are now seeing lots of artists and creative individuals moving to Margate,” said Pomery. “First, because of the fantastic links to London, but also the space – both literally and in terms of head space – means it is a great place to make works.”