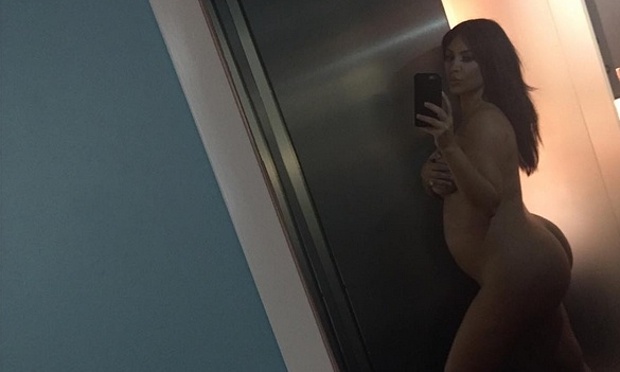 This article titled “Why Kim Kardashian’s pregnancy selfie would turn Titian on” was written by Jonathan Jones, for theguardian.com on Wednesday 12th August 2015 12.10 UTC

Kim Kardashian reclaims the beauty of being pregnant in her latest impressive selfie. In soft light, she sports an even more curvaceous form than usual: even more contours to revel in.

It’s a hymn to the female body that would have been far more familiar in the Renaissance than today. Stomach bulges are so common in Renaissance nudes that historians argue over whether or not they represent pregnancy. Van Eyck’s Eve and Raphael’s La Fornarina can both be seen as pregnant – or not – and their stomachs are very much part of their sensuality.

But then, body shapes were celebrated much more plurally in the past than they are today. Ours is the most misogynist age in history, if art is anything to go by. Only in our time does every image of beauty tell women to get thin, thin, thin. All those “fat” women in paintings by Rubens were not even commented on in that way in his time – it is a modern perception. Rich, ample, curvy, rampant flesh is, for Rubens, simply and obviously sexy. Titian’s Venus of Urbino, the most beautiful woman in art, would be seen as plump today – if not in early pregnancy.

Titian loved women with big arms and thighs and plenty of golden flesh. He also painted pregnancy as a beautiful metamorphosis in his Diana and Callisto. Kardashian’s gorgeous selfie would undoubtedly impress him. She is raising questions about the nude today. Why can’t we glory in beauty as openly as artists did in the past? A nasty disciplinary mentality closes off the true power of the nude.

It even poisons “serious” art. Lucian Freud’s paintings of ample womanhood are, for instance, anything but celebratory. His grim brushstrokes verge on monstering largeness as something tragicomic. He almost seems to be insisting, in the scarred sadness with which he painted Benefits Supervisor Sleeping, that he does not find this sort of thing at all sexy.

Rubens and Titian would have relished and glorified the model Sue Tilley’s flesh. They’d have painted her with lust, not Freud’s neurotic disdain. We need an art of the nude that is celebratory and loving – and Kardashian really does love her body. She is bringing back the happy, liberating openness of Renaissance and baroque art. She gets her share of criticism, but this latest selfie is brave, original – and artistic.