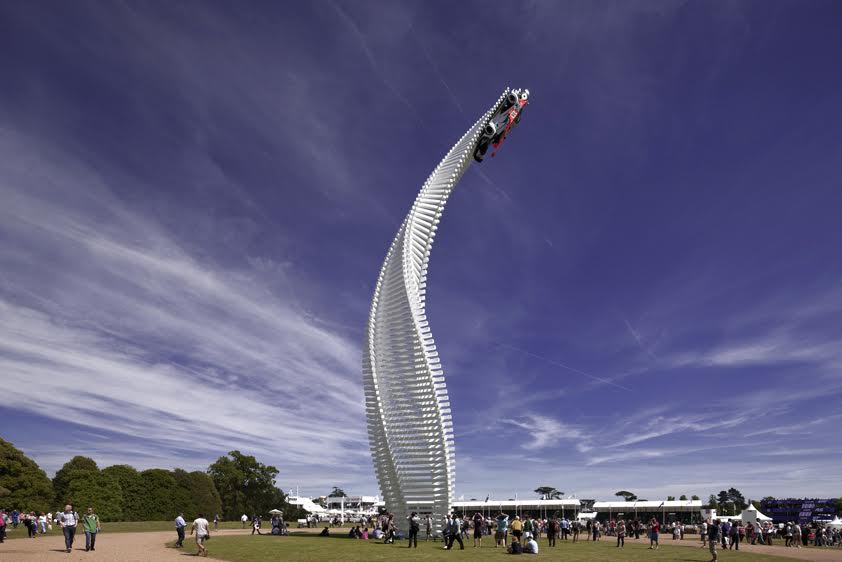 Locked in close contention, the rotary-engined 787B Le Mans winner and the LM55 Vision Gran Turismo concept sprint 40 metres skywards trailing a spectacular slipstream of muscular twisted steel. Stacked in the manner of pristine matchsticks, 720 steel beams of varying length and juxtaposition seamlessly swell, slim and fold the structure from right to left, cantilevering the cars high over the spectators below. 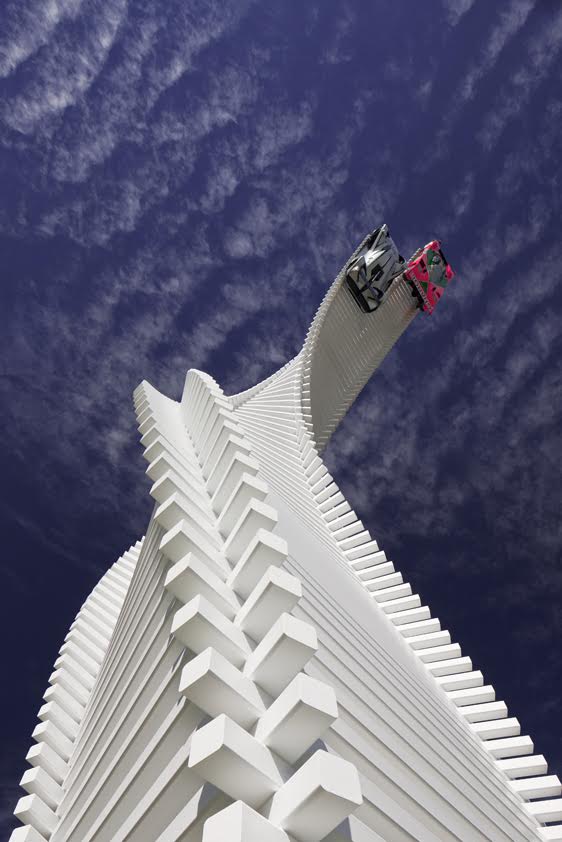 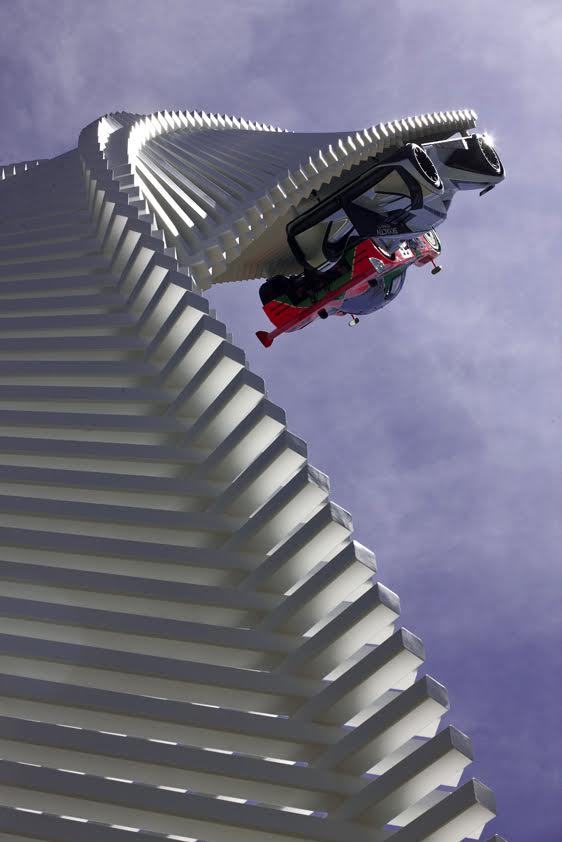 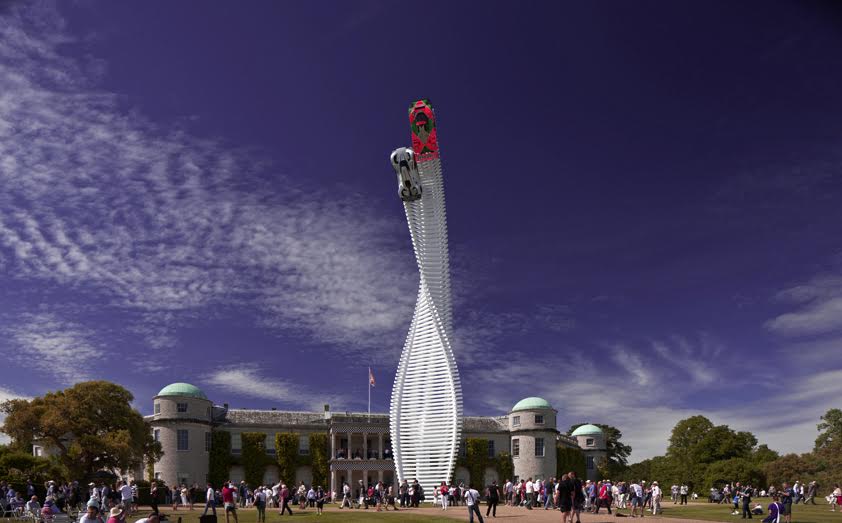 Featuring 120 tonnes of steel sections which, laid end-to-end, would stretch the entire 1235 metre length of the Goodwood Hill Climb, this beguiling structure is sculptor Gerry Judah’s most complex and sophisticated Centrepiece to date.

About The Artist
G
erry Judah’s maternal and paternal grandparents came from Baghdad to settle in the already established Baghdadi Jewish community in India and Burma. His mother was born in Calcutta and his father in Rangoon. Gerry Judah was born in 1951 in Calcutta and grew up in West Bengal before his family moved to London when he was ten years old.

As a boy, the dramatic landscapes of India and the ornate architecture of its temples, mosques and synagogues with their theatrical rituals had a profound effect on Judah’s developing psyche. These theatrical elements were to resurface in his own later work. Austere London, still in its post-war drab, was a shock to the young boy, and he chose to spend as much time as possible in his bedroom conjuring up with pencils and paper imaginary landscapes, architectural fantasies and futuristic cars, leading him to want to become an artist.

Judah left Whitefield Secondary Modern School, London in 1969 and worked in a number of jobs from kitchen porter (Blooms Restaurant, Golders Green, London) to architectural draughtsman (T.P Bennett and Son – London, Richard Seifert and Partners – London and Douglas Scott, the designer of the Routemaster bus) after which he went on to study Foundation Art and Design at Barnet College of Art (1970–1972) before obtaining a degree in Fine Art at Goldsmiths College, University of London (1972–1975) and studying sculpture as a postgraduate at the Slade School of Fine Art, University College London (1975–1977).

After college, Judah set up his studio in Shaftesbury Avenue, the theatre centre in the West End of London. There, he began to work on large sculptures. Needing still to earn his keep and finance his work, he took casual work round the corner in many theatres as a stage hand and scenic artist. This included work at the Royal Opera House, English National Opera, Royal Festival Ballet, London Contemporary Dance, Sadlers Wells Royal Ballet, Royal Shakespeare Company and the Royal National Theatre.

Taken with the public nature of this work Judah decided to find settings for his own art in more public arenas than the rarefied spaces of conventional galleries. He began to build a reputation for innovative design, working in film, television, theatre, museums and public spaces. He created settings for the BBC, British Museum, Museum of Mankind, Natural History Museum, Imperial War Museum, Museum of Tolerance, Paul McCartney, Michael Jackson, Robert Plant and Jimmy Page, The Who and many other performers. He has also created sculptures for Ferrari, Porsche, Audi, Jaguar, Mercedes-Benz, Renault, Ford, Rolls-Royce, Honda, Toyota, Land Rover, Alfa Romeo and Lotus at the annual Goodwood Festival of Speed and bridges in London and Cambridge.

Amongst a number of commissions from public museums and institutions, Judah was asked by the Imperial War Museum in London to create a large model of the selection ramp in Auschwitz-Birkenau for the Holocaust Exhibition opened by Queen Elizabeth II. Extensive research and numerous visits to Auschwitz led him to produce work that encouraged his art into yet a new direction. Returning to his fine art beginnings he began to make art born of his reflections on historical and contemporary events creating a body of large three-dimensional paintings exploring the devastations of war and the ravages man has made upon the environment caused by recent conflicts in Eastern Europe and the Middle East with solo exhibitions: FRONTIERS at the Timber Yard – London in 2005, ANGELS at the Royal Institute of British Architects – London in 2006 and the British High Commission – Delhi in 2007, MOTHERLANDS at the Louise T Blouin Foundation – London in 2007, COUNTRY at Wolverhampton Art Gallery – Wolverhampton 2009, BABYLON at Flowers East Gallery – London in 2009, COUNTRY at the Fitzroy Gallery – New York in 2010, THE CRUSADER at the Imperial War Museum North – Manchester in 2011, BENGAL as part of TIPPING POINT at the Wolverhampton Art Gallery – Wolverhampton in 2013 and two sculptures in St Paul’s Cathedral – London commemorating 100 years since the beginning of the First World War. 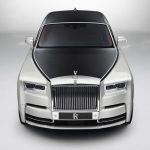 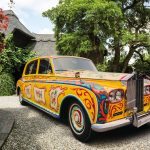