Muse, the Rolls-Royce Art Programme, today revealed the four moving-image artists, shortlisted for its inaugural flagship initiative, the Dream Commission. The Dream Commission is a biennial prize, awarded to inspire greatness and foster creativity in the media of moving-image. Artists Sondra Perry (USA), Beatriz Santiago Muñoz (Puerto Rico), Martine Syms (USA) and Zhou Tao (China) were selected by an international Jury of leading art world individuals, having been nominated by a panel of industry figureheads, over the course of 2020.

Each artist has created a short-form moving-image artwork, exploring the notion of ‘Dreams’. These works will act as a proof of concept for consideration by the Jury, leading to one artist being awarded the commission of creating a new moving image artwork in 2021.

New Jersey-based interdisciplinary artist Sondra Perry works across the media of AI, animation, performance, and video, amongst others. At the forefront of Perry’s work lies an exploration of the themes of race, identity and technology. Perry’s short-form artwork, Lineage for a Phantom Zone, is as a meditation on lineage, longing, and memory using footage of her own and from online archives.

The artist commented; “the piece begins with me playing a theremin, using the touchless liminal instrument to conjure a dream space with multi-dimensional sound. Growing up, my grandmother had a picture of herself on the land she was raised on in North Carolina on her dresser. I think about that picture often and I wanted to reflect on her history, that land, and my experience of it through images. I collapse time, space, and two generations of family to visualize a life dream that was mutated through imagination, images, and video and passed down through my DNA”.

Beatriz Santiago Muñoz is an artist and filmmaker based in Puerto Rico. Her approach to filmmaking resembles the careful approach of an ethnographer; her films arising from long periods of research, observation and documentation. For Santiago Munoz’s short-form artwork The Source, she weaves together heterogenous snapshots of people, places and experiences, evoking a sensorial response in the viewer. Taking place against the backdrop of Puerto Rico, the artist brings the rich history and culture of the country to light. She commented, “It begins with an experience. My son is standing at the source of the Río Caguitas. Something seems to stop. Is it the ancient rock, the loud cold water pushing, the slowness above us, the smell? An interval. Reading his translation of Proust to Haitian Kreyòl, a project undertaken for its own sake and without readers in mind, my colleague writer and translator Guy Regis Junior had said the task had been both full of pleasure and sacrificial. From there, there is an opening-up in the interval, in that time/space between one language, history and sensorial world, and another”.

LA-based artist Martine Syms has earned wide recognition for a practice that combines conceptual grit, humour and social commentary. For her short-form moving image artwork, Kita’s World, Martine introduces viewers into her personal mythology; equal parts biological, psychological and sociological. The artist commented, “My world is a strange combination of core material, broken samples, seductive loops, and heavy theory. Kita’s World considers the problem of the psychosomatic slip in the digital era. Symptomatic of the contemporary condition, I was inspired by an anecdote by a prominent theorist in which intimate technology appears to read our minds. Everything has a subtext, ulterior motives—but tech flattens everything out. It can speak our unconscious; we unravel equally in realms both real and digital. There is a dissolution of difference but no real plurality. I’m using Kita, an homage to an avatar from my childhood, to think through this tension”.

Guangzhou-based artist Zhou Tao works primarily in video, drawing and photography. His moving-image artworks invite us to experience the multiple trajectories of reality. For his short-form moving image artwork Three Hundred Miles Southwest, Tao moves the gaze of his lens from densely populated areas to a remote and almost mythological setting. The artist commented, “Three hundred miles from the dangerous peak to the southeast, those forgotten areas not covered by the high-speed network are at the end of the geography. Between a wolf seeker with mountains as a companion and the 37th ‘remote style’ ecological model; between the giant reliefs in the narrow valley and the legendary gate into the four-dimensional; the engineering bases connected from one terminal to another scattered among the mountains, presenting a future fable that has long passed away of this mythological place”.

After five years of supporting international artists in creating new works, the Rolls-Royce Art Programme announced a new vision in 2019 to become Muse¸ a platform with two biennial initiatives, the Dream Commission and the Spirit of Ecstasy Challenge. Rolls-Royce’s ambition for the Dream Commission, founded in partnership with the Serpentine Galleries, London and the Fondation Beyeler, Basel,is to establish the marque as a relevant platform for advancing the medium of moving image today. Celebrating the latest innovations in the field of moving image art, Dream Commission works can be from any medium within that category including experimental film, video, animation, immersive and participatory installations, and content presented in non-screen formats, such as augmented and virtual reality.

As the two-year process concludes, the cycle will begin again, yielding a group of landmark works of moving-image art.

Sondra Perry (b.1986, USA) makes videos, performances, and installations that foreground digital tools as a way to critically reflect on new technologies of representation and remobilize their potential.  Her works examine how images are produced in order to reveal the way photographic representations are captured and re-circulated. Sondra Perry was born in Perth Amboy, New Jersey, raised in New Jersey and North Texas, and has lived and worked in Newark, New Jersey since 2019. She received her MFA from Columbia University, New York, and her BFA from Alfred University, Alfred, New York, in 2015 and 2012, respectively.

Martine Syms (b. 1988, Los Angeles (CA)) obtained a MFA from Bard College, Annandale-on-Hudson (NY) (2017) and a BFA from The School of the Art Institute of Chicago (IL) (2007). Syms has earned wide recognition for a practice that combines conceptual grit, humour and social commentary. Using a combination of video, installation and performance, often interwoven with explorations into technique and narrative, Syms examines representations of blackness and its relationship to vernacular, feminist thought, and radical traditions. Syms’s research-based practice frequently references and incorporates theoretical models concerning performed or imposed identities, the power of the gesture, and embedded assumptions concerning gender and racial inequalities.

Zhou Tao (b.1976, China) finds visual and narrative materials for his arresting film works in the places and communities he encounters, and the narration of the film is often developed from the accumulation of the encountered moments. There is no single entry to the practice of Zhou Tao, through often subtle and humorous interactions with people, things, actions, locations and situations, Zhou’s videos invite us to experience the multiple trajectories of reality—what he once called the “folding scenario” or the “zone with folds.” For him, the use of moving image is not a deliberate choice of artistic language or medium, instead the operation of the camera is a way of being that blends itself with everyday life. Zhou studied at the Guangzhou Academy of Fine Arts and received a Bachelor of Fine Arts in oil painting in 2001 and a Master of Fine Arts in Mixed-Media Studies in 2006. Tao’s recent solo exhibitions include: Zhou Tao: Winter North Summer South, Times Art Center Berlin, Berlin, 2020; Zhou Tao: The Ridge in a Bronze Mirror, Times Museum, Guangzhou, 2019; Green Sun, an exhibition by Zhou Tao, Bangkok Art and Culture Centre, Bangkok, 2014.

About Muse – The Rolls-Royce Art Programme

Muse is the Rolls-Royce Art Programme, designed to foster and inspire creativity through collaboration with artists who share the marque’s passion for pushing technical and conceptual boundaries. Consisting of two ongoing biennial initiatives, Muse partners with some of the most respected and prestigious institutions in the world, such as Foundation Beyeler, Basel and Serpentine Galleries, London. Muse will provide selected artists with time and resource to produce art conceived, and to be experienced, without compromise.

Muse marks a new direction for the Rolls-Royce Art Programme, which has, since its inception in 2014, invited Rolls-Royce patrons into the world of contemporary art. To date, leading artists Refik Anadol, Tomas Saráceno, Asad Raza, Dan Holdsworth, Isaac Julien, Yang Fudong, Pipilotti Rist, and Ugo Rondione have collaborated with the Art Programme. 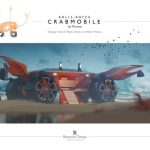 Rolls-Royce Motor Cars is a brand that encourages the pursuit of dreams, and now a new generation of aspiring designers are being encouraged to bring their automotive dreams to life through a special ‘Young Designer Competition’.