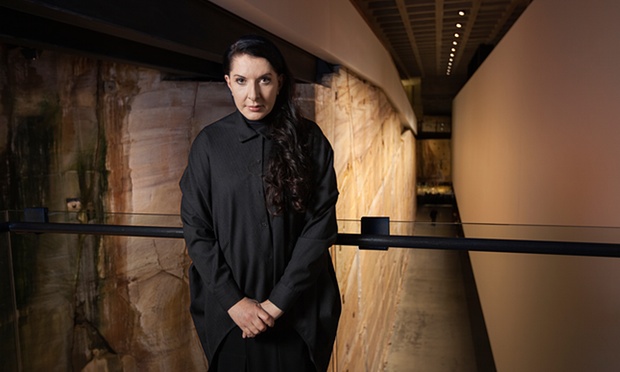 This article titled “Marina Abramovi? reveals plans for her funeral, ‘the artist’s last piece'” was written by Nancy Groves, for theguardian.com on Wednesday 1st July 2015 02.41 UTC

Marina Abramovic has already planned her own funeral, which will incorporate her final performance work, live music, a colourful dress code and plenty of black comedy.

In a keynote speech in Sydney during her 12-day residency for Kaldor Public Art Projects, Abramovic – in good health at 67 – read out her manifesto, concluding that “an artist should die consciously without fear” and that “the funeral is the artist’s last piece before leaving”.

Revealing her own funeral scenario (“You should think about everything”), she said an artist must give instructions “so everything is done the way he wants”.

“I want to have three Marinas,” she said when an audience member pushed her for details. “Of course, one is real and two fake because you can’t have three bodies. But I want these three Marinas buried in the three cities which I’ve lived [in] the longest, which is Belgrade, Amsterdam and New York.” Nobody would know where the real body was interred, she added.

Abramovic was motivated to plan her service after attending the funeral of her friend, the author Susan Sontag, at Père Lachaise cemetery, Paris, in 2004.

“It was the saddest funeral I’ve been to in my life and she is one of the greatest human beings I have ever met. She was full of life, curious and just an incredible writer,” said Abramovi?. “I went back to New York and went straight to the lawyer and said my funeral is going to be like this. And then I made an entire script.”

Related: Marina Abramovic: ‘The planet is dying. We have to be warriors’

Mourners would be made to dress in the artist’s trademark black “like a cockroach”, she joked, before revealing she would actually insist on bright colours, “even” pink.

“I want Antony [Hegarty] of Antony and the Johnsons, who is a great singer and friend of mine … to sing I Did It My Way. He never said yes but I think he will be so sad that I die he will probably do it.”

Hegarty and Abramovi? starred opposite each other in Robert Wilson’s show The Life and Death of Marina Abramovi?, at the 2011 Manchester international festival, and Abramovi? was in the audience of Hegarty’s recent show at Dark Mofo festival in Hobart after launching her exhibition, Private Archaeology, at Mona.

Her funeral plans echo a recent interview in Tasmania where she talked about the three parts of her personality: “The one Marina is very heroic. I just go for it. I don’t care how much pain inside. Then we have second Marina – very different, very spiritual, very emotional … And then there is third one who really like bullshit.”

In Sydney she spoke of the genesis of her art, the time she spent with Indigenous communities in the Western Australian desert, and her plans for the as-yet-unbuilt Marina Abramovi? institute in Hudson, New York – her “legacy” – where she will teach mindfulness exercises to the public.

The institute will include a “blood bank”, a collection of blood samples from 250 of the most inspirational artists, philosophers, scientists and people from indigenous cultures, which will once a year be re-energised by a Brazilian shaman. The project was as yet “unrealised”, Abramovi? said.

“Now I have this long career of 45 years, I never look back,” she told the Sydney audience. “I only look in the future because when I look back, I think I should be dead by now.”