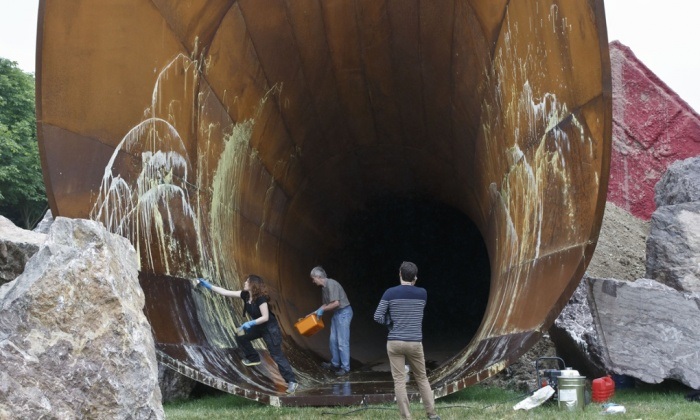 Anish Kapoor has got himself into a spot of bother with a sculpture at the Palace of Versailles. There have been protests, arguments, furrowed brows, vexed editorials, and even vandalism, but it has less to do with art than it has to do with society. Kapoor’s work is no better or worse than it’s ever been, and it is not suddenly more or less interesting, it’s just that it has exposed an ugly way of using art to vent political anger.

The furore began because Kapoor described his sculpture, Dirty Corner, as ‘the vagina of the queen’. This huge metal funnel, looking up towards the windows of the palace and innocently surrounded by rocks, does indeed sustain that description and the political implications that have been drawn from it has divided both French and international opinion on the matter. The comment has sparked outrage from those who feel it is a vulgar insult to French history, which only reveals a deep-seated unease about the former monarchy. The real problem is that it has made French society, or some sectors of it, confront its past in an uncomfortable way, revealing the manner in which they valorise the revolution and the Republic at the same time as hold Versailles as some kind of screed emblem. In disgust, the sculpture has had paint splattered all over it – that will show them, Kapoor and the interminable ghosts of French history.

There is no doubt that Kapoor intended to destabilise the holy order of Versailles, to bring chaos to its otherworldly tranquillity by engaging, in a contrary and confrontational manner, with its past. But there is some considerable doubt as to whether art is really the appropriate occasion for political activism. Art is foremost an aesthetic event, for pleasure and cultural enlightenment, and should only be politicised as a commentary made by the artist. In this sense, it is a one way street: art is a vehicle of political dialogue, but it is not an object of political action and cannot be because it is foremost aesthetic.

It seems as if Kapoor has unwittingly forced some people to ask uncomfortable questions to which they have reacted with an act of violence against a work of art. But to attack the artwork is to hit the wrong target, for what riles these people is not the work at all; it is, rather, the history with which they live that unsettles them, for it is only when we have made peace with history that we can begin to be critical of it. Thus this intolerance of art is a smokescreen for a much deeper existential intolerance. The artwork itself would have remained innocuous if Kapoor had not attempted to explain it, and by explaining it he opened a can of worms which has been happily munching away undisturbed at the corpses of history. The artwork becomes the target of this frustration because it is the thing that dredged it up, but not because it in and of itself says anything conceptually concrete about the history itself.

This incident illustrates how art is made a scapegoat when the true objects of thought are buried under noble but deceptive intellectual principles like freedom and democracy. The non-existent French monarchy ceases to be an issue in the Republic because it is overridden by other political principles, but an artwork that brings it all out into the open reveals a festering wound. The point is precisely that art is not responsible for your politics or your history, even if it is responsible for forcing you to consider their long-forgotten depths. As such, it should not be an object of political violence, which should be reserved for the political objects themselves.

It is not unusual for works of art to unsettle the gentle flow of society by confronting difficult issues, as we saw with Paul McCarthy’s sex toy tree in Paris. But one wonders if people should blame themselves and their societies for repressing the uncomfortable truths of life and for creating environments in which taboos, like history and sex, are allowed to fester. Open dialogue about political issues is surely far preferable to using artworks as scapegoats for the darkness of the human soul when all artworks do is remind us that those depths are there, for they certainly do not create or perpetuate them.

If one wants to attack artworks, one would do the world a more worthy service by attacking artworks because they are, in themselves, bad, vapid or damaging to art. If you have a political problem, brought to the surface by an artwork, go attack the politics whatever they may be, but if you have an aesthetic problem – say with the childish ugliness of an Oscar Murillo – go attack the art. You’ll still be committing acts of violence, which society frowns upon, but at least your actions, priorities and causal chains will be in order. Art, after all, is much more wicked for being art than it is for being a reminder of some trauma that history has buried.