Gagosian Gallery has just announced  announced an exhibition of paintings, sculptures and works on paper by Cy Twombly will inaugurate their new gallery at Grosvenor Hill in Mayfair London.

The exhibition will include as yet unseen large Bacchus paintings, which Twombly retained in his studio, as well as loans from other collections. It is organized in collaboration with the Cy Twombly Foundation. 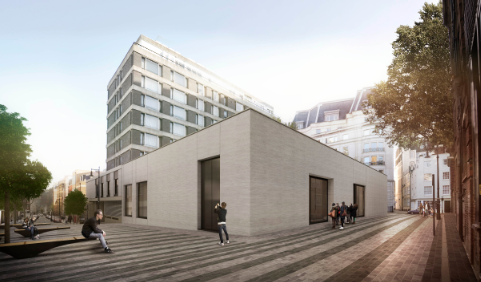 Twombly’s enduring importance to the art of the present is attested to by the many recent survey exhibitions in leading international museums. He has been a cornerstone of Gagosian Gallery since it opened in New York in the 1980s. Gallery exhibitions of his work presented over the last twenty-five years include “Bolsena Paintings” (1989–90) and “The Coronation of Sesostris” (2000–01), to “Lepanto” (2002), “Bacchus” (2005–06), and “The Rose” (2009).

Designed by award-winning architects Caruso St. John, who were also responsible for Gagosian Britannia Street and Gagosian galleries in Rome and Paris, the new gallery – the third in London — features large double-height daylit spaces, and is located in Grosvenor Hill, above Berkeley Square, between Davies Street and New Bond Street.

Larry Gagosian comments, “It was a tremendous honor that Cy Twombly inaugurated so many of our European galleries with exhibitions of new work. In keeping with this tradition, we are excited to be able to show several previously unseen works as the opening exhibition at the Grosvenor Hill gallery. We are proud to do this in collaboration with the Cy Twombly Foundation.”

Cy Twombly (1928–2011) was born in Lexington, Virginia. He studied at the School of the Museum of Fine Arts, Boston (1947–49); the Art Students League, New York (1950-51); and Black Mountain College, North Carolina (1951–52). In the mid-1950s, following travels in Europe and Africa, he emerged as a prominent figure among a group of artists working in New York that included Robert Rauschenberg and Jasper Johns. Major retrospectives were held at the Whitney Museum (1979); Kunsthaus Zürich (1987, traveled to Madrid, London, Düsseldorf, and Paris); and Museum of Modern Art, New York (1994, traveled to Houston, Los Angeles, and Berlin). In 1995, the Cy Twombly Gallery opened at The Menil Collection, Houston, exhibiting works by Twombly since 1954. The European retrospective “Cy Twombly: Cycles and Seasons” opened at Tate Modern, London in 2008 and traveled to Bilbao and Rome. “Cy Twombly: The Natural World, Selected Works 2000–2007,” Art Institute of Chicago (2009) and “Sensations of the Moment,” MUMOK, Vienna (2009) were important surveys. In 2010, his permanent site-specific painting Ceiling was unveiled in the Salle des Bronzes at the Musée du Louvre. At the same time he was made a Chevalier of the Légion d’honneur by the French government. Twombly died in Italy in 2011.