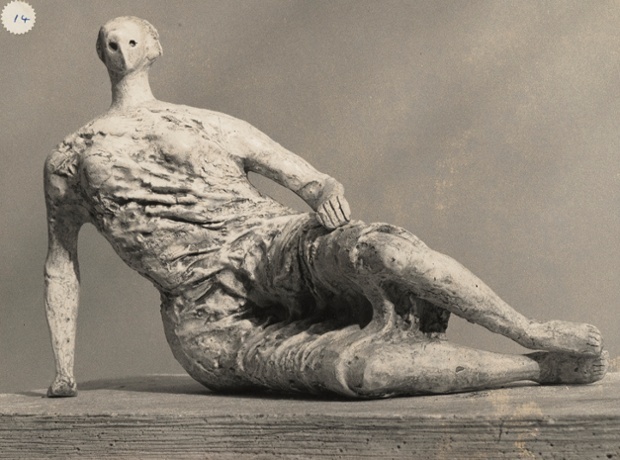 This article titled “Unseen Henry Moore sculpture designs to go on display in London” was written by Hannah Ellis-Petersen, for theguardian.com on Wednesday 13th May 2015 16.35 UTC

A collection of unseen photographs by Henry Moore are to go on display for the first time, revealing a series of works the Yorkshire sculptor designed but which were never realised.

All 20 of the images to be exhibited in London were taken between 1956 and 1957, revealing the various options that Moore crafted to sit outside the Unesco building in Paris.

While the monumental Reclining Figure that was eventually installed in 1958 has since become a part of the art landscape of Paris, Moore’s photographs reveal nine other miniature plaster models of sculptures that were potential options but later abandoned.

“It’s quite shocking these photos have taken so long to go on display,” said collector David Grob, who co-organised the exhibition. “They offer us a window into Moore’s process but also perfectly preserve how the artist viewed his own sculptures. Through these photos we can look through Moore’s own perspective.”

Moore was born in Yorkshire in 1898 and is known globally as one of the greatest 20th-century sculptors, with his figurative pieces, often characterised by their swelling masses and rounded voids, now displayed across the world. His Unesco sculpture, made from Roman travertine marble, was among the first prestigious international commissions he was given to create public artwork and was the biggest sculpture he ever made.

Each of the haunting black-and-white images depict one of the miniature figurative maquettes that Moore carefully crafted in plaster. As part of his process, he would make a detailed model of each work, take photographs from various angles, and then use the photographs to decide which work he wanted to enlarge.

As well as the reclining figure, the photos reveal that Moore experimented with several tableaux, including group sculptures of figures sitting on a bench and more tender scenes between parents and children. These photographs are the only remaining documentation of these scenes set up by Moore as he experimented with ideas for his Unesco sculpture.

“Unlike painters, sculptors can really use photography to work out how their pieces are going to look in situation,” said Grob. “With Henry, he photographed several of them from behind, from the sides. You see how he wanted the light to hit the figures, so when he was actually placing the figure in Paris he was able to look at the photographs to work out exactly how it was going to work in the landscape.”

Moore enlarged five of the photos and it was these which were sent to Paris and used by Unesco to select which work they wanted him to make for the commission. After appearing on sale in Paris for the first time two years ago, they were purchased by Grob. The other unseen Moore photos had sat for years within the collection of filmmaker Dudley Shaw Ashton, who made a 1959 documentary about Moore’s Reclining Figure in Paris. After these images recently came up for sale, they were bought by Grob with the intention of displaying all the images together for the first time.

Throughout his lengthy career Moore was a prolific photographer of his own sculptures but the images are very rarely exhibited.

Grob described the images as the “perfect medium to offer a new perspective on an artist whose work we have all become so used to looking at”.

Related: Antony Gormley: ‘I am beginning to learn how to make sculpture’

“They are absolutely powerful because they isolate the pieces,” he added. “In these images you see the sculptures totally undisturbed and without any rubbish or chaos of the world around them. You will never see these pieces looking this good ever again, they are kind of perfect.”

While only Reclining Figure was used by Unesco, Grob said that the various discarded designs cropped up, developed or adapted, in later sculptures and bronzes made by Moore. The photos, he added, had also made him question whether Unesco had made the best selection from the options presented to them.

“My particular favourite of the collection is the model of a small figure with a child standing looking at it,” said Grob. “Moore’s photographs all differ, but with this one you see he has taken it from behind – you see the mother’s back and you see the child looking up to the mother and it’s extraordinary, it’s beautiful, and I’m surprised Unesco didn’t chose it. It’s the one I would have chosen if I was commissioning it.”