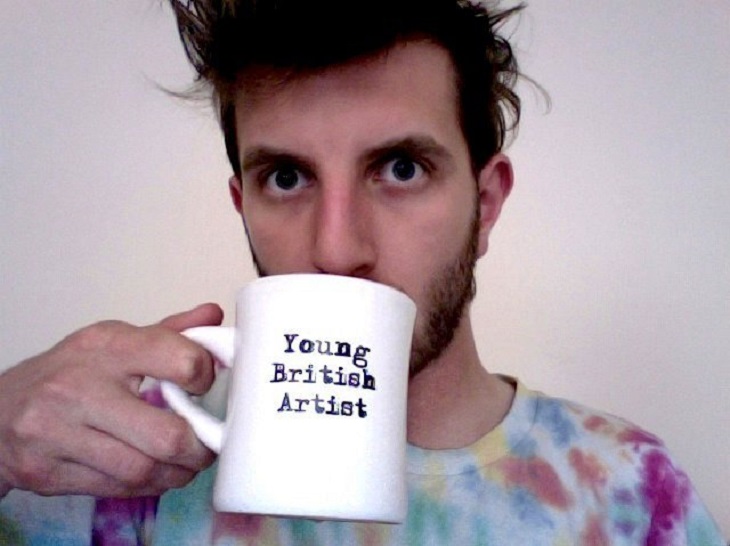 Hayden Kays’ art performs an immaculate fusion of Pop Art aesthetics with YBA sensibilities. His point of reference is the relationship between the present moment in mass culture and the ghosts of the past which still haunt our way of doing and thinking about art. Hayden is about to open a new blockbuster show at The Cob Gallery, which, at the tender age of 19, is the start of a Greatest Hits World Tour.

Hayden is a painter, sculptor and printmaker whose work straddles an impossible boundary between street art and traditional visual culture. Another way of putting it is to say that he is classically trained but ruthlessly contemporary. He has situated himself as an involved, sometimes complicit, commentator on capitalist culture, rather than as an aloof critic of an omnipotent system. His reflections on art and culture are sometimes sardonic, absurd and wry, but they are also revealing, vaguely uncomfortable and almost always true.

The artistic trick that makes this position work – which is, after all, unfashionable amongst young artists – is Hayden’s singular ability to meld image and text: they are clearly semantically related, but that relationship is arbitrary so that you never quite know if the commentary is positive or negative. In Hayden’s world, it seems as if it must be both because that’s the way life really is; it is a hangover from postmodernism – the merging of styles, the intertextual references, the aesthetic – that is so postmodern that it feels deliciously archaic. The typewriter and the digital image merge to create a message that could be from any time but speaks so pointedly to this time now.

Hayden is entrenched in art history, but loves popular culture; he is not stuck in the past but rooted firmly in the present with one eye on all of time. Damien Hirst lurks in every corner, but so do the pop artists of the 1950s, and together they connive to create a series of hard-hitting messages that seamlessly both celebrate and critique the culture industry. It is not high-minded, but it is intelligent; it is not purely aesthetic, but it is not lost in meaning. It is the kind of art we deserve. And this shtick has proved a marketable commodity: Kays’ collectors include Chris Martin, Noel Fielding and the grief stricken Harry Styles. He’s even done an album cover for the Kooks and an art swap with Jake Chapman. 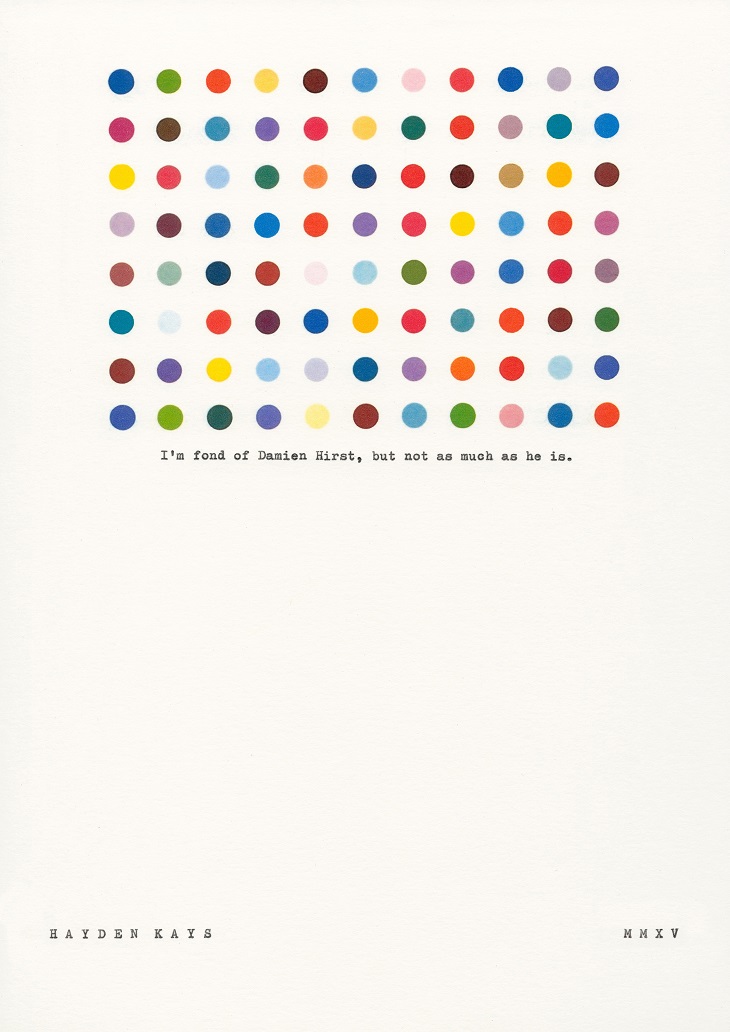 At this point there was supposed to be an interview with Hayden, in which he would regale us with his values and ideas, but he’s busy opening a show in Paris. The upshot of it is that Hayden is pretty decent, no matter who’s talking about him, and you should see his show. He is one of those international artists who you love more than the world. His non-appearance in this interview is some kind of Hirstian gesture towards the absurdity of celebrity, and that’s the way it should be: behind the humour and glamour of those typewriter pieces, there is just a void, the chasm of fame and success, which it is contemporary art’s mandate to decorate and interrogate. Hayden’s work is all about examining this site of conflict in mass culture and is just about the best in its field. His greatest achievement, however, is to have made me write a column in less than 600 words.

The Top Ten opens at The Cob Gallery, London NW1, on 2nd April.

The Currency by Damien Hirst is the artist’s first NFT drop. The Currency is a collection of 10,000 NFTs, also […]