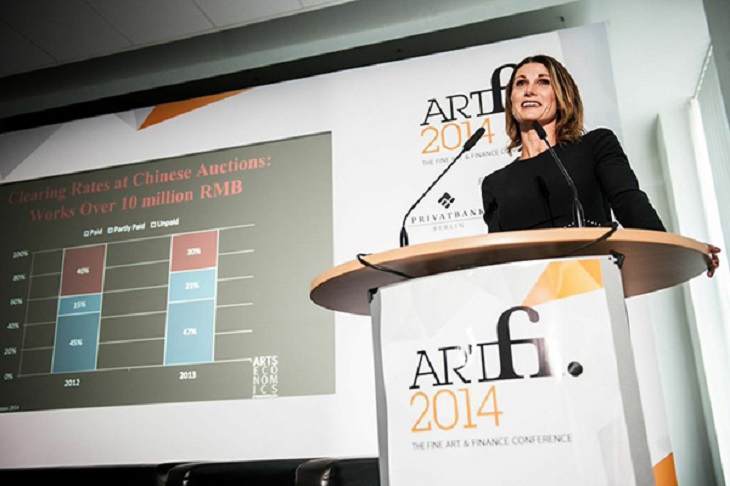 In 2014, the global art market grossed €51billion, which is a 7% increase on 2013 and the highest total ever recorded. These are the findings of Dr Clare McAndrew, who every year compiles the TEFAF Art Market report before jetting off to the one of the artworld’s most prestigious art fairs in Maastricht.

The report is the only comprehensive source for data on art fair and auction sales, and includes educated estimates on gallery and online sales. It is like an annual report for the global artworld that is at once self-congratulatory of last year’s success and a pep talk before the year’s first round of art fairs begin. The financial dealings of the artworld are notoriously secretive, so a lot of the data relating to private sales is estimated by insiders, but it gives a clear overall picture of the state of the market. That picture, year upon year, has been one of rude health.

The vast majority of all that voracious spending occurred in three major regions: 39% in the United Sates, 22% in China and 22% in the UK. At auction, 1434 lots were sold for over €1million, once of which, of course, was Tracey Emin’s bed; I remember being in saleroom at the time and thinking that it was impossible for something so go from 600,000 to 2,000,000 in just half a minute. The prospect was dizzying and the reality of it was incomprehensible – that anyone could have that much money and want to spend it so desperately. There were last year 96 lots that sold for more than €10million – the usual suspects of Bacon, Richter and that breath-taking Gauguin. Galleries and private sales were estimated to account for €26.4billion, 52% of worldwide art sales, so never wonder again what goes on behind those glass doors at Gagosian. And all those art fairs accounted for 40% of sales, proving that in between all the air-kissing and posturing there was time for the world’s galleries to rake in €9.8billion.

What does all this mean? What’s behind these fantastical numbers? I have spent the last year writing this column to work that out and I’m still not sure. I suspect that behind the numbers there is some great art, and I suspect that some of it is worth unimaginable prices, but I doubt that we could come to any general consensus on what the art market’s annual report tells us about art. If pushed, I’d say it tells that there is loads – I mean, gargantuan amounts – of money floating around in the world, and that is spare money that doesn’t need to be spent on anything other than pretty things to keep in a warehouse. And whilst 20% of us might just be lucky enough to see maybe 1% of that art in our lifetimes, 99% of us will never see even so much as a glimmer of that money, which is held by the infamous One Percent.

But it does not tell us – and this is important – that art is a rich man’s game. The 99% percent get by perfectly well without that warm fuzzy feeling that comes from meaninglessly owning twenty Kiefers, four Richters and a few Hirsts. The 99% live intellectually prosperous, love-filled, culturally engaged lives without ever spending very much at all on art; we go to galleries, we see art, we talk to artists, we read books, we absorb all the art that capitalism and history have to offer, and it barely costs us a thing. We can go to whatever we like, like whatever we like and say what we like because we are not constantly sucking up to a gallerist nor are we trying to prove our social worth through the acquisition of stuff (because art, my friends, is just stuff in the end).

And – herein is the perversity of the whole business – in so doing we probably see and enjoy more art, feel more genuine aesthetic pleasure and gain more intellectual insight from art than all those who make up the One Percent and who buy all the art ever will do even if they live for ten thousand years. Behind that astronomically unfathomable €51billion is a simple, but extraordinarily cosy, truth: art is there for everyone and it is available as such, but it has price and if you have a spare €51billion you could buy all the art that was sold last year because art is for sale; but would that make you any happier, or any more culturally enriched? As the Most Reverend Damon Albarn, Archbishop of Britpop, preached: the successful fella who bought a very big house in the country ended up taking all manner of pills and piling up analyst bills, even with Damien Hirst right by his side.