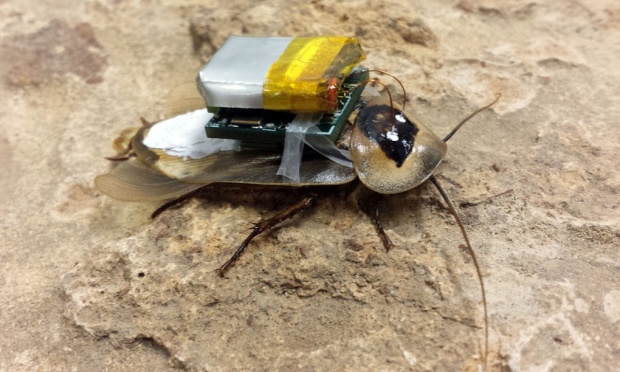 They lurk in dark corners, feed off crumbs, and obey the commands of humans. Years in the making, and a contender for the most revolting creation to emerge from a laboratory, the robo-roach has arrived.

Built by engineers in Texas, the robotic insect fuses a live cockroach with a miniature computer that is wired into the animal’s nervous system. At the push of a button, a human operator can control the beast. Or at least which way it scuttles.

Hong Liang, who led the research at Texas A&M University, said the controllable insect could carry tiny video cameras, microphones and other sensors. With those on board, it could gather information from places where humans would rather not be: collapsed buildings, broken sewers, and the kitchens in student house shares.

“Insects can do things a robot cannot. They can go into small places, sense the environment, and if there’s movement, from a predator say, they can escape much better than a system designed by a human,” Liang told the Guardian. “We wanted to find ways to work with them.”

The US team made tiny backpacks for the cockroaches and stuck them on with paint. Normal glue did not attach to the insects’ waxy backs. Each backpack contained a computer chip that could send signals down a pair of fine wires into nerves that controlled legs on either side of the cockroach. With a rechargeable lithium battery to power the device, the total weight of the backpack was less than 3g.

In a series of demonstrations, the scientists showed how they remotely controlled the direction in which the cockroach walked by stimulating nerves on either side of its body. When cockroaches walk, the three legs on each side move in time with each other. But the electrical pulses disrupt this, making the middle leg fall out of step with the others. The result is that a pulse to the left makes the cockroach turn left, and vice versa.

The system is far from perfect. In tests when robotic roaches were held on little leashes, the insects could be steered about 70% of the time. But when the insects were left to roam free, the remote control worked only 60% of the time. To make them turn could take a jabs of the button. Liang is not disheartened though: the robotic cockroach, reported in the Journal of the Royal Society Interface, is still a prototype.

Working with cockroaches has changed how Liang views the insects. “When I first saw them, my hair stood up. But I went on to keep some in my office as pets for a while. They are actually beautiful creatures. They are constantly cleaning themselves,” she said. Their favoured meal was dog food with water.

How useful robotic roaches prove to be will depend in part on how much gadgetry they can carry. Liang says that some cockroaches can carry five times their own bodyweight, but the heavier the load, the greater the toll it takes on their performance. “We did an endurance test and they do get tired,” Liang said. “We put them on a treadmill for a minute and then let them rest. If the backpack is lighter, they can go on for longer.”

The team are now investigating how to make the cockroaches respond to directions more reliably. Another avenue of inquiry is whether stimulating several legs at once can make the roach stop, start, walk and run on command. One potential problem on the horizon is that the cockroaches might stop responding to the electrical pulses to their legs.

In 1997, Isao Shimoyama at the University of Tokyo, steered cockroaches by stimulating their antennae. The pulses made the insects think they had bumped into obstacles, but over time, the effects wore off as the insects learned to ignore the pulses. Other researchers have gone further than experiments with insects. In 2002, John Chapin, a US researcher, unveiled a remote controlled rat.

Roy Ritzmann who studies how insects climb over, tunnel under, and go around objects, at Case Western Reserve University in Ohio, said that if cockroaches can be controlled for long periods, they could yet prove useful. “There are certainly cockroaches that are large enough and strong enough to carry reasonable payloads for providing intelligence,” he said.

Sethu Vijayakumar, director of the Institute of Perception, Action and Behaviour at the University of Edinburgh, has reservations about the work though. “As much as the technology is interesting, there are a lot of ethical issues before we go down that line, even with cockroaches. Whenever you interface with another biological system, you have to look at whether the means justifies the ends. It’s something we have to debate,” he said.