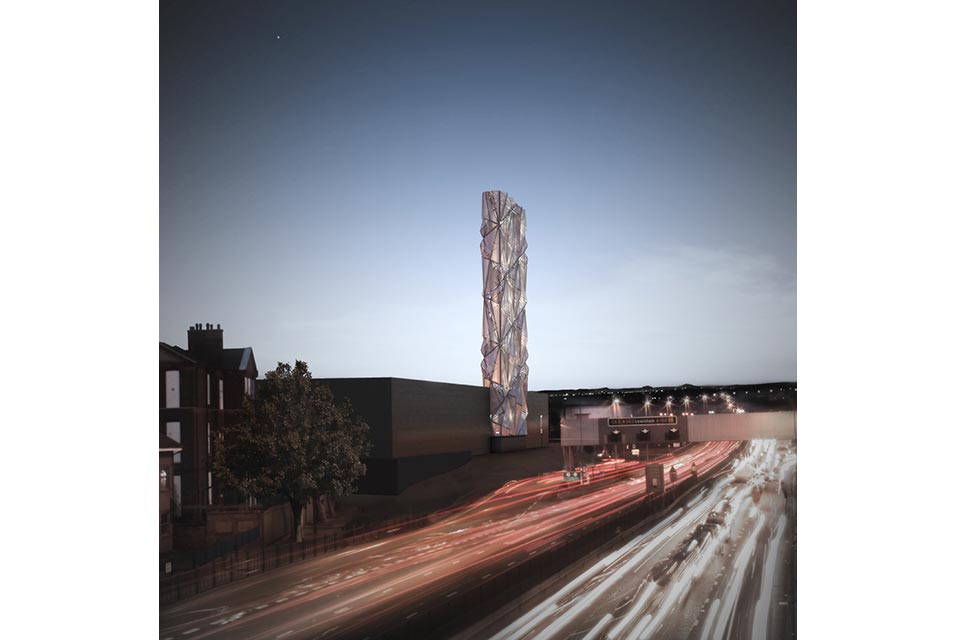 Conrad Shawcross has been commissioned to provide a high profile architectural intervention and his largest public commission to date for the entrance to Greenwich Peninsula in the Royal Borough of Greenwich. This commission will reimagine the 49 metre high tower which forms part of a new Low Carbon Energy Centre designed by CF Møller Architects due to be built on Greenwich Peninsula in 2015 and completed in 2016.

Shawcross’ response, which is titled Lenticular Dazzle Camouflage, unites sophisticated engineering and complex optic research to create an impressive sculptural concept on a huge scale. The artist’s intention is to create an ambiguous and beguiling surface that disturbs and dematerializes the massing of the tower structure, producing a form that remains abstract and hard to define yet one which could potentially become a talking point for the local and wider community. The design uses both First World War ‘dazzle camouflage’ – the paradox of camouflage whereby objects that are supposed to be hidden are in fact made both more visible and arresting – and ideas found in Cubist and Futurist paintings in which an object’s surface is broken up, creating false perspectives and vanishing points.

The cladding for the structure will be formed of hundreds of triangular panels, each the height of a London bus. These tiles fold and flow across the surface of the tower forming complex geometric patterns that visually break up the flat planes to create an uneven, sculpted surface that plays with the vanishing points and perspective, and leaves the viewer unsure of where the form begins or ends. The panels are perforated so as to exploit the phenomena of the Moiré Effect and create an object that changes in appearance when it is viewed from different locations or vantage points and at different times of the day. As the two main surfaces of the tower sit east to west, the structure will filter the light of the sun and sky enhancing both the form and the visual effect of the Moiré. At night an integrated lighting design will produce a shifting series of ‘compositions’ lit from within the structure.

It has been hugely interesting and rewarding to respond in a more architectural way to this very unique brief. My visual solution has been driven by a genuine desire to create something beautiful but beguiling. One key issue I have remained very conscious of and have used as a driver for the idea, is the fact that this a low carbon Energy Centre for the Peninsula and so the lightness and efficiency of the structure and form has been at the core of my thinking and the development of the design.

Imbued with an appearance of scientific rationality, Conrad Shawcross’ sculptures explore subjects that lie on the borders of geometry and philosophy, physics and metaphysics. Attracted by failed quests for knowledge in the past, he often appropriates redundant theories and methodologies to create ambitious structural and mechanical montages, using a wide variety of materials and media . often cloaked in the aesthetic of the rational and the designed, his machines and structures remain enigmatic, filled with paradox and wonder. Some have an absurdist melancholy feel, while others tend to the sublime. Further aspects of his work investigate idealised geometry , the mathematics of music and the philosophy of number.

Shawcross was born in 1977 in London, where he currently resides and works. In 2013 he was elected a Royal Academician and is the youngest living RA . He has recently had solo presentations at ARTMIA Foundation, Beijing (2014); the Roundhouse, London (2013); Palais de Tokyo, Paris (2013); MUDAM, Luxembourg (2012); Science Museum, London (2011 – 2012); Turner Contemporary, Margate (2011); and Oxford Science Park (2010). His work has also been exhibited internationally at institutions and events including the Royal Academy, London (2014); Mofo festival, Museum of Old and New Art, Tasmania (2014); the 55th Venice Biennale (2013); Grand Palais, Paris (2013); Hayward Gallery, London (2013); KW Institute for Contemporary Art, Berlin (2012); National Gallery, London (2012); Weizmann Institute of Science, Israel (2012); Centre d’Art Bastille, Grenoble (2012); Museum of Art, Rhode Island School of Design, Providence (2011); Park De Oude Warande, Tilburg (2011); Palazzo Fortuny, Venice (2011); Gervasuti Foundation, Venice (2011); CA2M Centro de Arte Dos de Mayo, Madrid (2011); Museum of Old and New Art, Tasmania (2011); and Kunsthal in Amersfoort (2010).??Shawcross’s first public realm commission Space Trumpet, installed in the atrium of the refurbished Unilever Building in London in 2007, won the Art & Work 2008 Award for a Work of Art Commissioned for a Specific Site in a Working Environment, and in 2009 he was awarded the Illy prize for best solo presentation at Art Brussels. From 2009 – 2011 Shawcross was Artist in Residence at the Science Museum, London. In 2012 Shawcross, along with Chris Ofili and Mark Wallinger, was invited to create works inspired by Titian’s masterpieces for the project Metamorphosis: Titian 2012, an ambitious collaboration with the National Gallery and Royal Ballet for the Cultural Olympiad. The artist’s robotic installation The ADA Project was in residence at the Vinyl Factory Space, London, during October 2014 for a collaborative series of projects, and his work Timepiece has served as an anchoring symbol of the 2014 – 2015 concert season Interplay at Berwaldhallen, Stockholm. www.victoria-miro.com/artists/13-Conrad-Shawcross 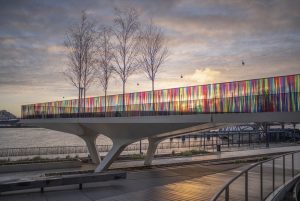 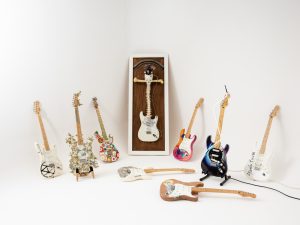