In a downstairs room at The Mosaic Rooms in west London, Birkin’s Profiles series are displayed as part of his solo show titled Mouths at the Invisible Event. The works are all photograms on x-ray light boxes, each a different shade of red. While working with Iraq Body Count, Birkin became aware of the huge photographic gaps in the record, comparing this to the loss of US or British soldiers who are remembered by a photograph in the paper or an interview with relatives. The database was set up by director John Slobodo to address the massive gap in this type of information for Iraqi casualties. Birkin is also interested in the history and context behind the database.

“General Tommy Franks was asked very early on, after the invasion of Afghanistan, how many civilian casualties do you think there were? He famously replied, we don’t do bodycounts – that was a lie it turned out, which we know from Wikileaks. The US army do do body counts, but they just don’t release the data. It was a departure from the policy in Vietnam, this is something Julian Stallabrass writes about, where the enemy dead were obsessively charted as a way of measuring the war – the more Viet Kong dead, the better we were winning the war. That obviously backfired spectacularly and the public opinion went against the war. Now the policy is to try and hide and obscure the enemy dead as much as possible.” While body count is associated with warfare, it was the humanitarian value of the individuals documented within the database that activated Birkin to make the Profiles series.

“In the first Gulf war, a lot of Iraqi soldiers were just buried in the sand and their loved ones still don’t know what has happened to them. We still don’t know their identities, so John Slobodo in starting up the database was trying to address that. To provide as much information for each casualty so they weren’t just a statistic, they were treated as human beings. Part of that was for the sake of the families and part was for the sake of history, so they would be recorded. But what it doesn’t do is address the lack of photographic record.” 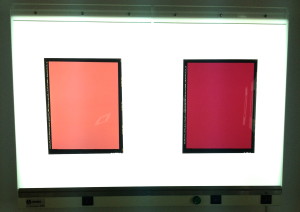 Birkin needed to find a way to represent the people on the database in a unique way and returned to his background in photography for the solution. Birkin previously embedded with troops in Afghanistan as a war photographer and won the Sovereign art prize in 2010 for a series of performance photography.

“I realised the database identifies a six digit number for each casualty and in digital photography when you have a colour in photoshop you have a six digit number, the first two are red, the second two are green and the last two are blue, so I began with a very simple process of taking the numbers and putting them into the digital colour space to generate a unique colour for each person. They all came out red because the identication was always two letters and four numbers. Letters have a higher value than numbers and the first two being letters means you always have more red.” It was therefore a complete coincidence that each person came to be memorialised in a shade of red, a colour reminiscent of war, the colour of blood.

“They’re shown on these x-ray lightboxes, pieces of medical equipment that were being discarded from British and American hospitals. They’re still very current in hospitals in the developing world, and particularly in Iraq, but they’re equipment which is now redundant in the West. I just got them from salvage, people gutting hospitals and replacing equipment.”

The works do not attempt to substitute or replace a photograph, that was a goal Birkin knew he could never achieve.

“In a way, they are a series of failed portraits,” he says, “blanks in the photographic record, non-images.”

I asked Birkin if this was the extent of the series.

“There’s just 30, and that’s a question I ask myself a lot. There’s about 120, 000 people on the database and that’s a very conservative estimate, because that’s only documented people, the actual figure is a lot higher. So how do you adequately respresent all those people? I had no idea. I thought of trying to work with a computer programmer to come up with an algorithm to automatically convert each ID into a colour and display them on a website, but in a way, failure is always going to be an inherent part of the work.”

Profiles is on display at David Birkin’s solo show Mouths at the Invisible Event at Mosaic Rooms, London, 16 January to 28 February 2015 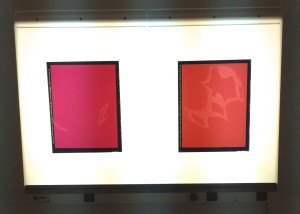