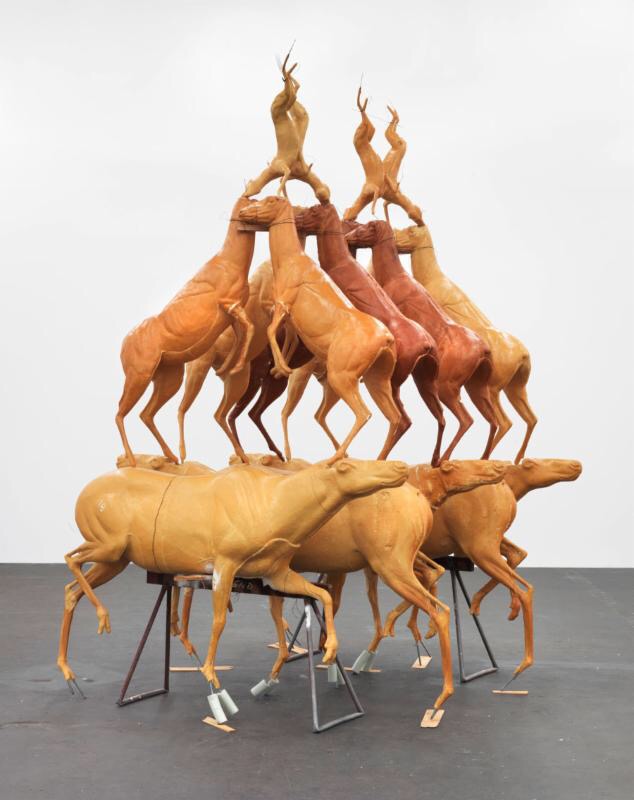 The carnivalesque arrangement of these alien creatures made out of acid-yellow polyurethane evokes the dichotomy of nature and sport: four upside-down foxes crown graduated rows of deer and caribou, eerily featureless–even ambiguous–without their prized pelts and horns. The entire ensemble is visibly cobbled together with wire, the work of a morbid puppeteer. Like the preceding work Carousel (1988)–where dismembered taxidermy forms hang and drag from a steel axis that turns in an agonizing danse macabre–Animal Pyramid disturbs with its vision of carnage submitted to an artificial and bloodless geometric order.

The work’s stemmed violence also probes the unsettling gap between real and surrogate, a common cultural obsession from the fetish objects of West Africa to the dismembered mannequins of Hans Bellmer and Cindy Sherman, and Maurizio Cattelan’s melancholy take on the Bremen Town Musicians. With Animal Pyramid, Nauman’s meditations on the fraught human condition within a larger world ecology take shape in the very materials by which living nature is transformed into still life.

In 1990, the Greater Des Moines Public Art Foundation commissioned a cast bronze version of Animal Pyramid. It is installed in the grounds of the Des Moines Art Center, Iowa.