‘Winter Lights’ brings installations and impressive artworks from 11 internationally acclaimed artists to the Canary Wharf Estate. This interactive, hands-on festival of light will see the landscape transformed into a dazzling stage of sculptures, lasers, projections and digital art from a variety of artists including the UK’s Stephen Newby, Cédric Le Borgne from France, German design duo Heidi and Bernd Spiecker and Hungarian born artist Bálint Bolygó. 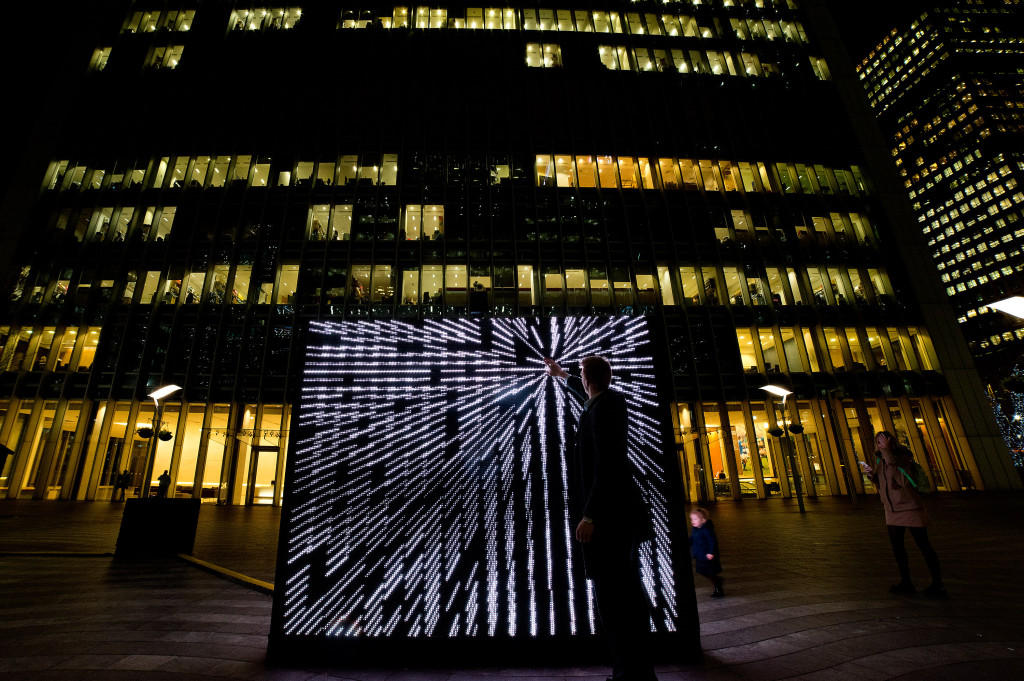 ‘Control No Control’ in Montgomery Square is an interactive LED sculpture by Daniel Iregui which invites its audience to get involved, using their hands and bodies to create sounds and graphics. An immersive and thought-provoking exhibit, the audio- graphical compositions conjure geometric patterns and audio representations in response to the simplest bodily gestures. 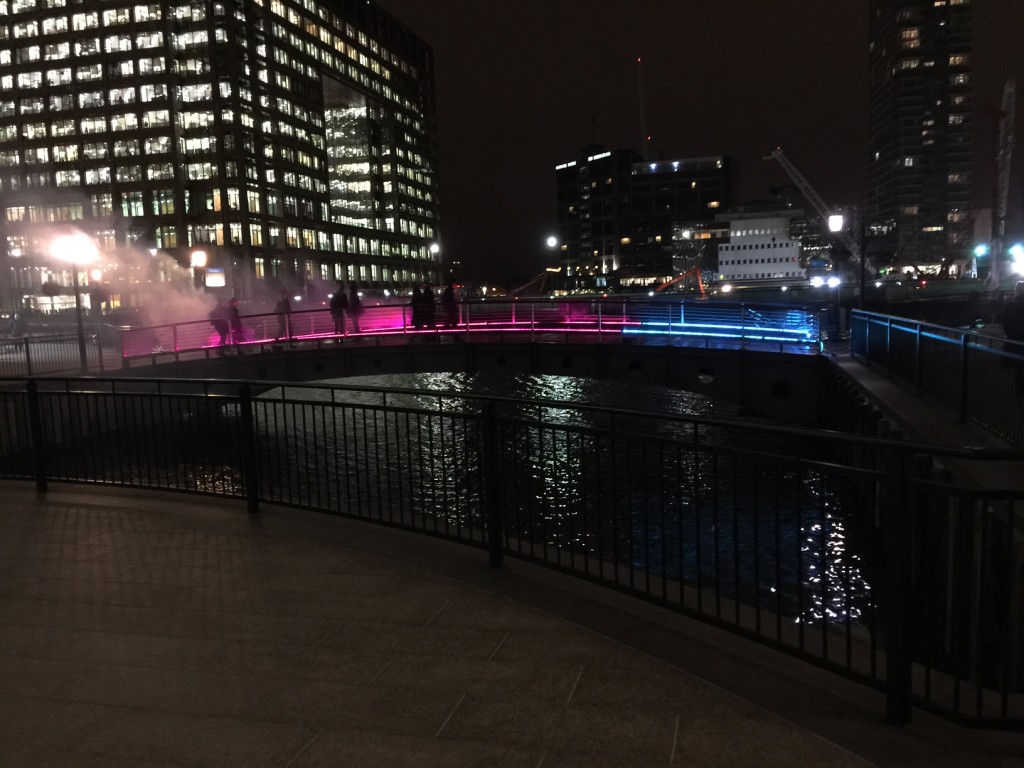 ‘Playable City’, an installation by Tine Bech, is a breath-taking sight which brings together light and water, located on Cubitt Steps Bridge adjacent to Middle Dock. As people walk across the bridge, bursts of pink fog are omitted and hidden lights illuminate the way along the route. Visible from afar, this installation artwork immerses participants in an ethereal pink light as they cross over the water. 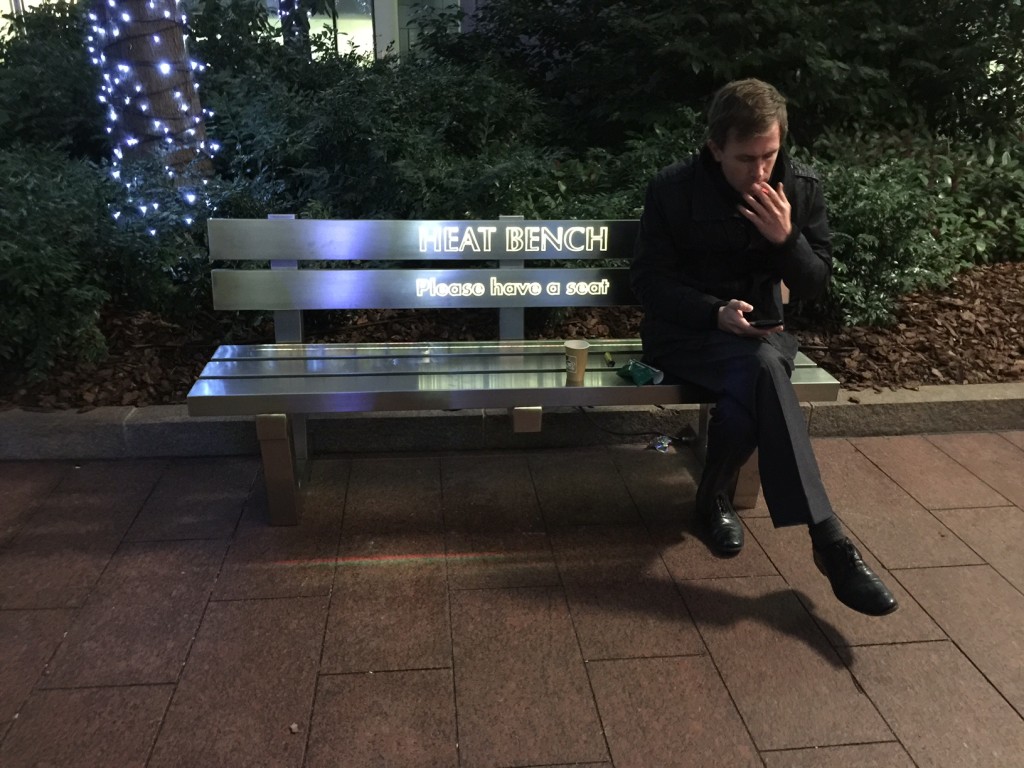 Canada Square Park hosts a ‘Lightbench’ and a ‘Heatbench’ by LBO Lichtbankobjekte – park benches with a twist. These two benches, one luminous and the other heated, add a new dimension to the experience of taking the weight off your feet and settling down in a public place. Encouraging one to reflect on the simple act of sitting down, the installation provides a comfortable seat to watch the world go by and the skaters gliding across the adjacent ice rink, as well as an opportunity to alter the colour of the Lightbench. 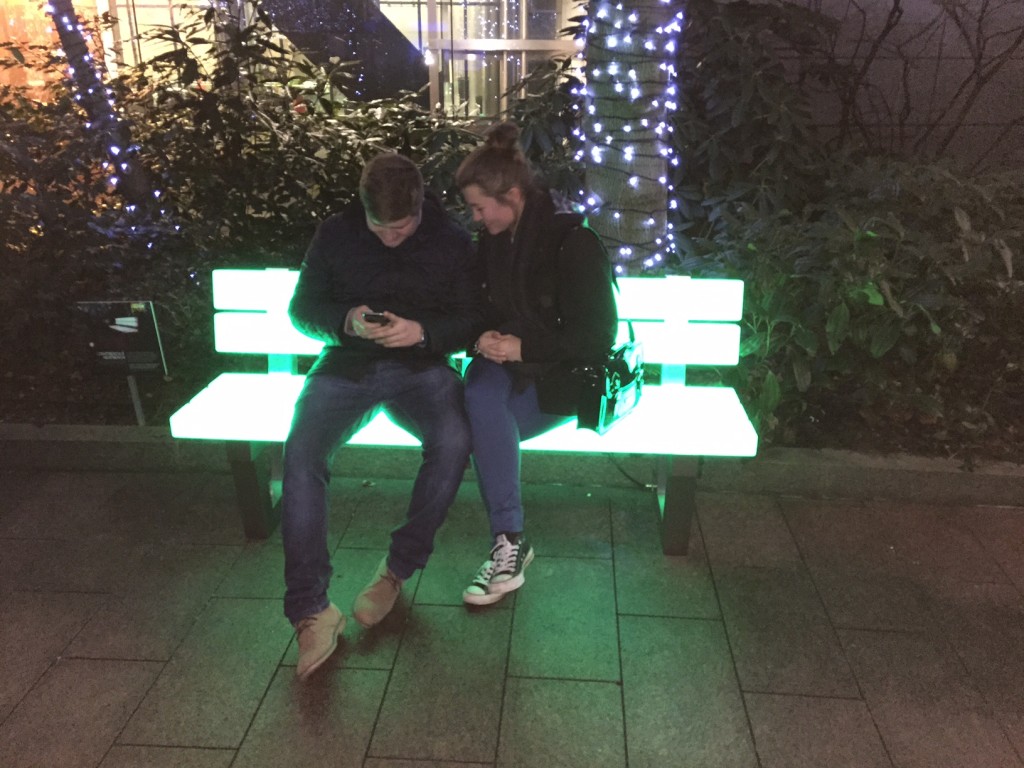 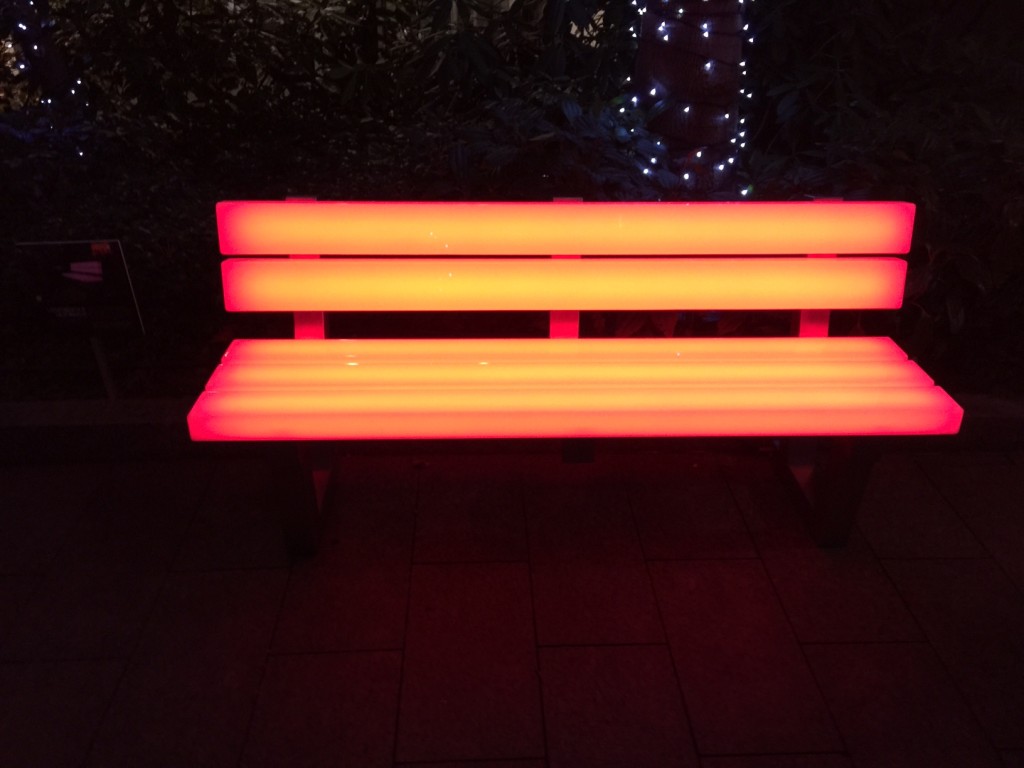 ‘Ice Angel’ is an interactive artwork by Dominic Harris and Cinimod Studio, providing participants with a glimpse of themselves depicted in angelic form. Inspired by children creating angels in fresh snow, Ice Angel utilises a performance portrait device to create celestial images as each participant is paired with their angel identity. 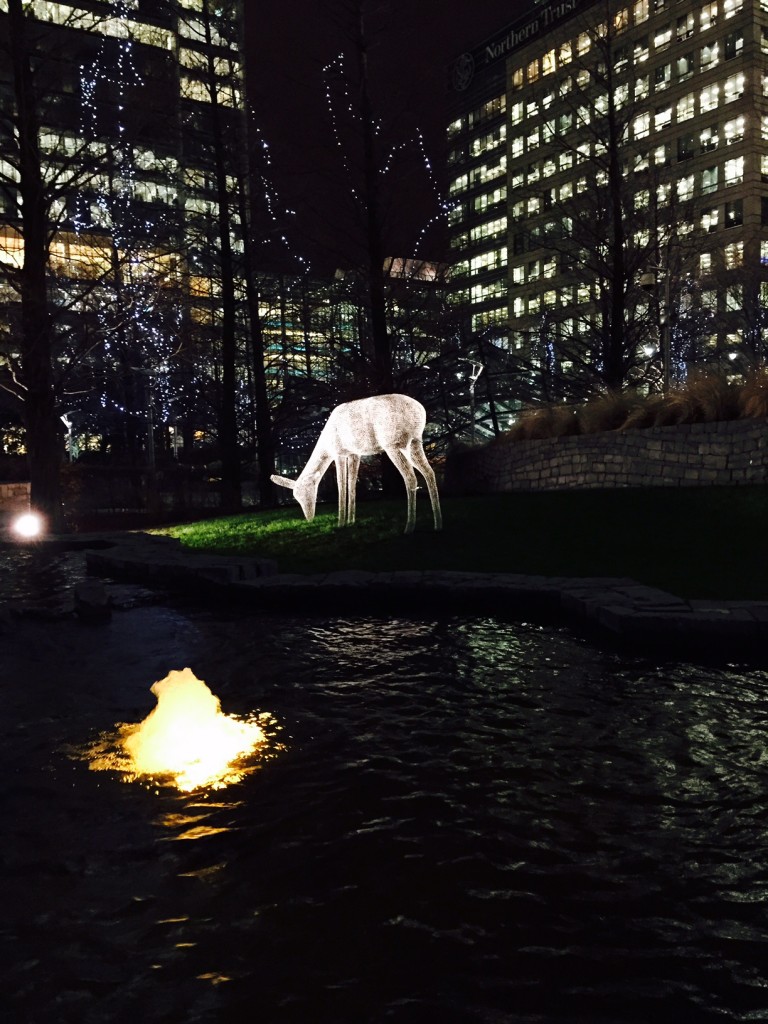 These are just a few of the stunning works of art being exhibited right across the estate in January, along with ‘Binary Woodwork’ by Raoul Simpson in Montgomery Square, ‘Lily Pads’ by Ela Brunel Hawes in Jubilee Park, ‘ and ‘Infinity Pools’ in Middle Dock by Stephen Newby creating a highly ‘illuminating’ artistic experience. 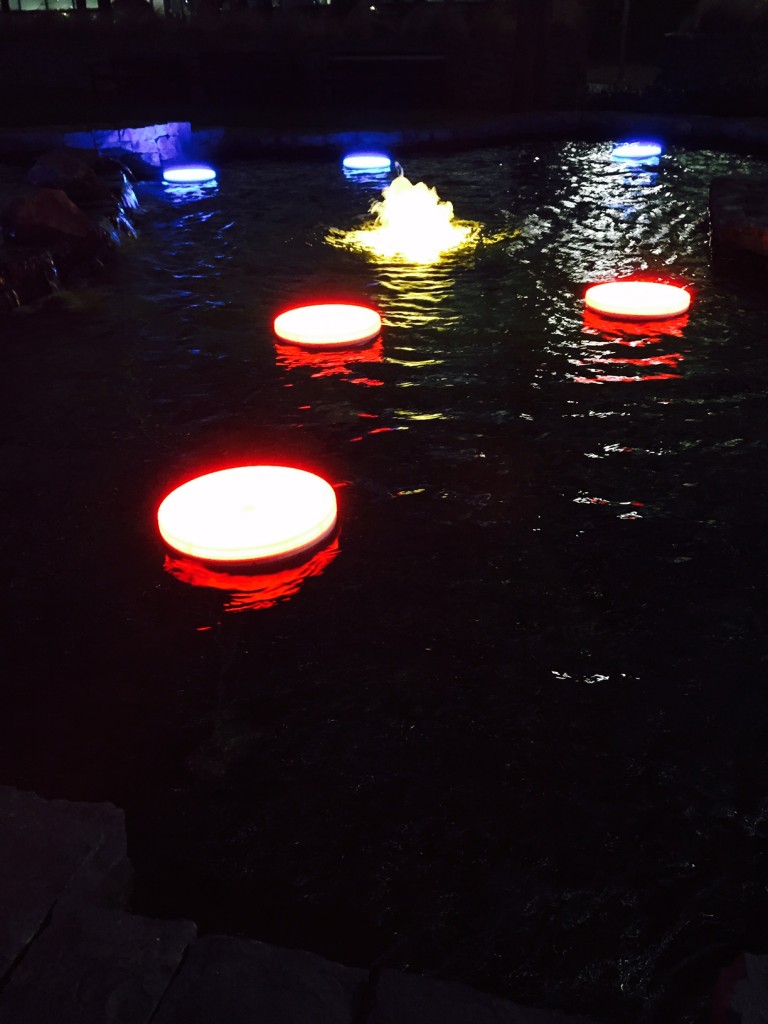 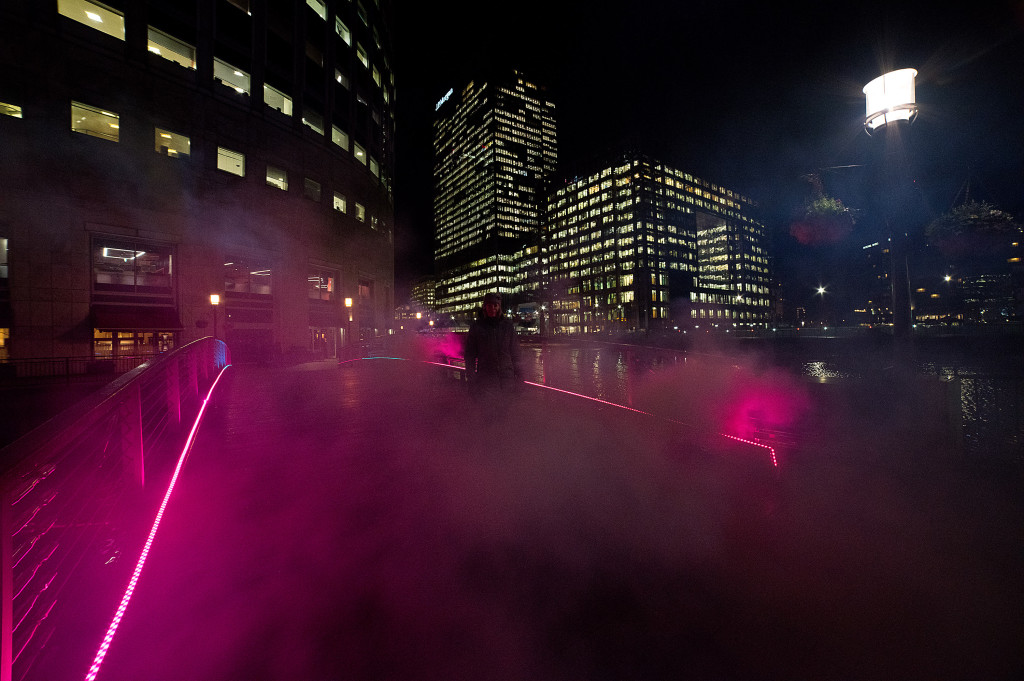 PREVIEW: Art That Has a Life of Its Own: Kinetica Art Fair 2012

Living artwork, creations that come to life and experiential installations will be on show for the fourth Kinetica Art Fair.