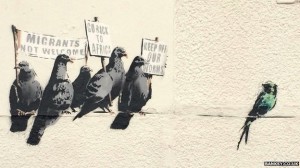 Local elections can cause emotions to run high in even the most level headed populace, with unpredictable outcomes. An otherwise unnoticed council by-election in the small coastal town of Clacton-on-Sea has suddenly gained unwelcome attention with the news that the newest work by Banksy, a mural showing a group of pigeons holding anti-immigration banners, has been destroyed following a complaint the work was “racist”.

The BBC reports that the mural in Clacton-on-Sea – where a by-election is due to take place following the local MP’s defection to rightwing party UKIP appeared this week. It showed four pigeons holding signs including “Go Back to Africa”, while a more exotic-looking bird looked on.

The local council, which removed it, said it did not know it was by Banksy, and that it had received a complaint that the mural was “offensive” and “racist”. 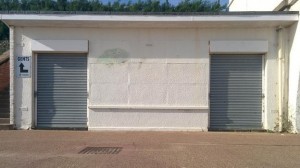 The council had removed the work before the artist, who chooses to remain anonymous, posted an image of it on his website. 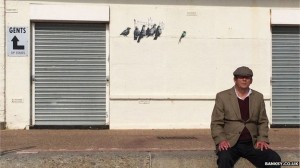 (this man is not Banksy)