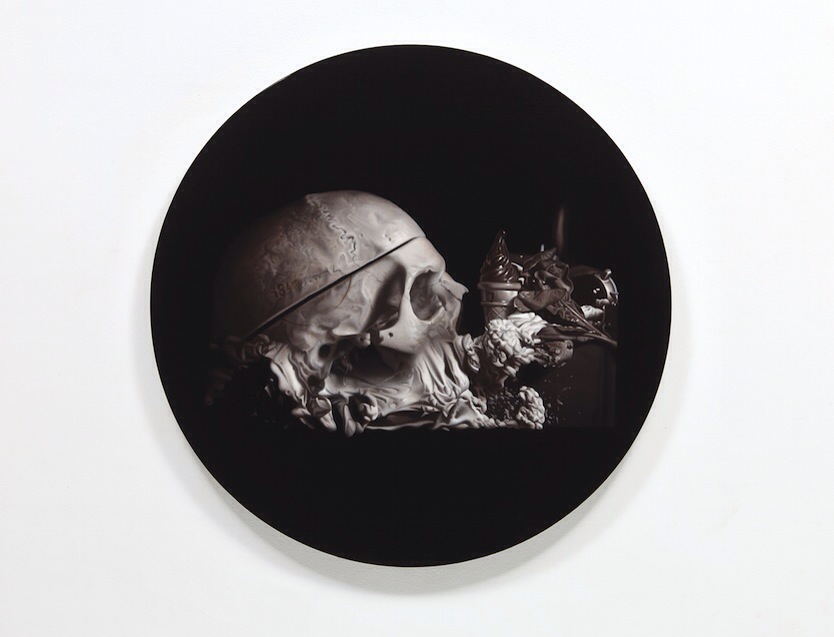 Known primarily for an ongoing series of photorealist portraits depicting his partner Zuzana, which have been exhibited internationally, Martinec’s new project is a series of large-scale monochrome paintings, collectively entitled ‘Every Minute You Are Closer to Death’. These technically astonishing works depict carefully contrived compositions that play with the archetypes of the devotional picture and the vanitas. Traditional signifiers of mortality such as dead animals, skulls, candles and empty bottles are mixed with contemporary references such as Damien Hirst’s notorious diamond skull displayed on a tablet computer, a digital radio, party balloons and cotton buds. In many of the paintings the subjects are distorted by shaving foam, a contemporary substance which appears solid but which is actually fluid and mutable, and which evokes both vanity and impermanence.

About The Artist
Hynek Martinec is currently exhibiting in the John Moores Painting Prize 2014 at the Walker Art Gallery, Liverpool, as part of the Liverpool Biennial. In 2015 he will have a solo exhibition at the prestigious Vaclav Spala Gallery in Prague. Martinec was included in Beyond Reality: British Painting Today at the Galerie Rudolfinium, Prague in 2011 and the Prague Biennial in 2009. He was included in the BP Portrait Prize exhibition at the National Portrait Gallery, London in 2007, 2009 and 2013, winning the Young Artist award in 2007. Martinec’s work is in private and public collections including the National Gallery, Prague and the British Museum, London. Martinec lives and works in London.