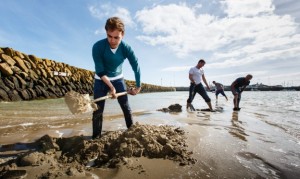 In a town whose faded seaside glamour is both complimented and disturbed by a swath of public art, it is only at low tide that the feverish digging can commence. A swatch of beach that in the morning looks like the realisation of a grim prophecy in a Morrissey song is by late afternoon swamped by an ecstatic crowd. Michael Sailstorfer has buried £10,000 worth of gold bullion in the unforgiving sands of the Old Harbour.

This not a practical joke or the return of pirates to the English seaside. It is the jewel in the crown of the 2014 Folkestone Triennial; a radical experiment in relational aesthetics that looks more like a publicity stunt than a serious work of art. Folkestone is a town that has been hit hard by recession, struggling to recover on a local level from an international catastrophe. It is populated by empty shops and streets where the salty winds blow metaphorical tumbleweeds; the indigenous people are a mix of the middle classes whose survival has been always already guaranteed by their London-centric worldview and poor, listless people who lurch from one problem to another completely derelict in their own town that has been brutally swept over by an economy that moves too fast for them.

But Folkestone has a much bigger, more deeply ingrained problem that clings to it with an air of genetic necessity. It was not built for these times: it was never prepared for global recession and it was not even furnished with any mechanism by which it could deal with the postmodern world, a world beyond Victoriana, seaside holidays and localised business. It was built on the well-meaning Utopian notion that nothing would ever change – the world and its markets would never expand, people would never look further than their doorstep for entertainment and fish n chips would always be dish of the day.

As the Thatcher-Reagan years ushered in a globalised, free-market economy, gathering together all the desperate elements of the world into ever more centralised pools of activity, towns like Folkestone buckled. They remained petrified, dysfunctional fossils of bygone days, so that now Folkestone looks like a film set, built only as the backdrop to the Trienneal, which slots public art commissions in the fabric of the town as if it is both an eternal part of its heritage and a strange tonic for the ongoing malaise. The initiative is a good-hearted use of the high-minded vision of contemporary art as a source of enrichment in times of woe.

There is a difficult sense that art is sincerely trying to make an urgent political statement, The Triennial has commissioned some strong works, such as Andy Galsworthy’s inaccessible cracked clay steps and Tim Etchells’ subtle neon intervention into the derelict Old Harbour Railway station. They subtly evolve from the landscape of history and memory, gathering in together a sense of the past and intimating a direction for the future. This is public art at its best: unobtrusive, clever, aesthetically refined site-specific engagements with a community which needs both hope and direction.

But Sailstorfer’s goldrush risks losing all of that in the hubris of participation by providing a mass public not with something to see but with something to do. Participatory art is difficult because it is so easy: this ongoing post-historical phase of art which allows that anything goes means that an artist can decree any old activity a work of art; and the very 21st Century obsession with sharing every gruesome detail, combined with that local sense of public engagement that institutions cynically use to justify themselves.

The ease of creating participatory art like this gives way to two difficulties. First, it tends to look like little more than pure sensationalism, especially in the context of a sincere cultural event like the Folkestone Triennial where such a well-targeted publicity stunt not only takes over the limelight but also belittles more earnest artworks in the programme. The very real danger is that nobody in Folkestone will remember this Triennial for anything other than the way it sent them down to the beach to dig for their dreams. And second, when people are so engaged in a thrilling, hopeful activity like digging for gold, they are apt to forget that they are in fact engaging with a work of art, so engrossed as they are in the task in hand. This effect plays on the basic ignorance of the townspeople about contemporary art, utterly failing to enlighten them about art, essentially making them neither wiser nor richer at the end of it.

The particular difficulty with the Sailstorfer stunt is that it takes advantage of Folkestone’s poverty. Under the illustrious cover of contemporary art, it sends people to the beach at low tide, full of hope and bound for disappointment. This is not art in the service of the betterment of the community, it is art in the service of the headlines, failing on an industrial scale to bring hope, enrichment and greater understanding to the people. And one lucky winner only spurs on the rest towards their own disillusion The people of Folkestone are being used as pawns in some bizarre game of art chess, the end game of which is that the town remains in check and the artworld pulls its final moves towards another effortless victory.