If you have read any major publication (Huffington Post, Mirror, NY Daily News, Metro, Inspiring City)  in the last 2 days you have probably heard about the chicken gimp suit and the artists behind it – Lewis G Burton (the man in the suit) and Victor Ivanov (the one who made it).

I met Lewis G Burton and Victor Ivanov in Spring 2014. Viktor was in between projects – his chicken skin teddy bear just gone viral and he was preparing to take it a step further and make a full body suit for Lewis – a performance artist and member of the London Yeast Cabaret Club. The art historian Jevgenija Ravcova and I spent most of March and April in Viktor’s studio documenting the making of the chicken skin suit, and a few weeks ago we met up again for the sum up interview, which you can watch above, where we discussed the suit and it going viral as an integral part of the work. 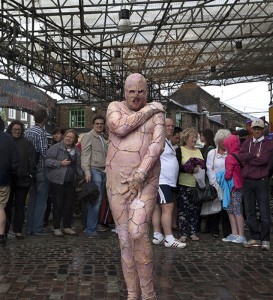