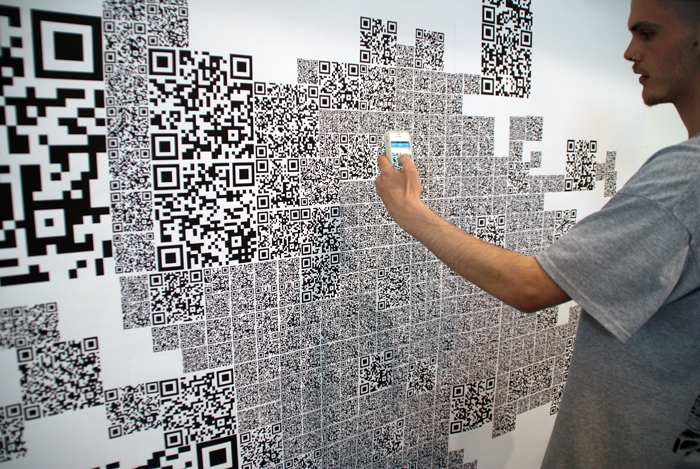 Hi Perry, How are you?

Great! What have you been up to this week?

This week I’ve spent most of it on the southwest coast with my girlfriend, brother and parents. Catching up, enjoying the weather and surfing what little swell we have had (in the water). I arrived back in southwest London yesterday (Tuesday) and since then I have been hand printing clothing for orders I have received this week from a ready-to-wear and accessories brand that I run to pay the bills. I have also been surfing the net, arranging getting an 18 hour bus trip to Austria to arrive next weekend. Where I will be study with a number of artists at ‘Salzburgs International Summer Academy of Fine Art’ for two weeks, through a study grant I received last month.

So you are part of the Post Digital Exhibition at the moment at DegreeArt.com, what does Post Digital mean to you, as a term?

Yes I am one of the nine artists currently showing at DegreeArt.com ‘Post Digital – Are we there yet?’ I’m quite an honest person and I have found it hard to get my head around, not understanding it completely myself. But I guess this is the process of working as an artist, If I completely understood it why would I do it. So far I have come to a brief conclusion, that it is the reliance of digital devices, the control that they have over their users and how their historical values can somewhat reflect our ancestors.

Your work incorporates technology in a very clever way, when was this idea first conceived?

I’ve found it very hard to appreciate (a lot of) contemporary painting, not that I don’t understand how too throw education, but I don’t see why it’s so important in such a fast paced environment we live in. I think this is because I have been such a fast paced person most of my life, not fully appreciating historical or other values of something that can’t just be seen, whilst in-front of you. Leaving a quick response is important to me, similar to how we go about our daily lives on social media, Blogs etc. limited to what we can say and communicating with the few sentences we are allowed in the word count.

Anyway I wanted to create paintings that engaged the audiences, in similar ways to Instagram and similar apps. We are the pieces of the puzzle that assist the devices and application to its success, by being engaged, quickly for a period of time that suit us. It also adds another level of complicity to painting, why not text it? Tell it what it thinks? Leave it a voice mail? Communicate with the work from another country? I know this may still be very basic in terms of the integration of newer technologies, but I will carry on developing this work. 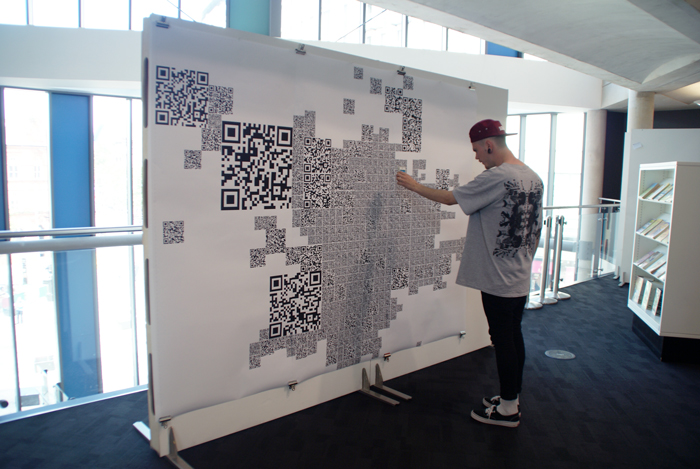 Have you always used technology in your work?

Yes everything I’ve ever used has probably been a technology from old fabrics to a paintbrush. I would say the use of newer technologies only in the last year. There is just so much more to explore and discover, it has also become a lot more accessible and cheaper which is an advantage for artists and designers.

You use a mixture of complex and simple technology within your practice, how have you learned to do this, and what drives you to mixing the two levels of technology?

A lot of what I have learnt has come through the use of YouTube and Forums; I wouldn’t know or have half the patience to learn what I have without these quick and easier methods of understanding how to tinker with objects. A lot has also blossomed from my own ways of thinking also an interest in placing two foreign entities together to see what reaction or outcome takes place.

By creating these constantly evolving pieces, does there ever come a time when you disconnect the piece and feel it is finished?

At the moment it is currently controlled by the time period of the Exhibitions. But I would like to leave it more down to chance, being able to let the works run and do what they have been told to do, based on an audience assisting.

How do you go about choosing the colours of ink used in your work? Do you reposition the bottle to create different effects?

The colour currently reflects the space the paintings have been shown in. Only the cliché white walled spaces, so all the ink has been darker shades, so they can intrude the space and make some kind of mark on the walls and floors, which can be quite thrilling. I haven’t currently repositioned where the ink is released, I do plan on creating more works that have multiple ink releasing areas with different colours activated through websites and emails to insert another method of engagement to my paintings.

I read that you initially came from a mathematical background and you left business school – does this influence your work in any way?

Yes, [it] always has. I studied for sometime at Cardiff University I enjoyed the work, but I didn’t want to spend my time studying business. It has influenced the way I make [work] including controlling finances to work on projects, maybe after an idea has become very dry knowing how to aim it at an audience and some of the knowledge that goes into the production of work. Working with numerical and visual language has always been something I have had a talent within.

How do you feel the relationship lies between man made and technology assisted art? 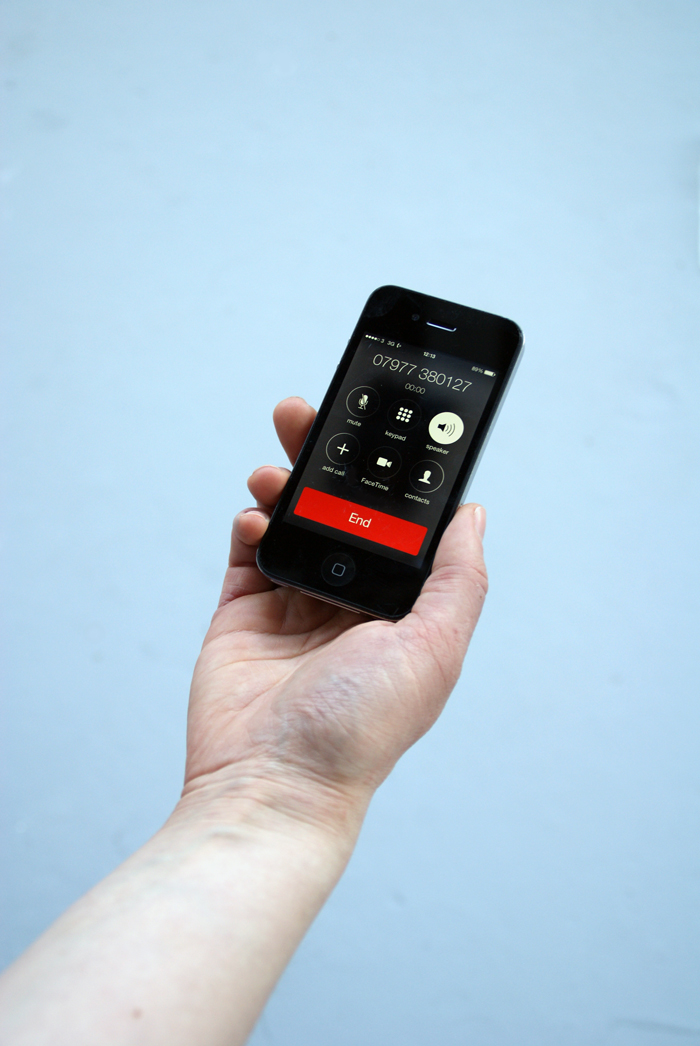 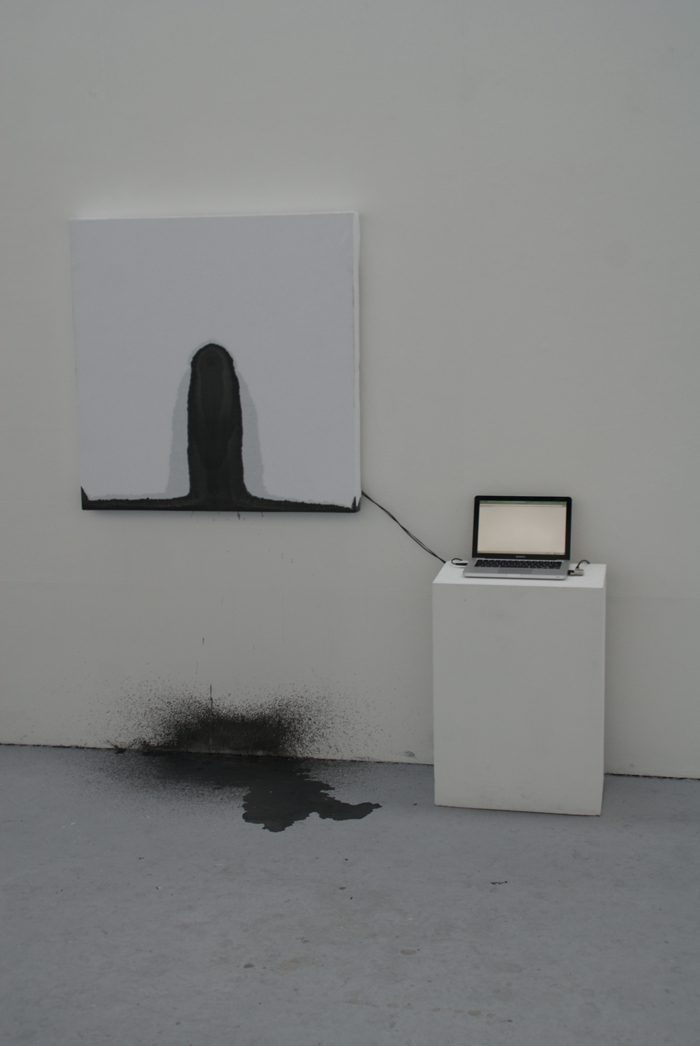 I’m always excited about the future of art and technology. First of all I feel we should be more critical about ‘black box’ devices. Introducing the use of digital devices to galleries, museums, and other public spaces is very important, not just to assist the viewer, but for the viewer to understand. I attended the ‘FutureEverything’ Conference in Manchester a few months back, and the fact [that] curators from flagship museums were discussing how we document, achieve and display iPhones and Applications in our institutions must mean we are moving toward a richer understand of the tools we use and engage within the present.

It has been good to access and be involved in the relay; the positives being, you can communicate with others whenever you feel its right. I can always be on the move, yet working on the show. Which is probably something quite new.

The problems are, you can become too comfortable with what you are working on and not fully engage just using a computer screen. It’s always good to be in a physical space with someone discussing ideas. Added pressures and new landscapes are important when making and communicating ideas.

Perry-James Sugden’s work will be exhibited at 12a Vyner Street gallery until 14th August 2014.