ART STUFF on a train # 63: ‘Monitor as Star’ - FAD Magazine
Skip to content 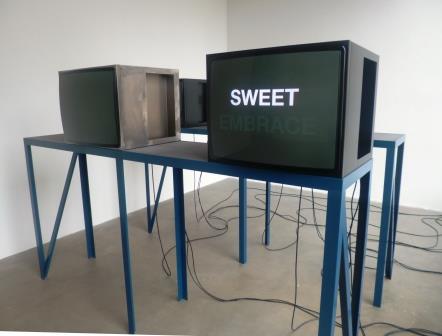 When visiting Tate Britain – as you really should while Phyllida Barlow is in regally ramshackle occupation – pop into the Chelsea Space opposite. For The Block and Charlotte Prodger’s ‘Markets’ (to 26 July) the video monitor takes centre stage. A monitor might be described as a means of showing films which has an industrial rather than domestic identity, and which isn’t equipped to receive a broadcast signal. None has ever been commercially produced for art exhibition purposes, but the Hantarex MGG (1989-2005) and the Sony Cube (1986-96) gained a reputation as good vehicles for art prior to the rise of the flat-screen. That stemmed from such features as an absence of visually intrusive frontal controls, a minimal frame, and an integrated handle for ease of lifting and stacking. Now The Block, set up by Matthew Fitts with the primary purpose of acquiring and refurbishing those two obsolete monitors, has designed and produced a hybrid, splicing their qualities. Charlotte Prodger (Turner Prize shortlist 2017, you heard it here first) makes minimalist but canny use of them. She broadcasts the fascinating story of how Gertrude Stein (or was it her new lover, Alice B. Toklas?) corrupted a text’s meaning by replacing every ‘may’ or ‘May’ with ‘can’ or ‘today’ in order to avoid reminding herself of ex-lover May Bookstaver. Meantime the four screens make somewhat Stein-like concrete poetry from the names of horses related to one part-owned by Fitts, as if to suggest a parallel substitution move. But those smart, sculptural monitors are the stars…