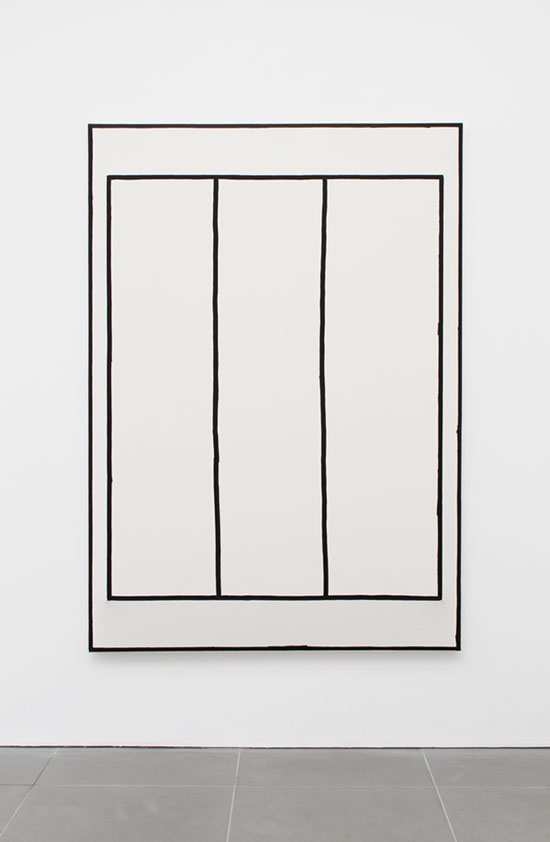 Rod Barton is showing a two-person exhibition featuring Dean Levin and Oliver Perkins. The new works are presented on either side of a wall that demarcates the gallery as two separate, yet permeable spaces. Each artist’s work stands autonomous, yet is linked conceptually through its ability to challenge notions of perception through subtle material reconfigurations that confuse our optic reading of painting’s conventionally two-dimensional surface. In both instances the work of Perkins and Levin subverts our ability to take objects for what they first appear to be and allow us to question what they actually are.

Oliver Perkins’ playful ‘Implant Paintings’ are formed through a defined system that repeats the subtleties inherent to their construction. Perkins defines these works as physical models that explicitly, and self-reflectively, reveal process and document the mechanics of production itself. Using one of the foundations of painting, the stretcher, and the process of stretching a canvas as a formal gestural device, the artist stacks multiple stretcher-frames atop one another and then pulls the canvas taut over both, creating a drum-like object, which he refers to as an implant. The larger, base frame rests against the wall as a raw-canvas, full-bleed object, that is to say rendered with no borders or edges, the gessoed implant section protrudes forward, presenting the hand-drawn image. Bold lines that share the fluidity of a graffiti tag and the rigidity of a sign dissect the white surface. Reductively positioned, the slight variances in line, composition, and the topography of the relief element become the central points of focus for contemplation. The paintings reveal a push/pull of information and material, simultaneously highlighting and isolating the foregrounded picture plane, yet somehow denying access to a totalised, representational space, instead providing the possibility for thought where relational and formal criteria seem to equally apply.

Dean Levin’s installation similarly unfolds as a practice based on remixed materials. Positioned linearly above a reflective trough-shaped pool, the painting pairs appear as seamless flat surfaces, groupings of touching square works. Upon careful examination, and aided by the series title Convex Diptychs, the outwardly curved shape of the paintings is revealed. The curve comes from a methodical process whereby Levin clamps the almost square 20 x 22 inch stretched canvas / lycra mix fabric and then pours fiberglass reinforced plaster onto the backside. The curve itself is formed by gravity’s natural pull, through an organic process exterior to that of a gesture perfected by the artist’s hand. Referred to as a minimal surface; a term used in mathematics denoting a surface without constraints, the works sits on the fringe of our perceptibility. Just as the reflection in the pool surface waivers and shifts based on vantage point, the paintings teeter between our eyes’ ability to correct and rationalize a shape, and our mind’s ability to believe and understand their actual proportions. The artist’s sleight of hand is maintained by the architectural insertion of the pool itself, an obstacle denying full access to the paintings, keeping the works in an undefined zone.