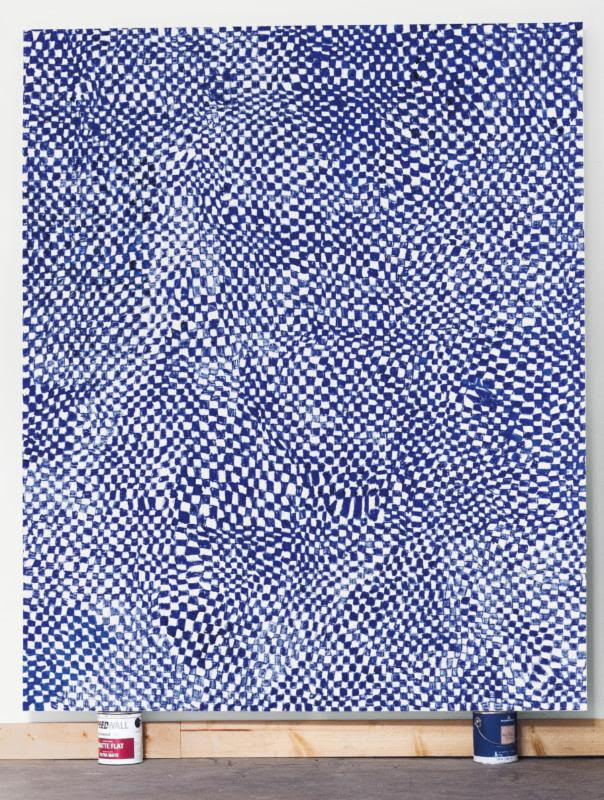 Gagosian New York is to present “Shooters,” an exhibition of recent paintings by Harmony Korine.

From Kids (1995), a meditation on New York City youth, to Spring Breakers (2012), a contemporary film noir in which four college freshwomen are drawn into a murderous labyrinth of events, Korine’s films of the past twenty years merge reality with fiction and shaky “footage” with precise editing, holding viewers’ attention to the split second and thereby suspending disbelief. His heady mix of the unplanned, the seductive, and the outlandish crystallizes in his lesser-known paintings. Bypassing brush and art paint in favor of squeegees, leftover household paint, and masking tape, he creates loosely sequential images that echo the sonic and visual leitmotifs of his films. In Starburst paintings, he sticks overlapping segments of masking tape to the center of an unprimed canvas, then uses a broom to spread primary red, yellow, and blue dyes over the surface. The tape is removed to reveal bright, irregular stars shining through colorful mists; the final compositions are characterized by a spontaneous, explosive radiance.

Loop Paintings are the result of a process somewhat related to filmmaking: Korine cast young men and women, made them up as elderly people, and photographed them in alleyways. He then laid down the resulting photographs on canvas in idiosyncratic progressions that recall other serial experiments, from Eadweard Muybridge’s depictions of motion, to Andy Warhol’s Disaster paintings, to folk paintings of the American South. Other works, some painted and re-painted over the course of several years, are inhabited by shadowy, clawed creatures reminiscent of Goya’s ghastly Caprices, interspersed with sprayed letters. The accumulative hypnotic effect of Korine’s paintings is offset by lifelike randomness and impulsive energy–the elements of “mistakism,” as he describes them.