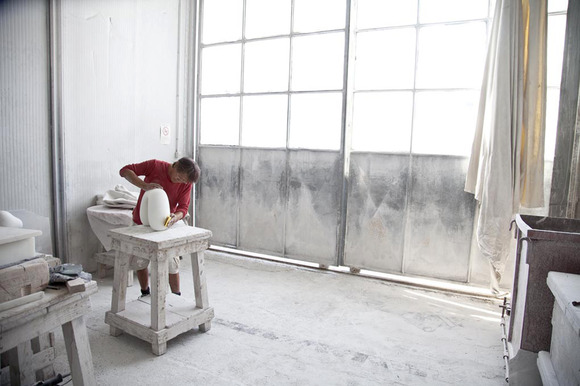 Kan Yasuda studio, Copyright Kan Yasuda, Photo Courtesy of: Eykyn Maclean
Eykyn Maclean is honored to present the first ever exhibition in the United States of internationally renowned sculptor Kan Yasuda.  The exhibition, open to the public 6 May – 27 June, will feature over twenty of the artist’s new sculptures. Gallery partner Christopher Eykyn says,

“Having followed Kan’s career in Europe and Japan, we are delighted to have the opportunity of introducing his work to an American audience. Working together with Kan, we have selected a group of works that best represent this important artist at the height of his career. I know that Kan’s sculpture will resonate as powerfully here as it does in the rest of the world.”

Born in Japan in 1945, Yasuda has divided his time between Hokkaido, Japan and Pietrasanta, Italy for over forty years, and his work deftly merges the cultural traditions of East and West. Working in an abstract vocabulary (w0rld) of smooth surfaces and sensually rounded forms with antecedents in the styles of Brancusi and Arp, Yasuda’s sculptures possess the meditative stillness and tranquility that may call to mind eastern philosophy or religion, but for Yasuda it is the ability of art to connect with mankind in general that motivates his practice.  His works range in scale from the intimate to the monumental, imbuing each with a palpable presence that lingers in the minds of viewers long after visual contact. 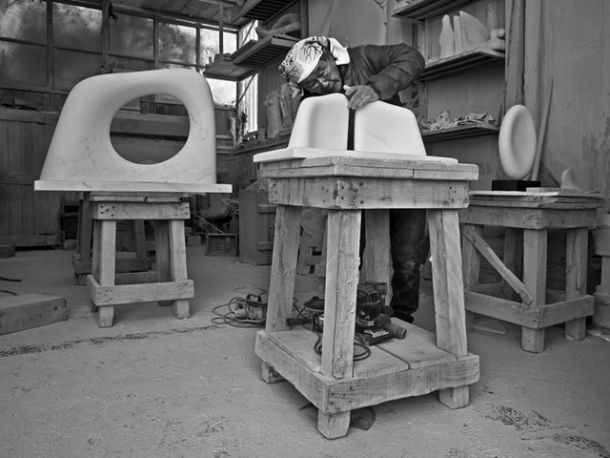 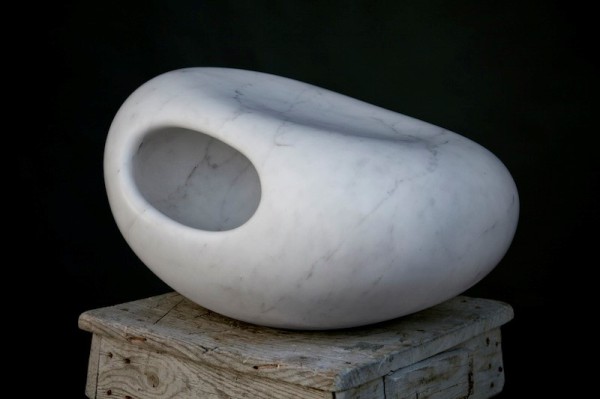 Yasuda’s painstaking technical process begins with the stones themselves, which he sources from the famous Carrara quarries near his studio in Pietrasanta.  He chooses his medium carefully, working with the pure whiteness of statuario marble, the deep lush hues of black granite, and the white marble with rich dark veins for which Carrara is famous.  His work is carved entirely by hand, as Yasuda has long believed touch to be a critical part of the process of creating his sculptures, and of viewing it, and has often welcomed viewers of his large outdoor pieces to touch their surfaces, and even to climb or lie on them. 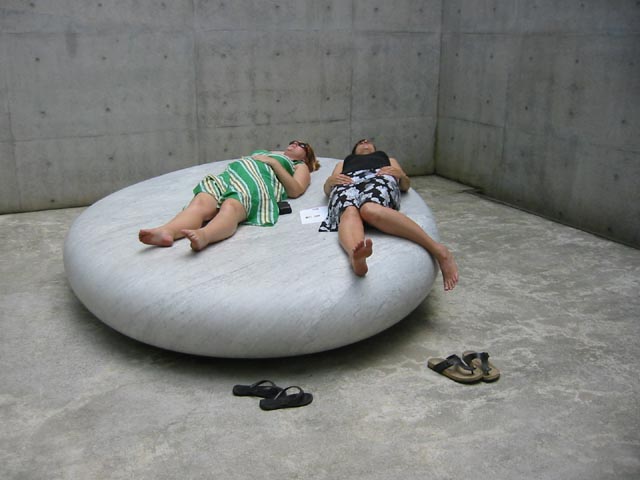 Kan Yasuda Sculpture at Benesse House in Naoshima, Japan
In 1992, together with the city of Bibai in Hokkaido (Yasuda’s hometown), Yasuda created Arte Piazza Bibai, a sculpture park that spans seventeen acres and includes forty of the artist’s works. Free to visit and open to the public year-round, the park has revitalized the city, and in 2002 earned the Togo Murano Award of Japan for best architectural project.  In 1994, Yorkshire Sculpture Park presented a solo exhibition featuring eighteen of Yasuda’s large-scale works. Peter Murray, founder and executive director at Yorkshire, writes of Yasuda’s work as “sculpture for all seasons,” noting that while marble can at first appear intensely white and stark,

“under the sensitive but determined hand of Kan Yasuda it assumes a responsive aura adapting to the lush green of late spring, the buttercup yellow of an English summer, the rust of autumn or the icy white of winter.” 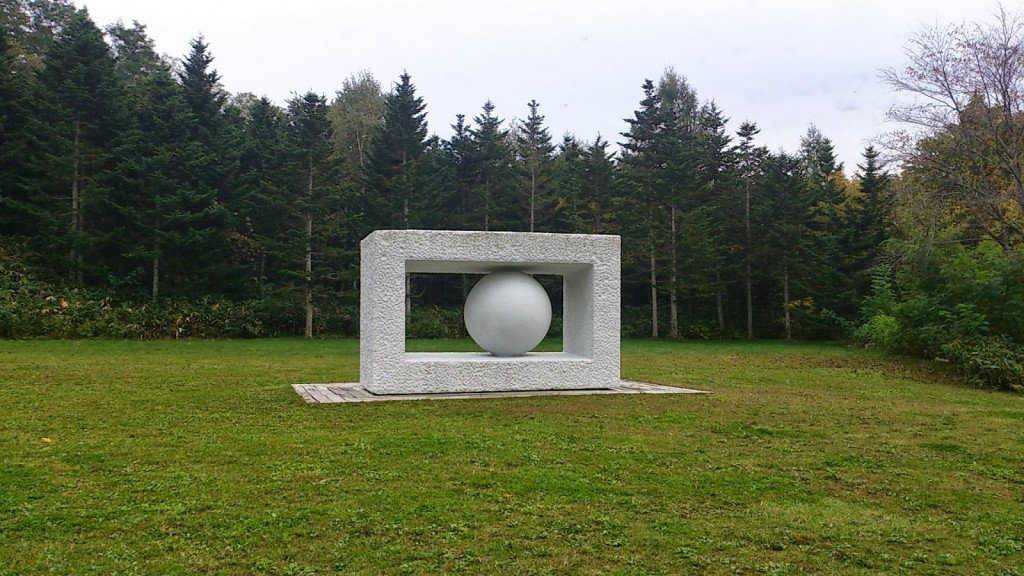 Other exhibitions include those organized by the cities of Florence, Milan, Pietrasanta, Rome, and Sapporo, as well as the Fitzwilliam Museum (Cambridge), and Tokyo’s Metropolitan Teien Art Museum.  In 2000, Yasuda was commissioned by celebrated architect Renzo Piano to install a sculpture in front of Piano’s Aurora Place in Sydney, and in the same year three of his sculptures were permanently installed in the Boboli Gardens in Florence—the first abstract sculptures to join this renowned 500 year-old collection. Yasuda’s works can be found in public and private collections around the globe, including the Benesse Art Site Naoshima (Japan), Bridgewater Hall (U.K), Benetton Group’s Corporate Headquarters (Italy), and Trajan Market/Imperial Forum Museum (Italy).
A fully illustrated catalogue will accompany the exhibition, with a new essay written by Peter Benson Miller, the Andrew Heiskell Arts Director at the American Academy in Rome.
About Kan Yasuda
Kan Yasuda was born in the city of Bibai on Japan’s northern island Hokkaido in 1945.  He received a master’s degree in sculpture from Tokyo National University of Fine Arts and Music in 1969.  He moved to Italy in 1970 on a fellowship from the Italian Government and studied with Professor Pericle Fazzini at the Academy of Fine Arts in Rome.  Afterwards he set up his studio at Pietrasanta in northern Italy, world-famous for the superior quality of the marble quarried there. His first solo exhibition was in 1973 in Rome, and since then he has had over two-dozen solo exhibitions and has been included in numerous group shows around the world.  Yasuda has been the recipient of several prestigious international awards including the international sculpture award Premio Pietrasanta nel Mondo (1995), the Yasushi Inoue Prize for Culture, Japan (2002), and the Italian Commander of the Order of the Star of Solidarity (2006).  He continues to live and work in both Pietrasanta and Hokkaido.
About Eykyn Maclean
Eykyn Maclean (pronounced EE-kin MA-klain) is a private art gallery with locations in New York and London, specializing in museum-calibre work by key Impressionist, Modern, Post-War and Contemporary artists. Christopher Eykyn and Nicholas Maclean established Eykyn Maclean in 2006, launching their exhibition programme in 2010 with the critically acclaimed show In Giacometti’s Studio – An Intimate Portrait, which was then followed by Matisse and the Model (2011).  The New York gallery presented Andy Warhol Flowers in November 2012, followed by Chuck Close Photo Maquettes (2013).  Eykyn Maclean opened their London gallery in Mayfair in February 2012 with Cy Twombly: Works from the Sonnabend Collection, which was subsequently followed by Interviews with Artists in June 2012. The gallery’s two most recent exhibitions Van Gogh in Paris (2013), London, and Surrealism and the rue Blomet (2013), New York, won critical acclaim.
For more information on Eykyn Maclean visit: www.eykynmaclean.com
For more information on Kan Yasuda visit: www.kan-yasuda.co.jp