Early this year The Correspondents released a track called Alarm Call. They didn’t see it as a single release but rather as a multi-media project involving a painted animation and small campaign to raise awareness for Epilepsy Society.
The launch was held at The Berloni Gallery in London and FAD caught up with Ian Bruce to ask him some questions.

1 You have described this single launch as a ‘multi media project’, firstly, do you have a preferred medium you like to work with and secondly do you acknowledge the divisions in the creative disciplines or are those divisions a construct for marketing purposes?

I love to paint and draw in equal measure and I have used both mediums to create animations for The Correspondents in the last couple of years. I called ‘Alarm Call’ a multi-media project because it involved music, painted portraits, photography and eventually an animation. I didn’t want to people to approach the film expecting an upbeat music video with a catchy ‘single’ and felt that ‘multi media project’ might throw them off the scent!

In answer to your divisions question; I think creative disciplines are mostly helpful fact – oil paint on canvas is oil paint on canvas. It gets more complicated with styles and genres where categories and labels can both open and close doors depending on how well they are applied.

2 How important is technology in your artistic practice?
Hugely important. My process is labour intensive and craft based but the converting that process into a film can’t be done without the use of Final Cur Pro and more importantly someone who knows how to use which in the case of Alarm Call my friend Andy Burns.

3 Which artists inspire you?
Quite a wide range. Hans Bellmer, Michel Gondry, Peter Blake, Sylvan Chomet, Roger Ballen. The list can go on and on!

4 How did the launch come to be at Berloni?
I know Robin who runs Berloni with his partner Maggy. They very kindly offered to host the launch of the video. I hope to work on some more painted animations and exhibit again time-permitting. 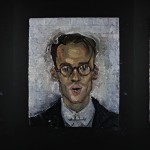 The Correspondents are releasing a track called Alarm Call on the 30th January 2014. They don’t see it as a single release but rather as a multi-media project involving a painted animation and small campaign to raise awareness for Epilepsy Society.