Rotterdam remains Europe’s largest container port, though recently overtaken in world terms by Shanghai and Singapore.
It has a distinct dynamism and, having been obliterated in the 1940’s, a modern architecture to match.

The demise of Art Amsterdam has consolidated Art Rotterdam’s position as the leading Dutch fair, and this year (February 6th-9th) it moved to a striking and spacious new location at Van Nellefabriek, a former coffee, tea and tobacco processing plant, built in 1925-31, which is something of a modernist industrial icon. That enabled various pop-up shows and the unusual video section to be brought together. The Fair was busy, but the pace was measured. According to Seventeen’s Dave Hoyland, continental collectors take their time, returning to consider work repeatedly before buying, and the sales action is spread out over the week. That contrasts with America, where almost all sale are made in the first three hours: the assumption is that anything which no one else wants immediately can’t be much of an investment. 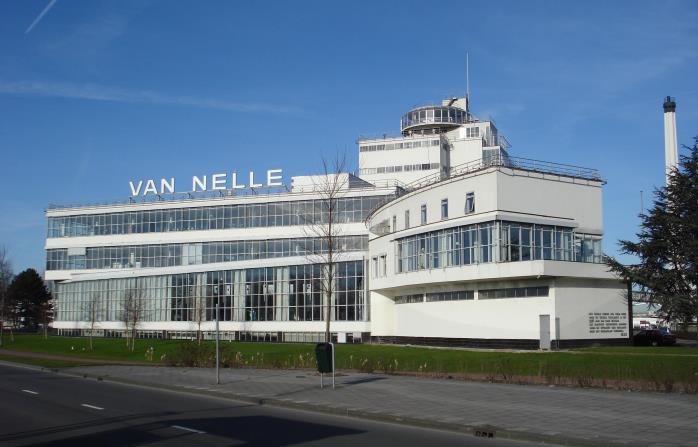 There was the usual range of eccentric projects. Mobile inflatable sculptures; a five day concert made by ‘playing’ the factory’s fuse box and adding street sounds; a booth turned into a bar, where I was buttonholed by a comedic woman (she asked if I wanted a double entendre, and I agreed she could give me one) who turned out to be an art action. All the leading Dutch galleries attended, yet the British, along with Germans and Belgians, were also very much visible. There were eight of our galleries among the 118 attending, and plenty of British artists popped up elsewhere: Jonathan Callan, Charles Avery, Shezad Dawood, Kate MccGwire and Julie Cockburn were among those making a good impression. The weather also felt British: just as wet as back home just now, and with enough wind swirling around the buildings that Maria Stenfors complained that there was nowhere calm enough to smoke… 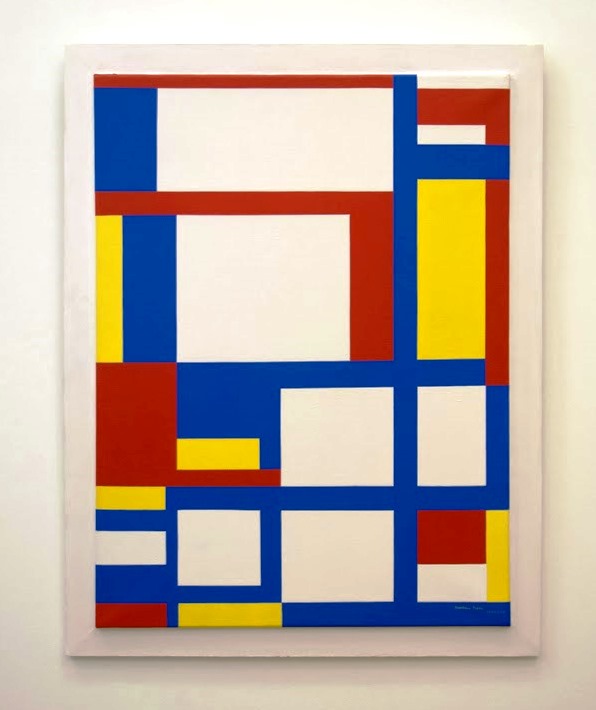 I called in on Amsterdam en route. Unusually, no British artists have shows there at the moment, but I was struck by this painting. Marjorie Moss (1898-1958) tends to be as renowned for changing her name to Marlow and dressing as a man from 1926 as she is for the paintings in which her Dutch connections are evident (she was in Mondrian’s Paris circle and her lifelong partner was the Dutch writer Antoinette Hendrika Nijhoff-Wind). Her star is in the ascendant just now, with a Tate touring solo show (in Hastings to 23 April). The dynamic way in which white earns its colours in this late work certainly does that no harm. Let’s start Art Rotterdam with other British work which bears the trace of Mondrian… 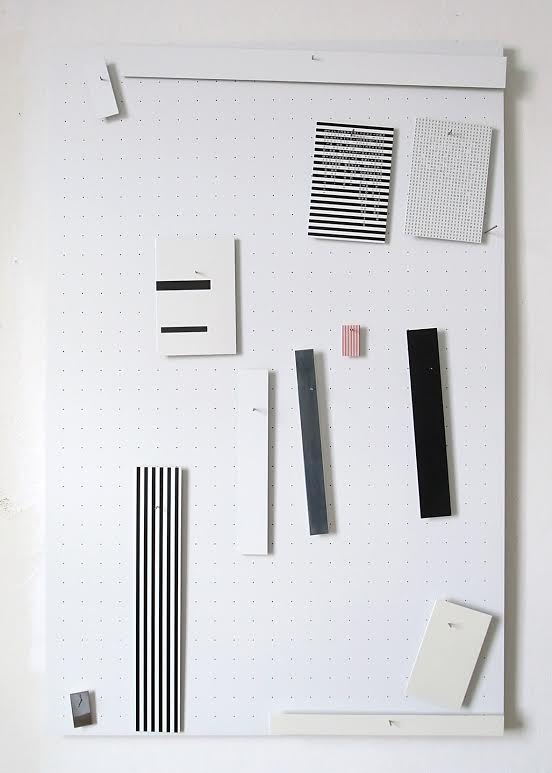 Hidde van Seggelen, who’s Dutch but runs a gallery in London, is well-placed to assess the nations’ differing taste. He says their collectors have much in common, though the Dutch do particularly admire precision in the making. Tom Benson’s Imaging should have appealed, then, as a gleamingly high-end aluminium production, albeit with provisionality built in: it would be easy – though Benson would not approve – to switch around the various elements attached to the exhaustively hand-engineered pegboard background. Those sculpturally shadowed shapes hang from steel pins, their angle determined by how gravity acts given the placement of the hole in them. Worlds are anthologised in the elegant dance of shadowed elements which results: exhibition invitation cards, a sharp accent of red, reflections of the space and rogue incursion of sprayed glitter paint. 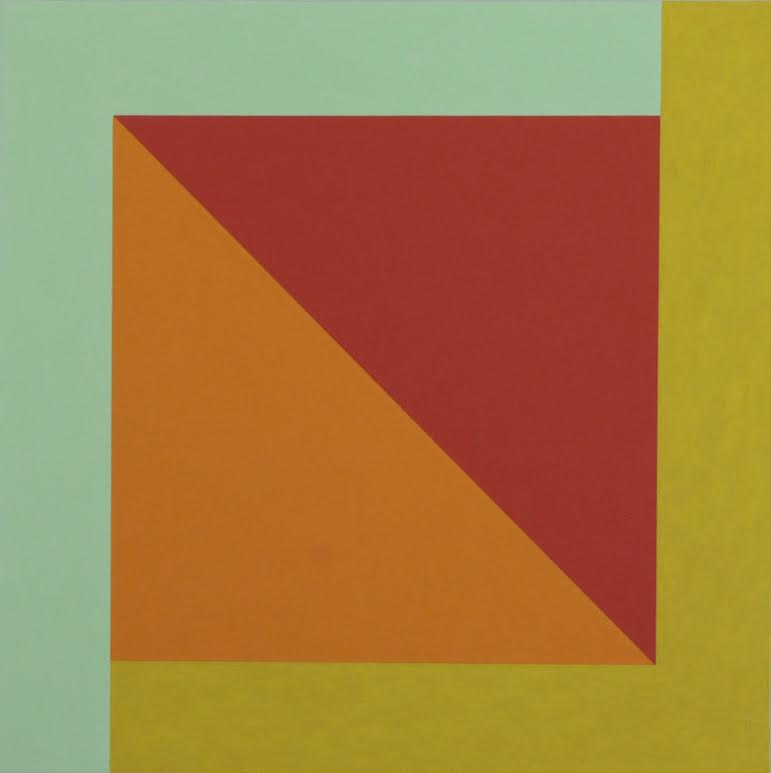 David Saunders was a co-founder, in 1969, of the Systems Group, which aimed to build up to abstraction through logical processes. He’s had a low profile recently: this teaser for a forthcoming solo show in London included black and white canvasses not shown since the 1970’s. Saunders moved into colour in the mid 80’s, and this radiantly rigorous painting is one from a series which uses equal areas of each primary – but with the different shapes creating some doubt that it’s so. Saunders also adjusts his colours from the pure forms you see in Moss, aiming at equal density of impact. He believes that requires that the yellow, to be successfully saturated without turning green, must be light in tone, and the red and green mid-tone else they tend to blue, whereas blue can maintain saturation across a wide range of tonalities. 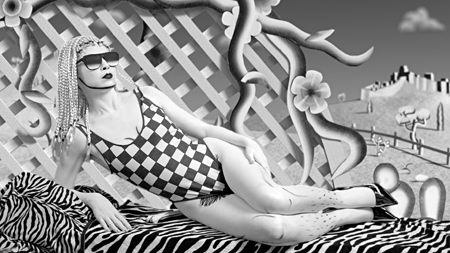 South Carolinan Mary Reid Kelley certainly puts the work in. She writes energetic rhyming pastiches of mythical classics, rich in risqué wordplay. They become the scripts for films in which she takes all the main parts as characters made up in black and white against greenscreened backgrounds to very distinctive visual effect. Top marks for style, then. What about content? I have to say that no clear intent emerged from this 20 minute mash-up of American High School, basketball and beach culture with the tale of the bull and the Minotaur – but I did enjoy it. Perhaps if I’d watched it twice, but there were three sets of headphones and a queue. . 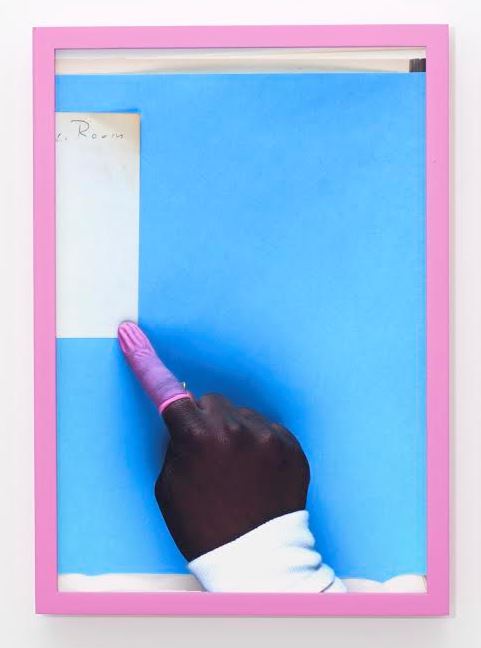 The framing of American artist Andrew Norman Wilson’s series ScanOps takes its title from Google’s book scanning operation, is a found collection of anomalous shots which literally reveal the labour behind technological business as workers’ hands are accidentally captured. Moreover, if Google is a factory, says Wilson, it includes not just the anonymous workers and co-founders Sergey Brin and Larry Page, but ‘the pink finger condoms, infrared cameras, the auto-correction software, the ink on my rag paper prints, me, the capital required to fund the project’ – and us, as we’re all ‘performing freestyle data entry’ towards Google gathering its income from the exchange of information and knowledge. The framing echoes the parallel way in which Elad Lassry presents photographs to emphasise their materiality. 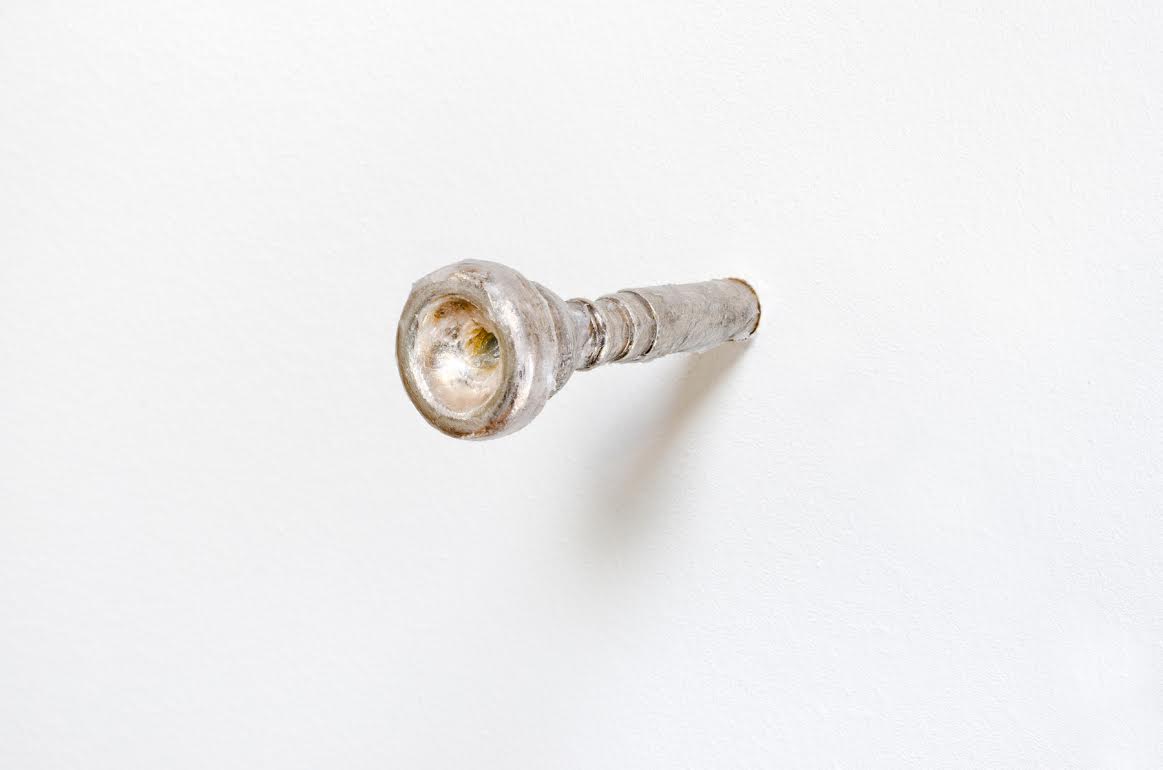 One of the most striking stands in the New Art section of solo presentations was by German-born (1970) but London-based Philip Newcombe: ten richly playful yet barely-there works ranged like occasional notes across the stand’s white score. They ran from a trumpet mouthpiece, attached as if to suggest the full instrument behind the wall, painted with Vaseline and hung hip-height to accentuate the sex in the title, Blow; a gobstopper-as-planet which had been sucked whilst ‘thinking about heavy shit’; and a ‘No Games’ sign which appeared to have been vandalously inverted: there certainly were games here, so it was natural to read the words as ‘Game On’. 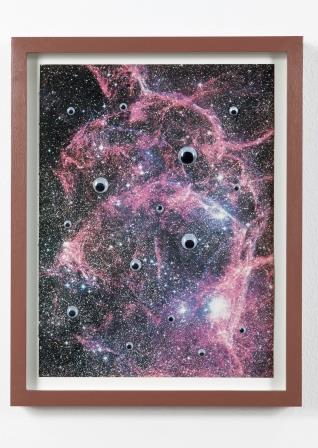 2103 was very much Andy Holden’s year, with hugely inventive multi-media extravaganzas at Kingston and Anita Zabludowicz. A collectible way to buy into his unique vision is his collages on National Geographic images, which give the night sky a multitude of googly eyes with which to stare back at we watchers of the skies while disguising themselves as stars… Where gallerist Simon Morrissey needed the eyes, though, was in the back of his head, having made the mistake of showing a fragile sculpture in the middle of his corner-spanning space, which proved to be a handy short cut through a crowded fair… 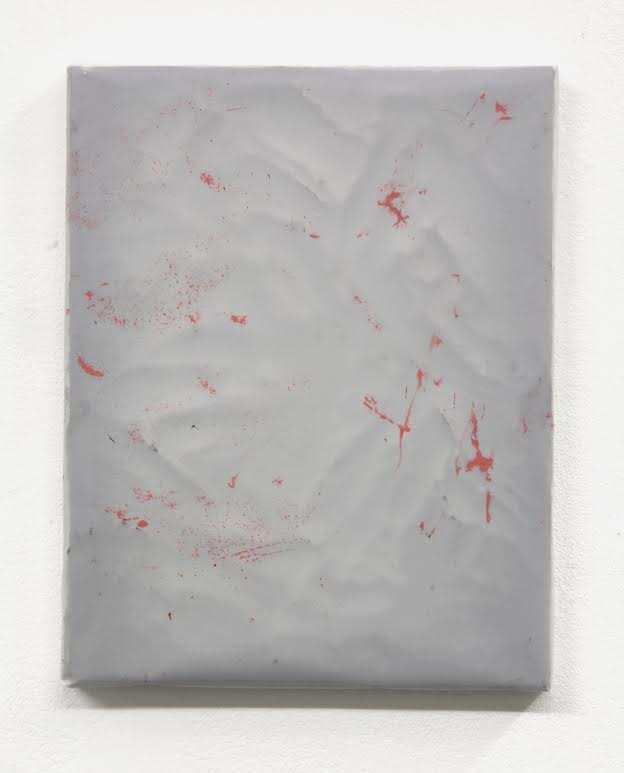 Sachin Kaeley: Plaster, acrylic, lighting gel and acetate on board at Seventeen

Recent graduate Sachin Kaeley’s small paintings – a first venture into the medium for Seventeen, and one which has generated a healthy waiting list – have been tagged ‘post-internet’ for the way their tactile surfaces, finger-sculpted into thick acrylic, are cast in plaster and spray-painted in the manner of an image being digitally tweaked. Here he introduced further levels of intervention by covering some with a semi-transparent sheet of polyester lighting gel – which itself bore subtle traces of paint. Seventeen is about to move to Dalston: all Kaeley has to do now is to up the scale or productivity sufficiently to fill the new, much larger space which his next show will initiate. 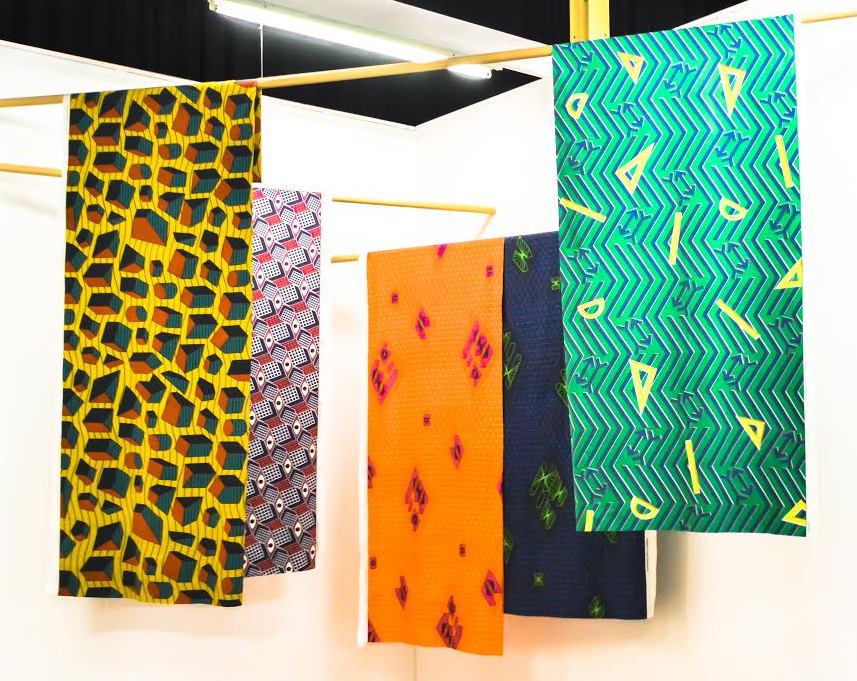 Toril Johannssen: Unlearning Optical Illusions at Tenderpixel
Tenderpixel has been operating, somewhat below the radar, for five years from a former shop space among the vintage book dealers off Charing Cross Road. The name suggests a meeting of technology and feeling, and certainly the Norwegian artist Toril Johannssen brought scientific rigour to an impressive new book ‘Unseeing’, which analyses perception studies across cultures, using that to stand in for how subjectivity enters our understanding and suggesting that what we perceive as optical illusions can be unlearned as we are conditioned to understand them with modernised eyes. Alongside that, she applied the patterns of optical illusions (such the Müller-Lyer illusion, seen above right, whereby stylised arrows may appear to be of differing lengths) to the locally appropriate medium of batik, which has a strong Dutch colonial history.