Celebrity culture inspires a morbid fascination with what somebody is going to do next, as if the whole human drama is monopolised by a notorious few. What, we ask with giddy exhilaration, is Justin Bieber going to do next? The artworld is no exception, for it manufactures gossip and speculation about celebrity artists in order to boost sales and exhibition visits. And so we find ourselves gripped once again the by spectacular antics of Jeff Koons, who has promised to make a work of art out of Sean Penn’s guns. The artwork in question, however, is a mere glint in Koons’ eye, which itself already has a market value and has sent the artworld into a speculative frenzy. 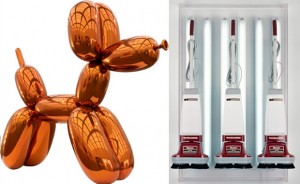 It began with a Hollywood love story: a blossoming romance between Sean Penn and Charlize Theron threatens to turn sour over a conscientious objection to the ownership of firearms. Penn, the devoted lover and impressionable patriot, agrees to give up his collection of 67 guns, so that Theron, haunted by the memory of her mother shooting her father, may sleep easy at night. Penn then decided to sell the guns at auction for his J/P Haitian Relief Organization, but this alone provides no more spectacle than a gushing display of altruism towards both his girlfriend and a beleaguered country. Enter Jeff Koons, who agrees for the now scrap metal to be sold in his name.

But what was for sale that night in LA was neither a collection of guns with one previous celebrity owner nor a work of art by a mega-artist. Instead, this particular lot was nothing more than an idea; perhaps not even that, but only the promise of an idea that would come to fruition at the stoke of Jeff Koons’ Midas hands. Understandably, everyone wanted a slice of the action, with a certain Piers Morgan bidding $1.3 million, eventually losing out to CNN anchor Anderson Cooper, who shelled out $1.4 million for the physical impossibility of an  idea in the mind of Jeff Koons.

If you shut out the noise from the fact that this all occurred in the name of love and charity, a brilliant artworld curiosity emerges. At $1.4 million Cooper has got himself a cheap slice of the intensely rich Jeff Koons pie, especially considering that an existing Koons can set you back $54 million. The purchasing of ideas for sums of money beyond most people’s reach goes a long way towards strengthening the brand: not only does it confirm the collector’s seemingly unshakable faith in the reliability of products from Jeff Koons Inc, it also boosts market confidence in the brand because it confirms that the artist’s name is enough to sell the product.

The real curiosity here is not faith in the Koons brand, for we could see the same phenomenon occur with Hirst, Schnabel or Richter, but it is in the fact that there is a supposed link between market value and the possibility of a good work of art. While this is a cheap Koons, the sum of money paid, plus the kudos of the romantic story and its charitable ending, is sufficient for Cooper to expect delivery of a work of some exceptional quality. It is not known what Koons will do with the guns, but artworld speculators are divided between thinking he will melt them down to make one of his cast steel works or that he will place them in a Perspex box – the former in the manner of his latest work and the latter in the manner of his earlier work.

Either way, this promised work of art already has a noble chunk of art historical interest attached to it, which can later increase its value on the open market. Anderson then becomes a player in a network of strangely interlaced games: collecting contemporary art, helping a charity, acting as Hollywood relationship councillor and investing in his pension fund. From an art market point of view, the fact that all these games can be played simultaneously only adds value to the work; it invests in the art market’s conspiracy to create value (in the cultural and economic sense) out of ethereal numbers and unrealised ideas.

But the chances are that, after this rush of excitement, once the artwork is realised in some impossibly pristine form, speckled with Koons glitter and glistening with spectacular myths, all it’s eggs will be placed in the money basket, leaving the lofty culture basket disarmingly empty. Giddy market speculation and gossip do not always ensure artistic merit, even if the history books will tell it differently, for even Midas occasionally drops his basket of eggs on the way to the market.