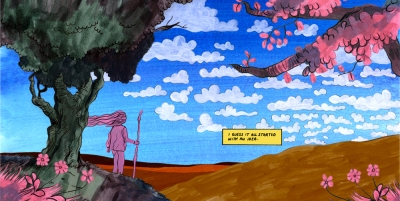 Helix Tree, courtesy of the artist and Lighthouse

DNA’S HISTORY UNRAVELS, TOLD BY A 500-YEAR-OLD MAN, FROM ACROSS THE MILLENNIA
It has been 60 years since Crick, Watson, Franklin and Wilkins discovered the helical structure of DNA. To coincide with this, Lighthouse has commissioned Helix, which tells the story of DNA’s discovery from a different perspective.

Helix is a collaborative digital graphic novel created by artist David Blandy, scientist and writer Adam Rutherford and illustrator Daniel Locke. Helix tells the history of DNA from the perspective of a 500-year-old man kept alive by genetic therapy. The story spans a 40,000 year period, from ancient chimera, to modern day spider goats, to a speculated future of centuries old human beings.

At GV Art, the exhibition shows Helix on touch screen devices, displaying the digital flexibility of the format, plus original drawings and sketches created by Locke. The digital graphic novel was made possible by Storythings, a creative agency working with new ways of storytelling, who created the web version of Helix from the collaborators’ original texts and drawings. Helix launches with this exhibition at GV Art as part of London Science Festival 2013.

Development
Helix began with a residency at Lighthouse as part of Brighton Science Festival. The aim was to explore and imagine how the story of the discovery of DNA could be told using David and Daniel’s visual language, and Adam’s scientific knowledge. Over the period of the residency, the collaborators talked, sketched, delved into science history, speculated about the future, and shared ideas. They also met with Lighthouse’s creative technologist, Natalia Buckley to brainstorm the possibilities of how the narrative could work online.

About the Team
David Blandy is highly regarded contemporary artist, based in Brighton, who uses video, performance and comics to address identity formation and its relationship to popular culture. His work deals with his problematic relationship with popular culture, highlighting the slippage and tension between fantasy and reality. David has exhibited widely, including shows at The Baltic, Gateshead; the Liverpool Biennial; Turner Contemporary, Margate; Spike Island, Bristol; and Platform China Project Space, Beijing.

In 2012, Lighthouse curated a major retrospective of David’s work, entitled, Odysseys curated by Lighthouse.
His work is distributed by LUX, and he is represented by Seventeen Gallery in London.

Dr Adam Rutherford is a geneticist, broadcaster and author, who is currently working for Nature. He is considered one of the UK’s outstanding science communicators. Trained in genetics at University College London, his work includes the award-winning BBC programmes, The Cell, The Gene Code, and Playing God. His first book, Creation, about synthetic biology and the origin of life, was published by Viking in April 2013.

Daniel Locke is a Brighton based artist and illustrator. His work has been shown in numerous shows around the world including the And’Art festival in Morocco and the Islington Exhibits festival in London. In 2008, Daniel worked with David Blandy on a graphic novella commission for the Tatton Park Biennial 2008. In January, his work was shown as part of the Open Day Book group show at LACE in Los Angeles, and has been featured in The Stool Pigeon music newspaper in London and A Graphic Cosmogony from Nobrow press. He is currently working on his first full-length graphic novel.

Storythings was established by Matt Locke in April 2011. It is a company established to experiment with new ways of telling stories, through consultancy and production of projects with new and established talent; through events and annual conferences looking at storytelling in a wide range of contexts and media; and through a series of objects and publications produced with some of the most innovative storytellers around. 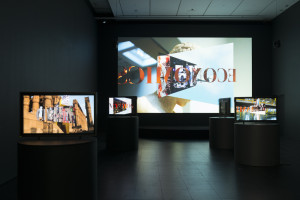 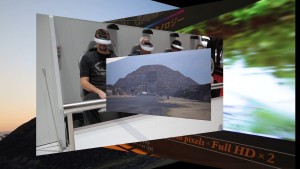 This is not a display of individual works, however; but a completely realised concept, beautifully occupying the gallery space. Rarely has this kind of exhibition been so carefully thought through and presented with such verve.

Panel discussion: Between & Across Disciplines: Art & Science in Higher Education