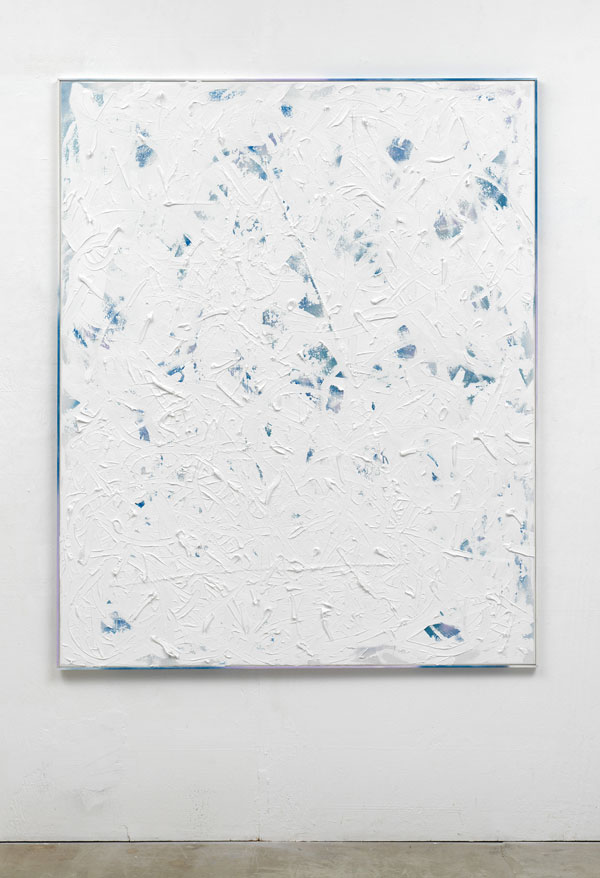 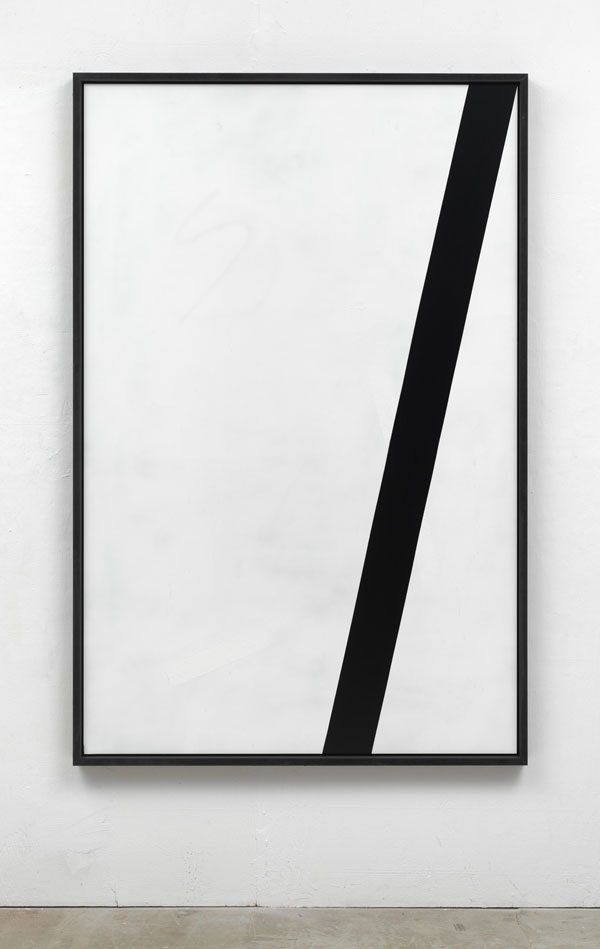 True to its title, Total Recall serves as a kind of comprehensive recap, offering selections from Chris Succo’s three most recent bodies of work. Succo is a restless artist, given to working in several modes at once, and indeed, upon entering the gallery space, one is immediately struck by the sheer range of the artist’s activities: with media ranging from lacquered aluminum and oil on canvas to analog photo prints and powder-coated steel sculptures, the apparent disparities between Succo’s various projects are pronounced enough that the uninformed viewer could easily mistake Total Recall for a group show.

Restlessness, however, is not the same as randomness, and even in demonstrating the diversity of Succo’s output, Total Recall offers us considerable insight into the underlying concerns and tendencies that drive his practice. Though subtle, these threads of continuity both clarify and temper the visible differences between the works; like a book unfolding in chapters, one finds that each represented series stands on its own while informing and reflecting the others, lending context to what might otherwise seem unconnected.

In Succo’s latest series, informally referred to as his “White Paintings,” the very act of negation is embraced as a constructive pictorial agent. He begins by randomly spraying coats of lacquer onto canvas. Once dry, Succo obscures this layer beneath thick, gestural washes of white oil paint, trading off between a spatula, tubes of paint, and various brushes to ensure a variety of surface treatments. Crucially, Succo’s application throughout is vigorous but inconsistent, allowing portions of the underpainting to show through in a characteristic display of interactive layering. It is, at first, a highly improvisatory process, with smears and strokes emerging with little discrimination on the part of the artist. As each work progresses, however, Succo slowly allows these unintended visual incidents to take on an active compositional role, guiding his decisions as he gradually carves loose but deliberate formal arrangements out of the cacophony. In reading the resulting canvases, one finds evidence of both decision and discovery, the process of concealment having yielded revelatory outcomes. As such, the White Paintings reaffirm an important theme within Succo’s broader practice: namely, that behind even the most seemingly random results can lie purpose and coherence, an underlying logic which gains clarity through thoughtful observation and an understanding of the generative process.

Succo’s “Nu Era” series, meanwhile, finds the artist applying layers of lacquer onto aluminum panels, resulting in minimal achromatic compositions which, in what has become something of a personal signature, he then mounts in black MDF artist’s frames. With their balancing of space and simplicity of form, the works immediately call to mind the reductive strategies of Minimalist and Hard Edge painting, but close inspection reveals a crucial difference in Succo’s approach: for what reads from afar as a pristine, uniform surface is in fact quite irregular, with pieces of aluminum tape lending accent to compositions already activated by visible brushstrokes and varying shades of undercoat. In retaining this pictorial variety and affirming the artist’s hand, Succo prevents us from reading the paintings as single unified designs, allowing instead for a clear sense of narrative to emerge from his characteristic use of layering, with each painting visually conveying the particular process of its own creation.

Where the “Nu Era” work benefits from its retention of narrative, however, Succo’s photographic output instead finds meaning in its denial. Shot on film and printed by hand, Succo’s images are high contrast, with deep blacks and intense whites that lend to the work a noirish tone. His chosen subjects are generally quite banal – in this case, a glass of beer sitting atop a bar counter, the camera’s flash illuminating the low lit room enough to register the drinks and cigarette pack set nearby. Like all of his photos, the image is purposefully neutral, offering little in the way of storyline so as to encourage a less subjective, more purely formal reading. This effect is augmented by the scale of Succo’s prints: once enlarged many times over, one finds the glass taking on a monumental, almost sculptural quality, while the odd peripheral detail becomes almost indecipherable, providing the textural variety one so often finds in Succo’s work. In this particular case, we find the smeared fingerprints on the glass mirroring the brushstrokes and exposed undercoats of his paintings, while the angle of the straw echoes both the diagonal composition of the “Nu Era” work and the vertical definition of the powder-coated steel pole installed in the corner of the gallery space.

As with so much of his output, the effect of Succo’s photographs hovers somewhere between abstraction and representation, discouraging symbolic readings so as to reaffirm, as Frank Stella once insisted, that “only that which can be seen there is really there.” Of course, that he would choose to convey this idea through photography, a medium which lends itself so readily to implied narratives and projected meanings, seems somewhat counterintuitive – but then again, that’s precisely the point: Succo’s work consistently speaks to the benefits of suspending ones habits of thought and sight so that he might encounter things, perhaps for the first time, on formal rather than associative terms. To that end, integrating photography into his practice makes a great deal of sense, for despite our inclination to find narrative in pictures, photography has always been a medium of exclusion rather than storytelling; it removes its subjects from context and lays them bare as they truly, plainly appear. In presenting these images, then, Succo challenges his audience to adopt an objective mode of viewing – that is, to allow themselves to read a given picture without having to read into it. His paintings may speak to the capacity of form to serve as content, but in considering Succo’s photographic offerings, it becomes clear that the artist finds equal merit in the reading of content as pure form.

In the end, Succo’s practice is perhaps best understood as a negotiation between action and reaction: from his material processes to his chosen modes of presentation, one finds the artist repeatedly looking to observed circumstance as a point of departure, translating his tools’ natural tendencies into a subtle but sound conceptual framework. In highlighting both the diversity and the continuity of his output, Total Recall serves to reinforce this idea, amply demonstrating the possibility of combining disparate languages into a single coherent statement.