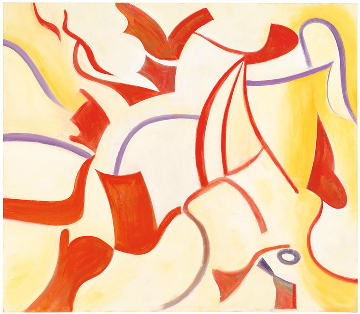 Gagosian Gallery is to present an exhibition of ten paintings by Willem de Kooning, created between 1983 and 1985. The exhibition highlights the critical three-year period in the last decade of de Kooning’s long career, during which he radically transformed his style. Organized in close collaboration with The Willem de Kooning Foundation, it is curated by John Elderfield, Chief Curator Emeritus of Painting and Sculpture at The Museum of Modern Art, New York, and a consultant at Gagosian Gallery. Mr. Elderfield was the curator of the widely acclaimed, full-scale retrospective of de Kooning’s work held at MoMA in 2011-12.

According to John L. Eastman, a member of the board of The Willem de Kooning Foundation,

“We are thrilled to be able to share a selection of de Kooning’s most interesting and rarely seen works with the public, while using the proceeds from their sale to support the Foundation’s ongoing research, exhibition, and educational initiatives.”

“This will be the first exhibition drawn entirely from the holdings of the Foundation, and we’re particularly excited about continuing our collaboration with John Elderfield, who did such a wonderful job on the recent de Kooning retrospective at MoMA.”

The paintings that de Kooning made from 1980 onwards are commonly said to characterize his “late style.” In fact, it was not until 1983 that a far greater change occurred in his practice. It was only then that he condensed the rich and tactile painterly qualities of his earlier work into ever-narrower bands of prismatic colors set against variously toned whites, connoting at once surface and space. His characteristic marks of revision–scraping, visible underpainting, pigment feathering, glazing, and puckering–often remain, but in much more stripped-down, crisply graphic formats. New is the extent to which narrow bands and thin, mobile lines of vivid color cause the surface to seem to buckle and turn in space, while shaping an elusive figuration.

Of the works of this period, Mr. Elderfield observed: “These were very highly regarded when they were first exhibited in the 1980s, and they resonate even more today. De Kooning truly reinvented himself in these extraordinary canvases. He had the confidence to give up the lush painterliness and visibly reworked appearance of his earlier works in favor of something more reductive; but they remain not only spatially complex, but also extremely physical pictures, both visually open and densely embodied.”

This is the fifth solo exhibition of de Kooning’s work to be presented by Gagosian Gallery. Larry Gagosian said, “Since founding Gagosian Gallery in 1980, I have been committed to historical exhibitions of masterful artists. From the first time that I exhibited de Kooning’s work in 1987, I have been transfixed by his paintings and sculptures. We are honored to present de Kooning’s late paintings, which have the exuberance of his earliest canvases combined with a sophistication garnered from many years of experience. They are among the best works of his career.”

About The Artist
Willem de Kooning was born in Rotterdam, the Netherlands, in 1904. After training in the graphic and fine arts, he immigrated to the United States in 1926, where he quickly became part of the evolving modernist art movement in New York. His first solo exhibition–which included black-and-white abstractions–was held in 1948 at the Charles Egan Gallery, and was met with critical acclaim. A flurry of international exhibitions followed. In 1963, de Kooning moved from Manhattan to the East End of Long Island, New York, where he lived until his death in 1997. His work has been the subject of numerous museum retrospectives, including The Museum of Modern Art, New York (1969 and 2011-12), the Whitney Museum of American Art (1983-84), and the National Gallery of Art, Washington, DC (1994). In 1995, the San Francisco Museum of Modern Art organized the first major exhibition of paintings from the 1980s, which traveled to international venues, and to The Museum of Modern Art, New York. Recent exhibitions of the 1980s works include “Willem de Kooning: Late Paintings,” which opened at the State Hermitage Museum in St. Petersburg, Russia, in 2006, and traveled to the Carlo Bilotti Museum, Rome.