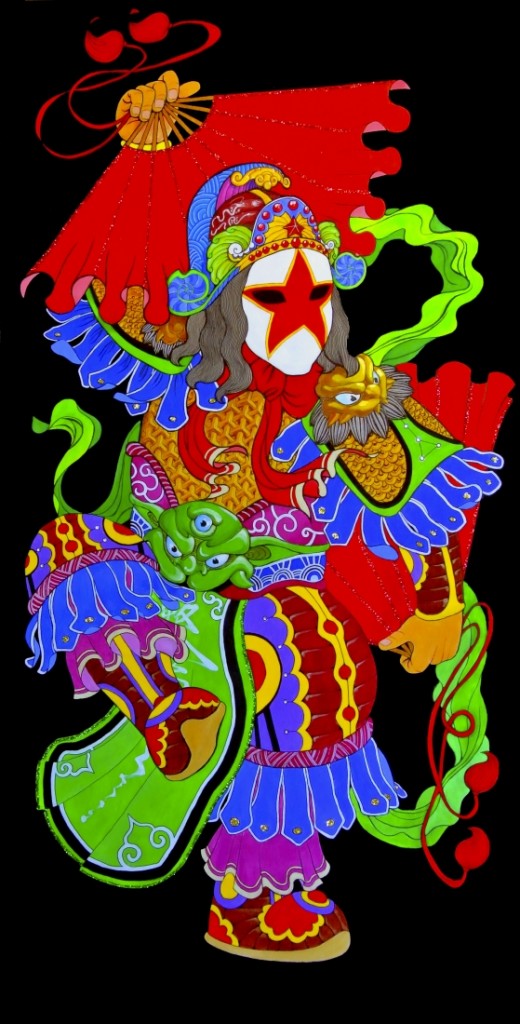 6th of September – 5th of October

To celebrate the start of the art season this autumn and in the lead up to Frieze, Kristin Hjellegjerde/ARTECO Gallery,London, presents a group show of 12 Contemporary artists and is pleased to announce the opening of ‘The Masks We Wear’. Running from 6th September to 5th October, it features works by a variety of emerging and established talents exploring the various ways in which we mask, hide, cover, represent and, ultimately, present ourselves.

The exhibition found its inception in Andrea Francolino’s quirky yet hard-hitting mixed media works combining common household items with the faces of dictators and world leaders. “Francolino’s work is fun yet politically intriguing,” says gallery founder Kristin Hjellegjerde. “I started thinking about whose work I could juxtapose it with. I asked Tom Butler what he thought, especially as his work is so different to that of Francolino’s. When he responded with ‘The Masks We Wear’, I knew immediately this would be both the title and theme of the show.” Sourcing different works, including pieces specially commissioned for the show, ‘The Masks We Wear’ covers a range of different media, from sculpture and painting to mixed media and installation, through the works of these artists, we explore the various ways in which we mask ourselves, whether through social, religious or political forces, or even for the simple act of self adornment.

Curatorially, Hjellegjerde has encouraged unrestricted interpretations of the theme in order to allow for each artist to express their views on identity, politics, history, religion, love, fashion, tradition and celebration. They examine the various factors that we, as a society, are driven by, and how these can end up becoming our own masks – both concealing and revealing. In this sense, some works, such as those of Francolino and Butler, clearly reference the title. Some invert and juxtapose cultural and religious imagery to explore the myriad ways in which we mask ourselves through our beliefs and habits. This is evident in the work of Daniel Bragin, for example, who mixes religious icons with symbols of wealth to create a commentary on the commoditisation of religion. Other works, such as a striking sculpture of a black dove with the mane of a lion carrying a heart by Daniel Wodford, present a broader approach – the bestiality of nature, inevitably breaking its masked physicality.

Meanwhile, artists such as Bongsu Park and Marco Querin use the female form as their starting point. For the former the focus is on the individual, emerging from behind and through a membrane through a process of birth and creation. For the latter, censorship and the obscured are explored through the culturally-laden burqa. “I think both nudity and the burqa are two different ways of hiding, or being hidden,” explains Hjellegjerde. “The same way in which one woman might use her body as a way to survive, putting it out on display, yet keeping her true self hidden, is as much an act of masking as for another woman to hide behind the physicality of the burqa.”

Where these women are obscured, both alluring and tantalising, elsewhere in the show, artists such as Bouke de Vries and Manuel Felisi present eerie ceramic doll heads to great effect, as frozen empty faces peer emptily into the distance. “Pottery can be seen to symbolise vulnerability, something that can be both broken easily, yet, if looked after properly, last a long time,” says Hjellegjerde. For de Vries, the mask rests as a simple black piece of fabric obscuring the perfect porcelain cheeks of a doll head. In Felisi’s work, women’s coats hang beneath mannequin heads displaying a range of hairstyles and stages of dishabille. “How we dress and how we wear our hair identifies us quickly,” explains Hjellegjerde. “This is how we put on our very own special mask each day depending on what group we feel we belong to.”

There are more traditional media on display as well as well. A delicate pencil drawing by Rachel Bullock presets a shape that is part woman, part landscape, a cascading shape that is at once Madonna and waterfall, braids of hair obscuring a face like water cascading over rocky outcrops, seemingly suspended in the dark of night, an infinite cosmos. Contrastingly, in an array of colour, Hai Huang presents a figure akin to those found in a Chinese celebration, except, where the dancer’s costume is depicted in vibrant Technicolor, adorned with strange and grotesque faces, where the dancer’s own face should be, there lies nothing but a blank mask, part of Huang’s reinterpretation of Chinese history and customs, twisting familiar iconographies to include new additions and themes.

Two artists have had work specially commissioned for ‘The Masks We Wear’ – Felisi and Lian Zhang. Working in the tradition of the Chinese school of learning that looks to the style of classical European painters such as Matisse and Chagall, Zhang “adds new lagers of history and the future to her intricate paintings, using past techniques to her contemporary advantage.” Layers can also be found in the works of Tisna Westerhof, whose mixed media patchwork works juxtapose her own safe childhood with the more insecure future of her children growing up in London, and “how a safe past can be embodied in Traditional Dutch patterns,” with various patterns and layers interplaying with each other.

Together, this group of artists present something of a cabinet of curiosities, a journey of self-discovery through which the artists “pull off layers of masks to discover truths and probe the question of – how do you mask yourself? How do others see you, and, most importantly, how do you see yourself?” asks Hjellegjerde. “Whether for fun and entertainment, driven by vanity or addiction, self-imposed or forced upon us – politically or socially – we ourselves create the masks that we wear.”