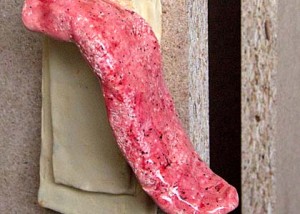 An excess of jarring sounds, images and objects. Private and public worlds collapse. Inner dialogues and everyday humdrum actions blur with the images, sounds and activities associated with offices, domestic tasks and the performance of efficiency. Banal, unpainted chipboard structures recall the furnishing of spaces for home and work: there are corner cupboards, trolleys, and variously sized tables. The assembly of these structures, resembling the DIY furnishing of contemporary life, appears incomplete. Some of them are ambiguous: a water-cooler clumsily constructed looks home-made, it is without a top, and doubles as a place to hang multi-coloured ceramic objects not quite identifiable. Inside one of the corner cupboards are lists (for shopping, household tasks, appointments).

Ceramics from jugs and cups to office and miscellaneous paraphernalia are everywhere, in opened drawers, they spill from cupboards or are attached to chipboard. Ceramic things and rolls of photographic images of flowers (the purpose of which is unclear) seem too bright and cheerful, their garishness heightened alongside the dull chipboard. Ceramic pot plants, knocked over, are oversized and clunky. Tongues or tongue-like artefacts, in varying nauseating pinks, are visceral and repulsive, they stand in for the banal stuff of everyday life. In confusing juxtapositions, they curl around oversized white ceramic napkins or they are rosette ribbons where they droop flaccid, and meat-like. At other times, they appear to be tacked onto chipboard without visible purpose or meaning. The tongues, severed from bodies, appear to live on: they suggest disconcerting, fleshy life and animation. The idea of speaking is all-present in the experience of Hart’s work (both in the tongues and in actual sound).  The meaning and legibility of sentences, words and phrases are thwarted and obscured by persistent noise and interruption. Mobile phones beep or ring. Someone keeps on coughing. After a while I feel as though I might start coughing, as if absorbing this toxic, over-loaded, anxious environment.

Computer screens are hidden, or obscured, their slick surfaces a counter-point to all the three-dimensional, ungainly hideousness. Screens are camouflaged in the actual fabric of domestic or office paraphernalia. Ceramic cups and jug are left irreverently on top of one of them, an unlikely surface. Sound emanates from the chipboard water-cooler: inside it is another discarded screen. Images flash with rapid speed: a dog in a kitchen, a picnic spread and what could be spilled milk or paint. Elsewhere moving images are reflected in a mirror, their source hidden from view. The mirror is cut like a flower, and attached to an over-sized clunky red stalk in a tipped over pot. A voice appears to search frantically through rapid sequences of images: a series of medieval gargoyles; and gums and teeth some of which are scribbled over with a florescent yellow highlighter. The teeth appear to snap together, sounds and images, connect and disconnect.

All this hyped up three-dimensional chipboard and ceramic ugliness produces sensations that are extreme: unease, irritation and repulsion. Emma Hart’s ‘Dirty Looks’ is a relentless staging of anxious excess coupled with banality. This is not a space of quiet contemplation but the territory of speculation, delirium or nightmare. Objects, spaces, sounds and images collide in an environment that offers no respite, and presents no closure. 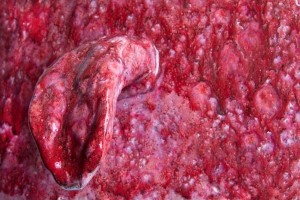