GOSEE!:BURNING SMILE on @ Red Gallery 3 Rivington Street, EC2A 3DT on Until the 17th of July 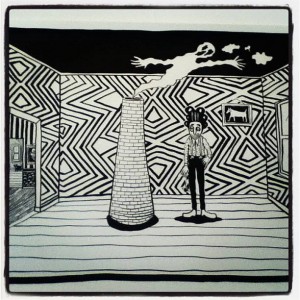 ‘I am the smoking ghost!’ is what illustrator and cool lemonade drinker Chris Bianchi recently told me when I visited him at Red Gallery this strikingly sun- filled London week. On my way to a live music show near old street last thursday night, I stumbled upon the clever works of malta born illustrator Chris Bianchi, which are now showing until the 17th of July @ RED gallery.  Aching for live poetry and jazz, and looking deeply for the venue which provided my much needed ‘drugs’on a pumped up thursday night, I couldn’t help but look over at the crowds of people bustling around this eclectic and quaint space which is the RED Gallery. 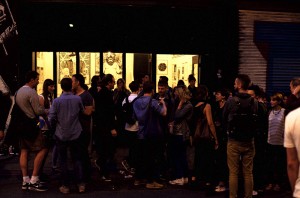 Tucked around the corner of the old street markets, I was hypnotized, amazed and puzzled by black and white stripes, perplexing zig zagged mazes, ghosts, and figures, which effectively sums up the bulk of chris bianchi’s work. So naturally, I had to take a much needed detour and stroll in to check out the scene. 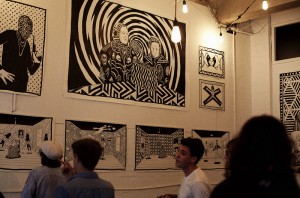 Simply curated and to the point, Bianchi really knows how to illustrate a story in the most humourous way. His work is playful, yet thorough and thoughtful, enticing captured viewers to take a second glance at both his drawn gestures and maybe even a deeper glimpse into one’s self. 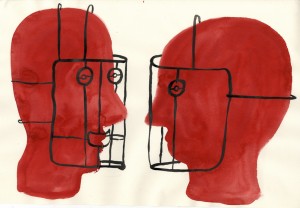 His work draws upon elements of the every day, exposing the under belly of life in black and white with an inky fever, rededicating and mangling religious and psychedelic icons and other worldly curiosities and committing them to paper. 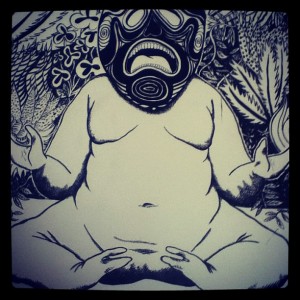 \
It turns out that BURNING SMILE is Chris’ first London solo show, hosted by the RED gallery on Rivington Street. The show is actually a work-in-progress starting a week before it opened to the public. Chris definately works intuitively, with a possessed energy, so being in the gallery space as the show takes form is the right thing to do. He has worked and collaborated with RED for the past few years, forming a bond between artist and gallery which has enabled this loose project to come to fruition. The show will also feature collaborative pieces created with guest artists. 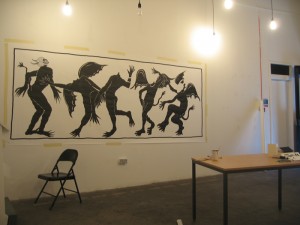 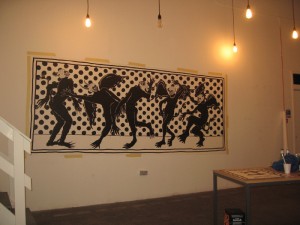 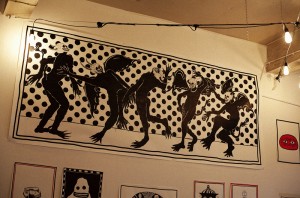 All work in BURNING SMILE is for sale, and a smaller exhibition of Chris’ earlier work including prints will be shown in the Bird and Ballard Cafe next to RED gallery. So go! And enlighten your day, and visit Chris because he will be there sipping some thrist quenching drink and listening to funky jazzy tunes waiting for colourful people to pop in from 11am -till about 7- or later if it is that kind of night. 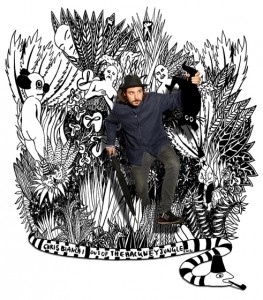 ABOUT CHRIS:
Chris Bianchi, originally of Malta circa 1977, studied illustration at the RCA and co-founded LE GUN in 2003. He also founded Bare Bones magazine in 2007.Bianchi’s work has appeared in group shows from Beijing to New York, in galleries including; Galerie Suzanne Tarasieve (Paris), Neu Gallery (London), Daniel Blau (Munich), Dazed and Confused Gallery (London), RED Gallery (London), Trolley Gallery (London) and Arrtco Collective (Beijing).
ABOUT LE GUN:Established in 2004, LE GUN is an art collective consisting of five artist illustrators and two designers who met as graduates at London’s Royal College of Arts department of communication art & design. As a team of illustrators they create idiosyncratic imagery, which blends a punk, occult, pop and surrealist aesthetic. As well as being the producers of their cult self-titled magazine, the group is internationally recognised for their enigmatic installations, performances, design projects and art shows. The particular style they developed, in which the sum is greater than the parts, is what makes LE GUN’s group aesthetic so distinctive. Their independent narrative publication provides a common ground for both emerging and established artists, illustrators, writers and poets.
For more info on LeGun:www.legun.co.uk
For more info on Chris: www.chrisbianchi.co.uk
For more info on Red Gallery: www.redgallerylondon.com
For more info on Bare Bones Magazine: quarterlybarebones.blogspot.co.uk
For more info on what to do with your crazy self on a thrusday/friday night in London: www.timeout.com
For more info on the cool live music venue I was intially venturing to: floripalondon.com
All images courtesy of the collaborative efforts of VC and the artist- Chris Bianchi