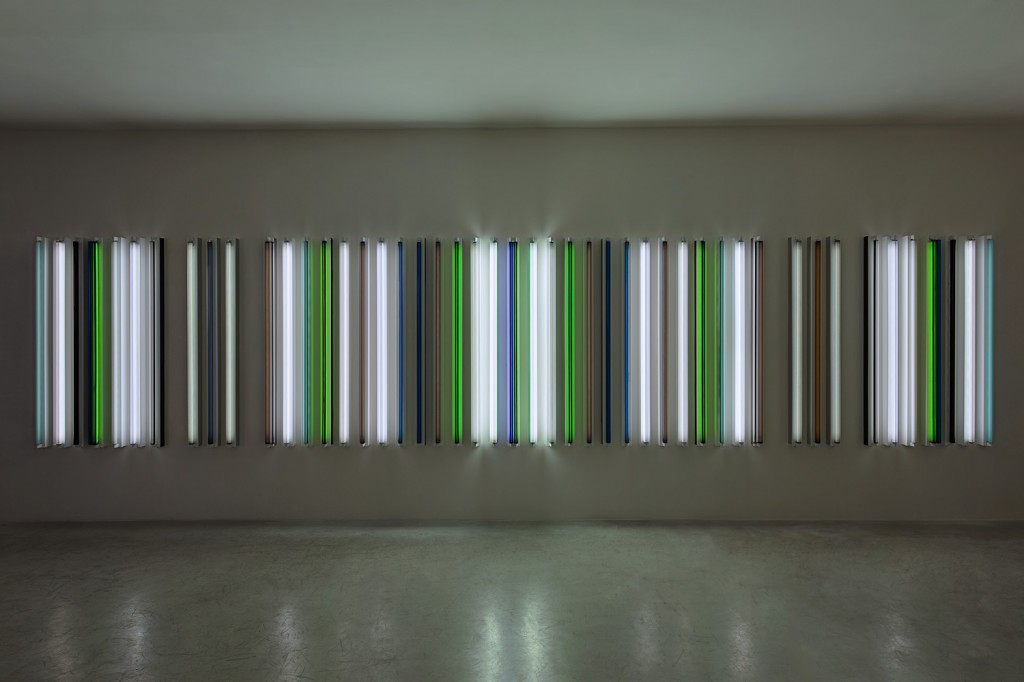 Pace London is to present an exhibition of new work by the American artist Robert Irwin.

In the early 1960s, while much of America and Europe was fascinated with the new wave of Pop Artists, Southern California quietly gave rise to a very different aesthetic revolution known as the Light and Space movement. Spearheading this movement, Robert Irwin began to take ideas from philosophical inquiries into the nature of human experience and radical advances in perceptual psychology and combine them with the immersive abstraction that had been pioneered by artists such as Jackson Pollock, Mark Rothko, and Barnett Newman. The result was an original approach to art that replaced the object with a phenomenon. Finding traditional painting and sculpture too restrictive and self- contained, Irwin was the first to make objects and installations that were purely designed to manipulate the light in front of or around the viewer.

The exhibition features two new site-specific installations displayed on the gallery’s ground and first floors. Who’s Afraid of Red, Yellow and Blue? part 2, occupies the entire space of the ground floor of the gallery and features three aluminium black and coloured panels suspended from the ceiling that mirror three identical panels hovering over the floor, suspending the viewer in a real time-space experience.

This installation is a revisitation of the ideas explored by Who’s Afraid of Red, Yellow and Blue? presented at Primaries and Secondaries, a major retrospective exhibition at the Museum of Contemporary Art, San Diego (2007–2008). expands upon a dialogue with perception that has pervaded Irwin’s practice for nearly half a century and continues references to the mid-century abstraction of the painted canvases of Josef Albers and Barnet Newman. The effort to focus these investigations from the two-dimensional canvas into our three-dimensional space is evident in this work and ultimately presents 4-dimensional space-time as the viewer enters the installation and experiences it through time.

Piccadilly, installed on the first floor of the gallery, experiments with the perceptual qualities of light, playing with rhythm, texture, densities, temperature, and chromatic relationships. The piece is made of forty-seven green and white fluorescent tubes mounted in vertical groupings on the wall and is an obvious reference to London’s illuminated road junction at Piccadilly Circus. Different to some of his other works that use fluorescent lights and feature changes of colour and rhythm, the light source of these sculptures will keep the same state for the duration of the exhibition.

As usual in Irwin’s oeuvre, the works respond to the specific circumstances and conditions of each project site that the artist takes on, transforming art into a “conditional activity” that “exists in the real world”. “Art has always been a focusing device—the frame is a focusing device. What I’m trying to do,” Irwin once explained, “is eliminate the frame, eliminate all those distractions, and put you in direct relationship to the real experience and the real power, which is your ability to perceive.”

About The Artist
Robert Irwin (b. 1928, Long Beach, California) has explored perception as the fundamental issue of art for over six decades. Irwin, who began his career as a painter in the 1950s and became the pioneer of the L.A.-based “Light and Space” movement in the 1960s, has, through a continual breaking down of the frame, come to regard the role of art as “conditional,” or something that works in and responds to the specific surrounding world of experience. Irwin has conceived fifty-five site-conditional projects since 1975, ranging from the architectural and grounds design of Dia: Beacon Center for the Arts (2003) to the lush Central Gardens for the Getty Center in Los Angeles (2005). His work has been featured in more than sixty solo exhibitions and is held in more than thirty public collections worldwide, including the Centre Georges
Pompidou, Paris; The J. Paul Getty Museum, Los Angeles; Hirshhorn Museum and Sculpture Garden, Smithsonian Institution, Washington, D.C.; Museo Nacional Centro de Arte Reina Sofia, Madrid; The Museum of Modern Art, New York; Solomon R. Guggenheim Museum, New York; and the Whitney Museum of American Art, New York.

Robert Irwin became the first artist to receive the John D. and Catherine T. MacArthur “Genius” Award in 1984. His many accolades include the Thomas Jefferson Foundation Medal in Architecture (2009), an appointment to the Advisory Policy Panel for the National Endowment for the Arts (1981), and a John Simon Guggenheim Fellowship (1976), among others. Irwin was elected as a member of the American Academy of Arts and Letters in 2007. He studied at L.A.’s Art Institutes (Otis, 1948–50; Jepson, 1951; and Chouinard, 1952–1954), and holds Honorary Doctorates from the San Francisco Art Institute (1979) and OtisParson’s Art Institute, CA (1992). Irwin has lectured in the art, architecture, philosophy, and perceptual psychology
departments of more than 150 universities and art institutes in forty-eight states and has held a number of prestigious professorships and lectureships.

Marc Glimcher, President and CEO of Pace Gallery, today announced plans to expand the business’s presence in London with a new 8,600-sq-ft location at 4 Hanover Square.