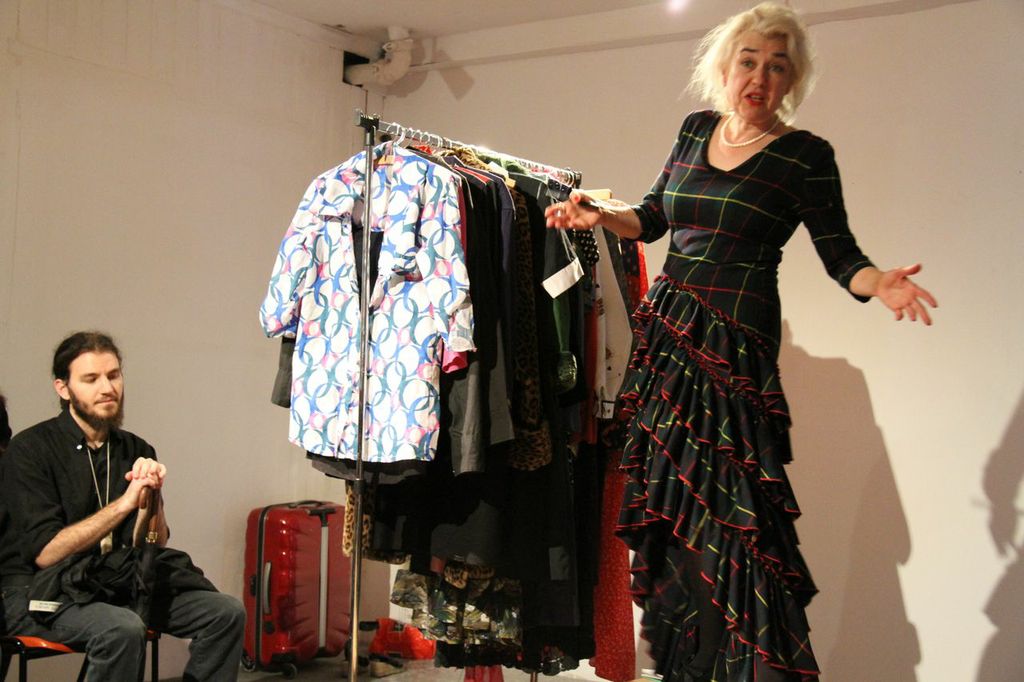 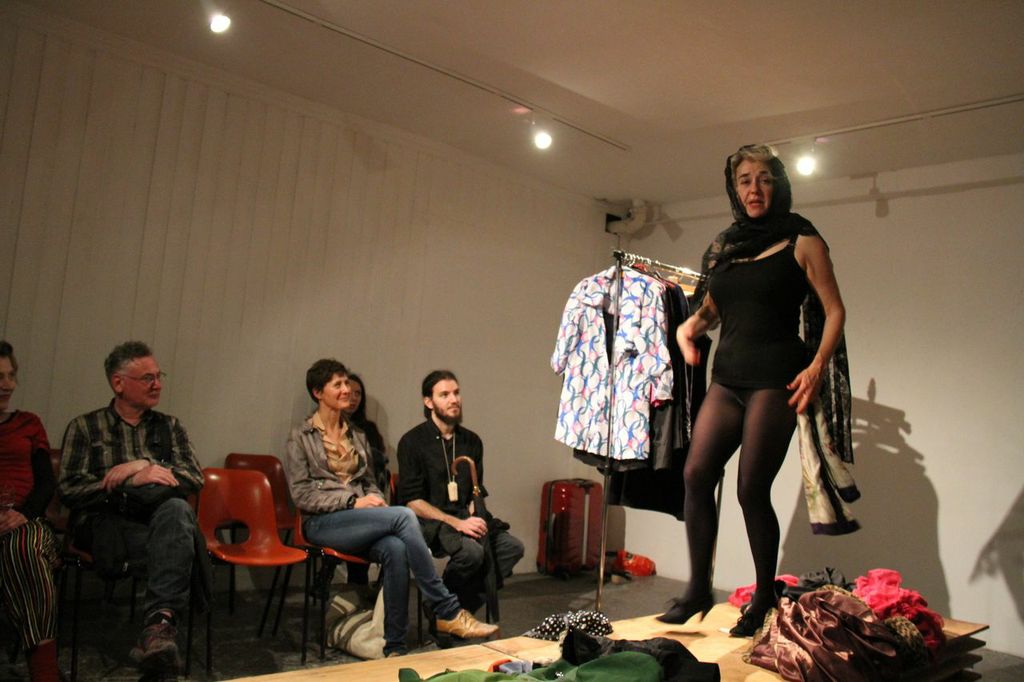 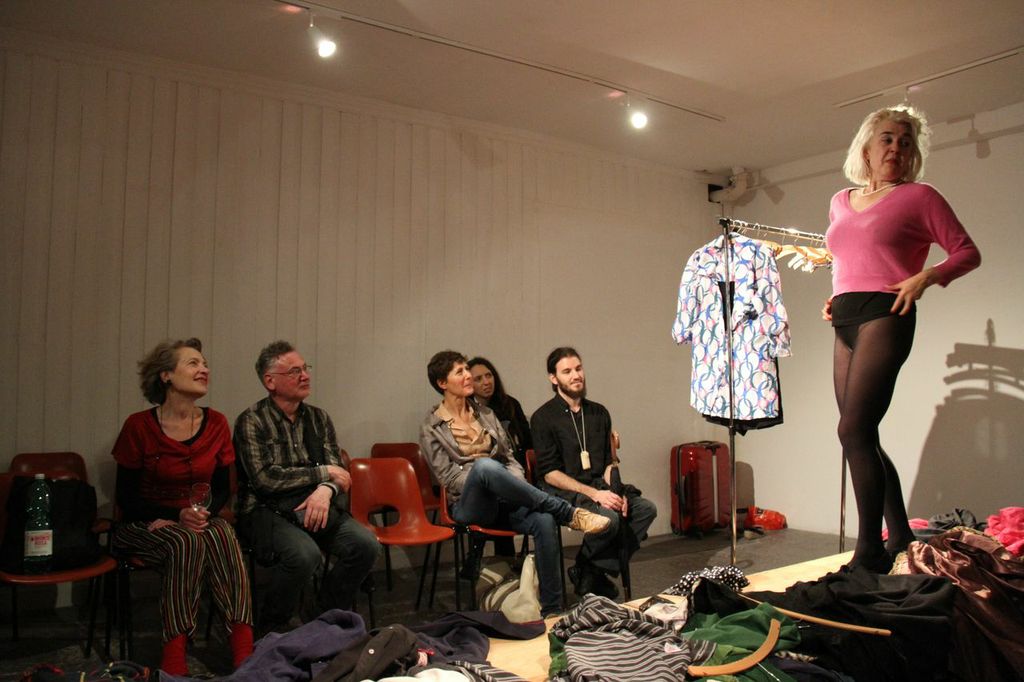 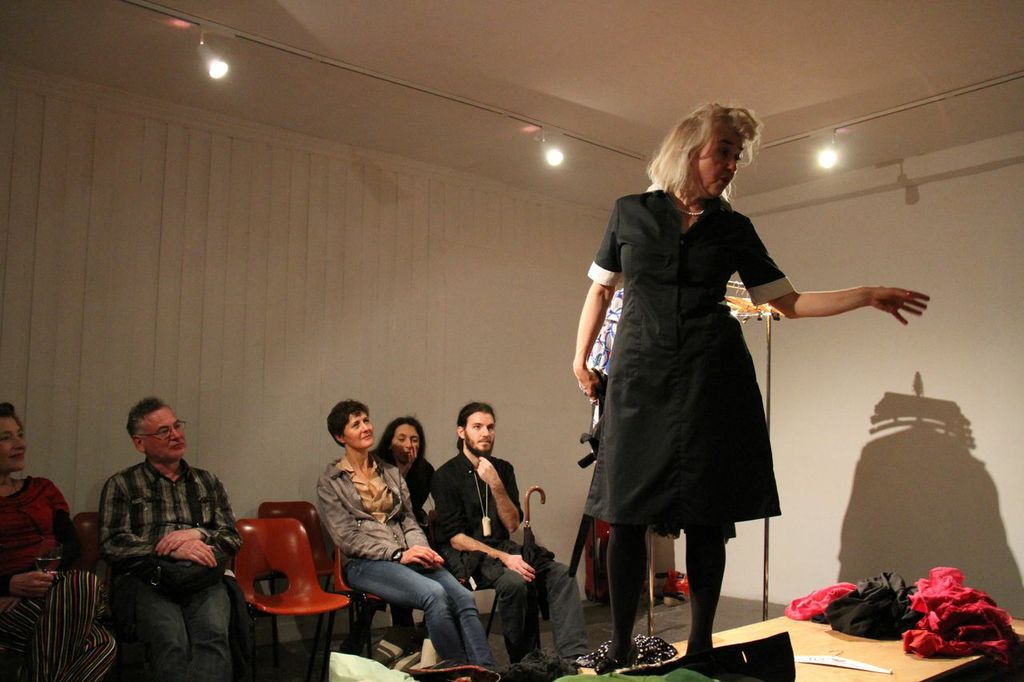 After a few moments a loquacious, informally mannered lady bustles in and takes to the stage. Probably in her mid 50s she has wild peroxide hair and during a short preamble strips down to a black vest and tights.

She tells us, with great charm and energy, that her performance is going to take probably about an hour and that if we’d prefer to leave now rather than endure such a thing then she’ll quite understand. She’s that sort of lady, brought up to make others feel at their ease whoever they may be. Beyond that her style is comedic, stand-up almost, which somehow protects us from the alarm of seeing a well spoken lady of a certain age standing on an Italian stage in her knickers. It’s not what we’re taught to expect.

For the next hour Marcia Farquhar changes into and out of a series of dresses, shirts, trousers and coats that she has worn at various points and seminal moments of her life. Whilst so doing she conducts an almost non-stop ad lib dialogue of the tales that accompany each garment. The dialogue in itself is a herculean feat of breath taking frankness and compelling theatricality. The anecdotes are alive with wit and delivered with an impressive joie de vivre. But even more affecting is the heart breaking vulnerability that bubbles just below the surface, threatening all the time and at any moment to break out from beneath its camouflage of fun, and occasionally doing so. It’s the artist’s vulnerability in its bare and universal humanness that makes this performance so powerful. What purports to be about clothes is really about nakedness; our desperation, our desires, our triumphs and our failures. Not just hers, all of ours. 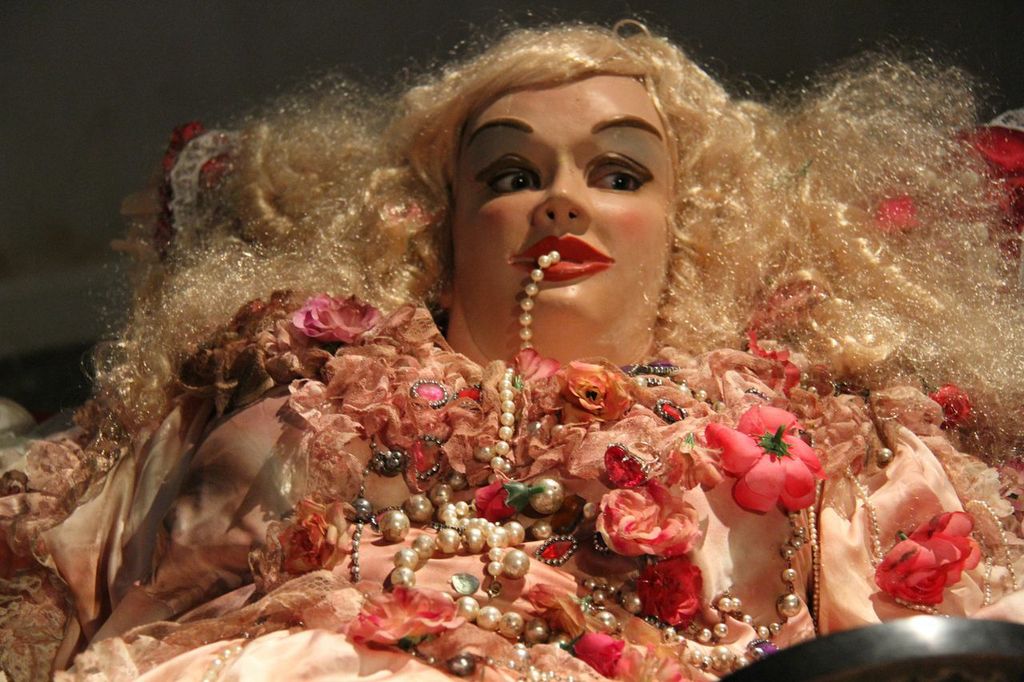 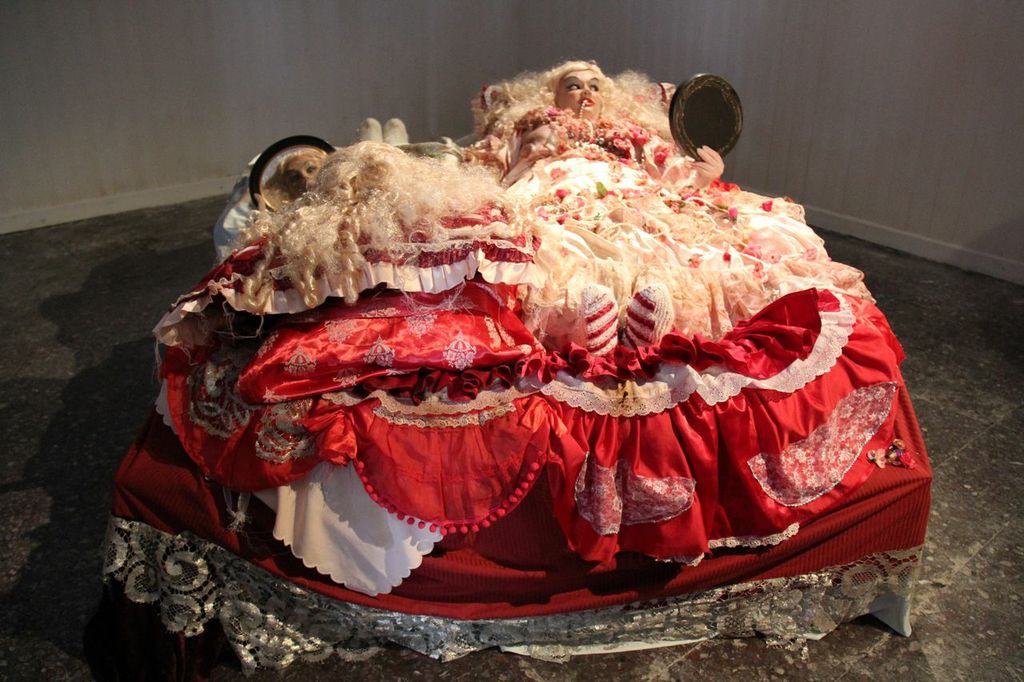 The Girls In Venice

Accompanying Marcia Farquhar’s Acts of Clothing is an equally unsettling performance by The Girls, the otherwise extraordinarily named Zerelda Sinclair and Andrea Blood. In the same small room a double bed now occupies the central space. On it the two Girls lie side by side in expansive baroque gowns, nauseating in their sickly sweetness, one covered in flowers and pearls, the other toads and snakes.

The work is a tableau vivant. The Girls do not speak or move. It is as though they have been trapped here for decades in these bodies, Havisham-esque, bed ridden and beginning slightly to smell. Their faces are obscured behind red lipped rubber masks, nothing moving except the four eyes that follow the viewer around the room as if watching her every move, envious of her mobility and freedom, whilst they themselves remain locked, gazing narcissistically at their own reflections in the little mirrors that they hold up to their own faces. Long blonde hair billows out in two monstrous clouds of yellow frizz and their feet are dressed in bizarre little knitted booties. It’s a parody of feminine beauty and a metaphor for the dangers of the double edged sword of passive objectification.

Whilst I’m in the room a group of students comes in. Buoyed on the safety of the collective, one of them approaches the static scene. She holds up a map to the two rubber faces and asks the way to Palazzo Bembo. Her friends laugh. The Girls remain motionless. It’s an excruciating moment that perfectly highlights the horror of being trapped in object-hood.

Acts of Clothing Venice by Marcia Farquhar and Diamonds and Toads by The Girls were part of Boite-en-Valise presented at Palazzo Zenobio by Arts Pavilion Bournemouth during the preview week of the 55th International Art Exhibition, la Biennale di Venezia. It was curated by Professor Stephanie James and Carol Maund, and produced by Mark Segal.