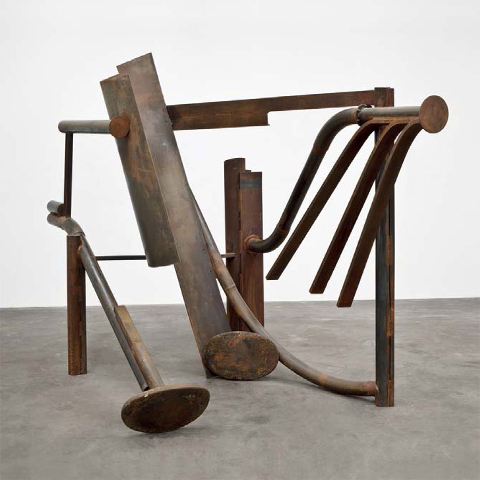 One of the most important things about sculpture is the way in which the viewer is invited to look at it. Whether s/he looks up, walks around it, whether it corkscrews like a Michelangelo or moves around like a Brâncu?i—the way in which it would be seen was governing how I approached the sculpture for Park Avenue.
—Anthony Caro

Anthony Caro’s Park Avenue sculpture series. This is his first exhibition with the gallery.

Steel pipes, beams, disks, and agricultural tools make up Caro’s latest abstract sculptures, which reveal fresh aspects from every viewpoint. The works evolved out of the planning process for an enormous public sculpture he envisioned for a busy thoroughfare in New York City, and as such are prompted by a sense of ground-parallel speed. The long, low pipes of Clouds, for example, create a latitudinal setting for smaller, curved parts that evoke lighter forms moving through space. Solitude is composed of curved and crumpled steel sheets that seem to float around an upright, cannon-like component. Art historian Michael Fried describes the Park Avenue sculptures as “conspicuously open,” an apt characterization given the exciting dynamism they achieve with few parts.

When Caro was invited to make a proposal for the Park Avenue public sculpture program, he considered the fact that most viewers would be traveling in cars, buses, or on foot. After at least two years of planning and multiple trips to New York, this ambitious project was canceled for financial reasons. Realizing that the structural sections he had designed to make up the larger work could become captivating forms in their own right, Caro used them as starting points for the present sculptures. In his introductory catalogue essay, Michael Fried writes about these sculptures: “My own impulse had been to think of late Beethoven, the great quartets…” They come across as both straightforward and intensely lyrical.

Caro’s initial breakthrough took place in the early 1960s with a series of large, brightly painted steel abstract sculptures, which he placed directly on the floor. At the time it was a radical presentation. This constant reinvention of the language of abstract sculpture, as well as his influential teaching career at St. Martin’s School of Art, have distinguished Caro not only as the sculptural successor to artists such as Henry Moore and David Smith, but also as an innovative artist who has consistently defied convention.