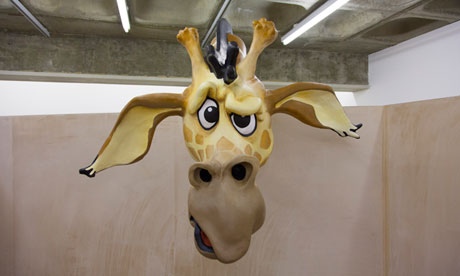 This article titled “Despite artworld hype Eddie Peake still has a way to climb” was written by Adrian Searle, for theguardian.com on Thursday 9th May 2013 16.51 UTC

What is it about Eddie Peake? Last year I watched a couple of his dance performances – called, obscurely, Amidst a Sea of Flailing High Heels and Cooking Utensils – at Tate Tanks and London’s Chisenhale Gallery. Unfortunately I didn’t attend his recent show at White Cube in Bermondsey, where roller-skaters performed on a reconstruction of Tecton architect Berthold Lubetkin’s now decommissioned 1933-4 penguin pool at London Zoo. I also missed his games of naked five-a-side football at the Royal Academy last year, where Peake, born in 1981, is completing his MA at the RA Schools this summer. He’d better watch out that he gets down to some proper work before the examiners come round. Nor did I make it for his recent shows in Rome or LA. I think he’s DJing in New York this week and obviously I’ll miss that too. Damn.

So to Southend-on-Sea for Peake’s latest exhibition at the Focal Point Gallery, housed on the top floor of the town’s public library. I was expecting semi-naked gold- and glitter-covered beautiful bodies. I expected live drum’n’keyboard beats, sampled riffs and twisted melodies, which Peake has used in some of his dance performances (and which remind me of the marching beats of Leibach, who choreographer Michael Clark used to work with). I hoped for simulated sex moves, bodies marching and locked in frozen poses, with an art historical and homoerotic twist. I hoped not for audience participation (never say never, and hang the critical objectivity) but for audience voyeurism, which Peake enjoys provoking. We are all always voyeurs, each of us our own pornographer.

Instead, I saw a giraffe. And a Staffordshire bull terrier. And almost some seagulls. And a couple of blokes hanging about on a video. Fully clothed. And there’s a wall. How they got the giraffe into the low-ceilinged gallery is a mystery. Inside the gallery is a space-within-a-space, a high smooth wall surrounded by a narrow corridor. This is meant to remind us of Lubetkin’s modernist zoo enclosures. I only know that because I read it in the handout. You can look in through a picture-frame window cut into the wall, and there’s an entrance. The giraffe is a life-sized model, with a stupid big-eyed flared-nostril gurning head that peers in over the wall, its neck bent to avoid the concrete ceiling. Unlike the zoo, we are on the inside and the giraffe’s watching us, in cartoonish consternation. Meanwhile, we watch two identical twins on a domestic-sized video screen, I suppose to keep us company in the otherwise bare space. The twins are Chuka and Dubem Okonkwo, known as the Islington twins. Peake has known them for years and I’ve seen them around too. Peake is also a twin and his brother, Lewis, designed the giraffe. This is all very cosy, even if we are turned into zoo creatures being looked at by an even-toed ungulate. Here, it’s the people who are exotic.

Not much happens in the video, which was filmed in the blank white gallery. The twins, with their striped scarves, caps and sensible shoes, have a kind of college elegance. I guess there’s a reference here to the fact that we’re in a library. They raise their arms, they put them down again. They look in one direction, then another. One leaves. I leave too. It’s not quite Gilbert and George, who aren’t twins anyway. Or that terrifying installation Gregor Schneider made using several sets of identical twins in Whitechapel a number of years ago, which scarred me for life. But this will have to do.

Staffordshire bull terriers are apparently the most popular dog in Southend. This much-maligned species is loyal and astute, and they’re even known as “nursery dogs” in Essex. I only saw one in town. It looked friendly enough, apart from the man in its mouth. Peake’s mutt is a mottled brown marble silhouette, leaning against a wall. Its cut-out eyes and mouth are in the forms of flying seagulls, but they’re a bit hard to make out. These, I understand, are Mediterranean gulls, driven by southern European poverty to live in the Thames Estuary. Set a Staffie on them, I say.

Obviously creative and inventive, Peake has a way to go. There are lots of references and thinking, but I want more than this. I guess so does Peake. More voyeurism, more bodies!