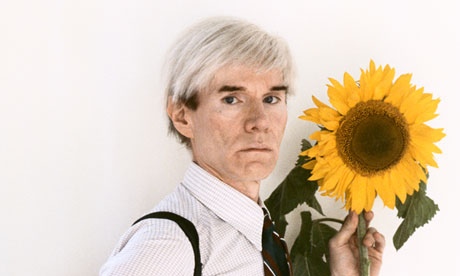 Andy Warhol, photographed by Steve Wood. ‘It is in his face that all posing vanishes and we see the true, delicate inner person.’ Photograph: Steve Wood

This article titled “Andy Warhol lost then found: tender portrait of artist in 1981” was written by Jonathan Jones, for theguardian.com on Wednesday 24th April 2013 18.10 UTC

Andy Warhol went out of his way to be misunderstood. He wore shocking wigs, posed behind dark glasses and made laconic statements that to this day get him caricatured as a vacant, heartless worshipper of money and fame. Yet in the French seaside resort of Deauville in 1981, British photographer Steve Wood saw the truth about Andy Warhol. He photographed a sensitive, shy man whose secret was that he had a soul.

Wood’s intimate pictures have been hidden away for more than 30 years. They were not published at the time and Wood simply filed them away under W. One day he found them again, and they are being shown for the first time in an exhibition in New York called Lost Then Found.

There is something very moving and tender about these images. Their sudden appearance is like meeting Warhol himself, away from the sleaze and glamour of his New York life, away from the need to pose.

Here is Andy Warhol with his mask off.

He conducts a kind of slow private dance with a sunflower, in the soft, lyrical light that is typical of Deauville, in cool Normandy. This was where the Impressionists came to paint. Warhol’s sunflower is a sweet homage to an art hero of that age – Vincent van Gogh.

In their public images Warhol and Van Gogh are direct opposites. Where Andy is supposed to be remote, Vincent is the painter of passion. But here is Warhol, pensive with a sunflower, meditating on Van Gogh.

It is in his face that all posing vanishes and we see the true, delicate inner person. His eyes in these pictures are like those of a young deer – no wonder he so often hid his vulnerability behind dark glasses. Here he is at the height of his fame, and supposedly the height of his cynicism in the Reaganite 80s, and he has the eyes of a gentle teenager. No wonder he got on so well with young artists like Keith Haring and Jean-Michel Basquiat in these last years of his life.

Warhol died during an operation in 1987. That death seems somehow to be gliding towards him in these pictures. They get us very close to the real living man – his pale skin, his thinness, his smart tie. It is impossible to resist seeing them through the lens of his own art. In his silkscreen paintings, Warhol took photographs and turned them into stark images of loss and death – as in his Tate masterpiece that shows the fading face of Marilyn Monroe. These pictures bring a dead man momentarily to life. It’s as if he, not just his image, has been lost then found.

Warhol is back from the shadows, and he is wearing his heart on his crisply ironed white sleeve.