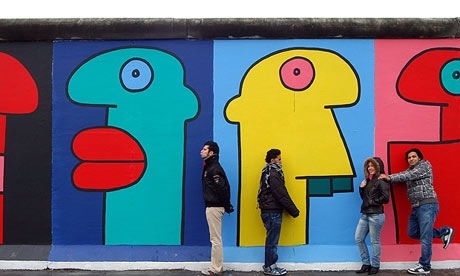 This article titled “Berlin Wall’s most iconic paintings under threat from property developers” was written by Kate Connolly in Berlin, for theguardian.com on Wednesday 27th February 2013 18.24 UTC

Spilling out of the Eastern Comfort hostel, which floats on Berlin’s river Spree, a gaggle of Spanish tourists in town for a week of clubbing poses for the customary snapshots at one of the city’s most iconic images. The painted mural of former Soviet and East German leaders Leonid Brezhnev and Eric Honecker in a passionate clinch is one of the star attractions of the East Side Gallery, the longest-remaining stretch of Berlin Wall and the second-most visited site in Berlin.

But the 1.3km-long outdoor gallery, which is covered in paintings by artists from around the world, is now threatened by the city’s strident advance of gentrification, with a significant section of it due to be dismantled soon to make way for a luxury block of flats.

“Our guide book describes it as an unbroken length of wall,” said Coco García López, a 21-year-old art student from Madrid. But the gallery, she notes, already has a gaping hole after a 50-metre section was removed some years ago to provide access to a boat landing stage and an open view on the river for the 02 World arena, which dominates the land adjacent to the gallery. “If Berlin’s not careful, it will lose all of this beautiful structure,” she said.

The latest threat is from Living Levels, a 63-metre-high tower of 36 flats and offices, which its developers, Living Bauhaus, describe as a “totally new dimension of life and living” offering “breathtaking panoramic views”.

But opponents of the plan said it would destroy the aesthetics of the gallery, which is visited by an estimated 800,000 visitors a year, as well as insulting the memory of those who were killed on the former death strip.

“In this very place people died, and the idea of building luxury flats here would be like erecting a petrol station in front of one of Berlin’s museums,” said Sascha Disselkamp, manager of the Sage nightclub, who represents several high-profile Berlin clubs, including Watergate, KaterHolzig, Tresor and Lido, which have taken a stand against the new development, saying it would “irreparably damage” the character of the area.

Kani Alavi, head of the artists’ initiative East Side Gallery, who led a €2.5m (£2m) restoration project of the wall four years ago, and was one of the original artists to paint on the wall, said the whole of the structure was now under threat. “We see this act as a direct act of destruction towards the artwork, to the extent that you might as well tear the whole thing down,” he said.

The parts of the wall that are to be removed so the flats’ owners will have direct access to the water bear the famous colourful “heads with big lips” paintings by the French artist Thierry Noir. This week the 54-year-old artist joined protesters at the wall to fight for the preservation of his work as a part of the gallery and the wall’s survival.

“All the paintings have become a symbol of freedom in Berlin and Europe,” he said. “Unlike elsewhere in the city, where the majority of the wall has been removed, this is a unique opportunity to preserve a large section of what was once a death strip. If you remove the sections, you’re destroying the authenticity of this place.”

The district’s mayor, the Green MP Franz Schulz, confirmed that parts of the wall would have to be removed: “The investor has a legal right to demand this, so we’ll have to do it.” But he insisted the removal of the wall sections would not only make space for the flats but would also enable the construction of a new walkway for cyclists and pedestrians, the so-called Brommy Bridge, which will be a reconstruction of a bridge that was destroyed in wartime bombing, as well as providing an emergency exit for visitors to the adjacent Spree park.

Pausing at another of the wall’s iconic images – of an East German car, the Trabant, appearing to tear through the wall – García López, the Spanish tourist who was not yet born when the Berlin Wall was brought down in November 1989, said: “It’s the best place for me to come and have any sort of an inkling of what it must have been like to live in a divided city. If this goes, then that opportunity goes too.”