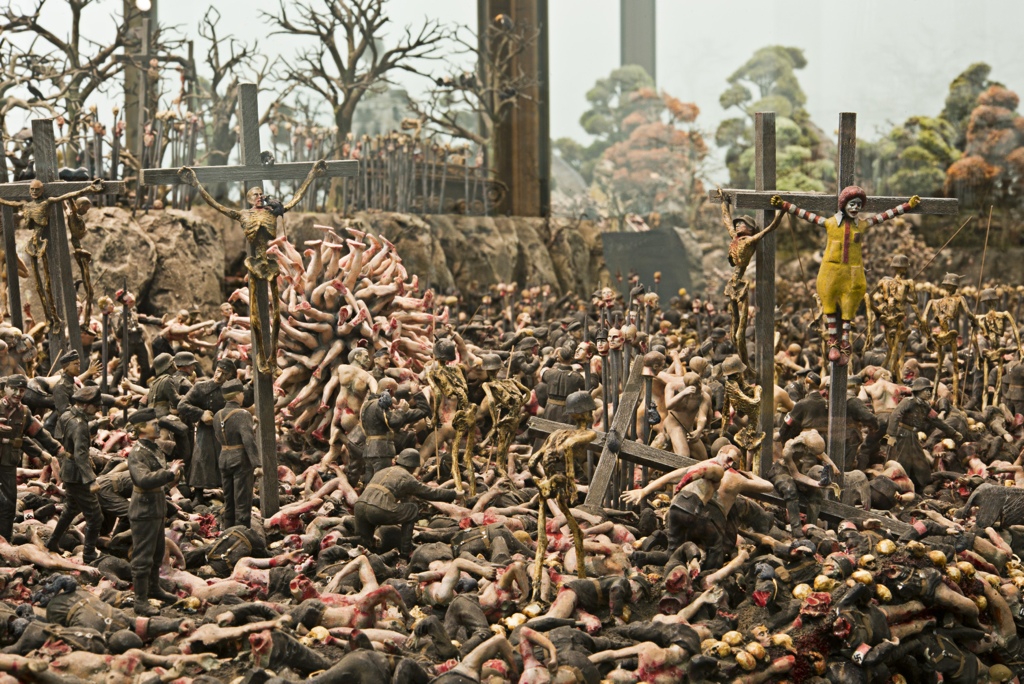 The Sum of ?ll Evil, 2012–2013. Fibreglass, plastic and mixed media. Courtesy of the Artists and White Cube

This is the first solo exhibition of Jake & Dinos Chapman in Ukraine titled “Chicken”. At the centre of the exhibition stands the major new installation entitled, The Sum of all Evil (2013) that forms a synthesized reflection upon the central themes such as the Holocaust, violence, and death. Alongside this, the exhibition will include a number of iconic works by the Chapman brothers whose sharp subversive humour and unbridled aggression provokes controversy and questions moral contemporary taboos.

“The Sum of all Evil” produced by the PinchukArtCentre, is a monumental miniature landscape which is composed of four encased dioramas sited on historical events including the discovery in Babi Yar (1941) of the Ukrainian mass grave where the Nazi occupier executed more than 30,000 Jews in just two days. In addition to this, ‘The Sum of All Evil’ references Art historical paintings including The Apocalypse by Hieronymus Bosch (1450–1516) and several etchings by Francisco de Goya (1746–1828). It is a sequel to Chapmans’ earlier epic nine-part installations, Hell (1999-2000) and Fucking Hell (2008) – their magnum opuses. Composed of a miniature landscape of concentration camps and mass graves in which thousands of hand-painted Nazi and skeletal soldiers commit murder, torture, rape, abuse and mutilation resulting in a fascinating catalogue of human horror. Ironically enough, the apocalyptic work ‘Hell’ (1999-2000) was destroyed in a fire in 2004 however, the Chapmans responded with the even larger and more ambitious Fucking Hell (2008).

“Jake and Dinos Chapman’s work continually verges on the breaking of taboos. It can be extremely offensive in its use of black humour and subversive jokes, addressing issues of violence, war, the Holocaust, genetic manipulation and death in all their inhumanity. It seems they are always ultimately concerned with generating a moral panic. The selection of work in this case fulfils such claims in a very specific manner, in that they will be premiering a new work, Sum of All Evil, which references the Babi Yar massacres in Kiev.” 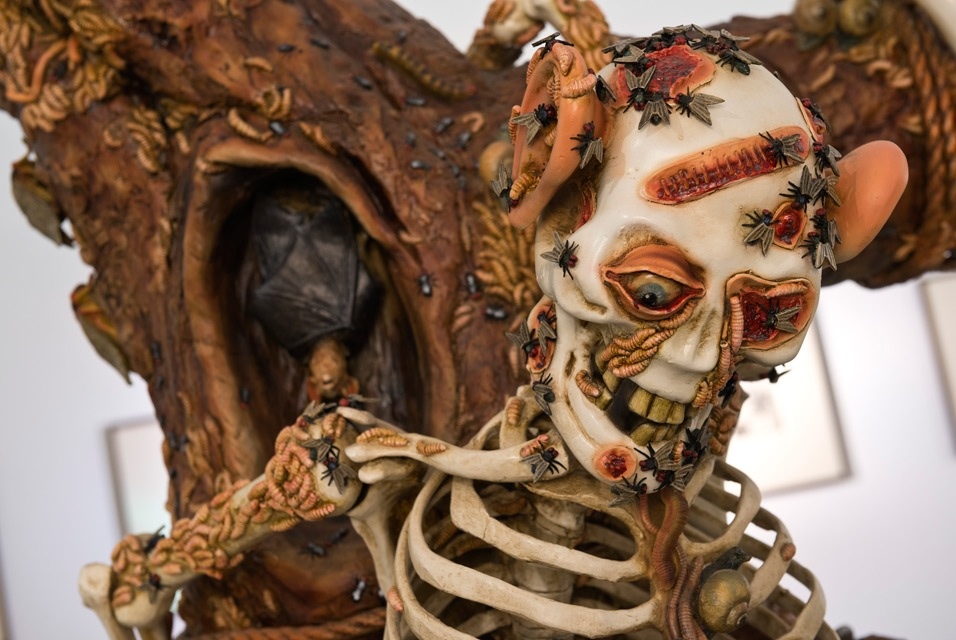 Sex I, 2003. Painted bronze. Courtesy of the Artists and Olbricht Collection

Among the other key works of the exhibition is the painted bronze sculpture, Sex I (2003) which alludes more directly to the ‘Great Deeds Against the Dead’, an original Goya etching from the Disasters of War series. In 1994, the Chapmans had made an eponymous life-size fibreglass reconstruction of this etching. Sex I presents the same scene a number of weeks later: the bodies of the martyrs are in an advanced state of decomposition and covered with hand-painted bronze casts of toy flies and worms. The hardness and naturalism of this scene is ruptured, in typical Chapman fashion, by the clown’s nose, devil horns and ears that the severed head has been given. Although the sculpture depicts death and decay, it carries the title Sex, a reference to the interrelationship between Eros and Thanatos (Love and Death).

The Chapman’s fascination with the work of the Spanish artist is a persistent theme throughout the brothers’ oeuvre. ‘From the Blackened Beyond’ (2011) is one entire set of Goya ‘Disaster of War’ etchings that the Chapman’s in their own words have ‘reworked and improved’.

Also on show are bronze sculptures from The Chapman Family Collection, based on rare ethnographic masks and fetish objects. Here, the Chapmans de-sanctify traditional tribal images by merging their authentic character with the mass-branding and symbols of the global fast food chain, McDonald’s. The telephone numbers of regional McDonald’s restaurants have become the catalogue numbers itemising each of the works in the Collection. McDonald’s can be seen as a symbol of globalization, commercialization and the cultivation of fast food. In terms of this presentation, the Chapman Family Collection parodies typical Western ethnographic museums and deepens the criticism of the underlying hypocrisy associated with a century of globalization.
Finally, the work Shitrospective offers an overview of the Chapman’s sculptural work until 2009. Cardboard models are offered not as truthful renditions but recreations that provide a primitive, childlike and brutal impression of the originals. By playfully changing the scale, the rough-cut models of their iconic masterpieces retain all of the horror, but intensify the humorous and playful aspects of the works.

The exhibition will be open in the PinchukArtCentre (Kyiv, Ukraine) from February 16 till April 21, 2013. Admission is Free. 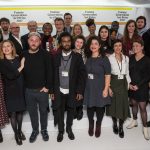 Applications now open for the 5th edition of the Future Generation Art Prize, $100,000 for the winner

PinchukArtCentre (Kyiv, Ukraine) announces the 5th edition of the Future Generation Art Prize. Established by the Victor Pinchuk Foundation in 2009, it is the 10th anniversary of the founding of the Prize.

Artists have one month left to enter the 3rd edition of the Future Generation Art Prize, launched and organised by the Victor Pinchuk Foundation and the PinchukArtCentre.