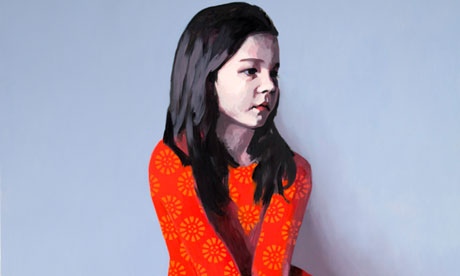 Detail from Girl in a Red Dress 2012, by Claerwen James.

This article titled “Claerwen James: The art of being Clive James’s daughter” was written by Vanessa Thorpe, arts and media correspondent, for The Observer on Sunday 10th February 2013 00.05 UTC

Clive James has predicted that he will one day be known not as a television critic and author but simply as “Claerwen James’s father”. On the eve of his elder daughter’s new solo show of paintings, however, she points out wryly that the day has not arrived quite yet. “The subject of my father does still come up from time to time,” she said.

“My strategy has been not to tell people, so for a long time nobody had the faintest idea.” James was spotted by London’s Flowers gallery soon after leaving art school, and her striking portraits, many of young women and girls, have been attracting growing attention.

Sad and powerful, the faces James paints are “not cheerful”, she concedes. “I am basically a cheerful person, but it is true my paintings do tend to have this quality of discomfort. It is just how I see the people I choose to paint.”

It is a technique that has won her fans and collectors, among them the novelist Ian McEwan, who bought a portrait in 2006 for what the gallery in Cork Street described as a “healthy four-figure sum”. She has also painted Cate Blanchett and her two children at the request of the actress. Her solo show at the Flowers gallery starts on Wednesday and, she said, will represent “a unified body of work I really wanted to show, although I am actually doing something rather different now and working on canvas”.

Her style, she said, is governed by “gut instinct”. “I try quite hard not to put my finger on it. I navigate by an internal compass if I can.” The concentration on youth springs from her sense that being a child is not enjoyable. “I am a long way away from my childhood now, but a lot of children are not that happy and I didn’t like being a child much either. It is an uncomfortable state, not knowing who you are yet, and not being able to articulate things or have any power.”

“There’s a great loneliness in some of her paintings,” her father, formerly the Observer’s TV critic, has said. “I hope I’m not responsible for that.”

Before studying at the Slade School of Fine Art in London, James, 42, she read zoology at Oxford and did postgraduate research in molecular biology with the Imperial Cancer Research Fund. A visiting lecturer in the US, she also took a PhD studying cell death.

“I did draw a lot as a child, though. I was encouraged and given a lot of time to do it,” she said. “But then I was a scientist for a long time because I didn’t think I had anything to offer in art. I painted right through my time at university until I realised that all I thought about was the few weeks in the summer that I could spend painting. When I finally started doing it full-time I thought, ‘Yes. This is who I am. How strange that I was that person before’.”

Her father and Prue Shaw, his wife of 40 years, have two daughters, whom they brought up in the family home in Cambridge. He described his eldest child as a “good mediator” in his marriage. “My wife and I both have demanding, quite independent lives and it’s easy to walk right past each other. Claerwen reminds us that we shouldn’t,” he said.

The family meet regularly at weekends and she lives nearby in Cambridge with her husband, Jonathan Grove, a scholar of medieval Icelandic literature, and their young daughter.

“One good thing about time passing is that the ‘celebrity hat’ my father wore while he was on television, and which was actually quite extreme and not something that you would choose, well, now it’s fading. More people remember that he is a poet and a writer and that is the aspect of his work that I love. So the public idea of him is coming closer to my own idea.”

The advent of the internet helped to reveal her identity as his daughter to the art world. “Suddenly everyone seemed to know, and fame has a really odd effect on people. They don’t always know how to handle it. They go to one extreme and either say, ‘I have always thought he was wonderful’, which is nice to hear, but a bit strange, or else they say something quite rude about him.”

A year after her first degree, James spent a year in Australia trying to find roots in her father’s homeland. “Once I was there I felt completely English, though. I am not sure now whether it is a privilege or a disadvantage, but I tend not to feel 100% as if I belong in either place,” she said.

Her portraits are painted from photographs rather than live sittings and the artist explains that she sees the nostalgia and loss implied by photography as the key point of her work.

“My subject matter hasn’t changed. I don’t really paint portraits to commission and so I approach people I see sometimes, which can be a difficult conversation. One subject was a woman I used to see at an organic vegetable stall and was desperate to paint. Luckily she was happy to do it. I have to explain to people that I am going to take thousands of photos of them.”