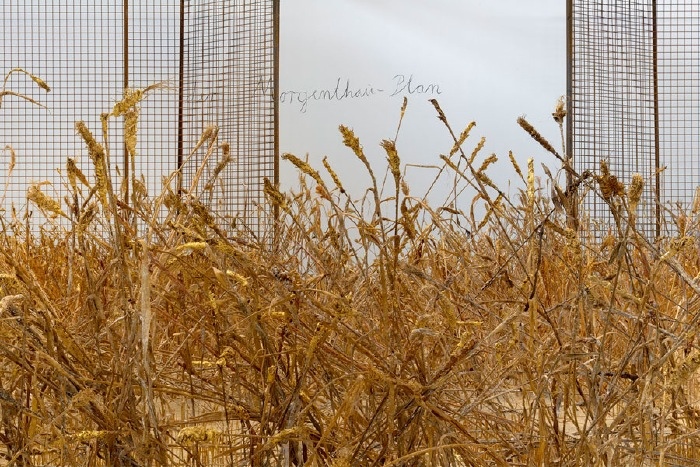 Following major exhibitions at Gagosian Gallery in New York (1998, 2000, 2002, 2010), Los Angeles (2008), and Rome (2009), this is Kiefer’s first exhibition with the gallery in Paris. Kiefer’s monumental archive of human memory gives overt material presence to a broad range of cultural myths and metaphors—from the Old and New Testaments, the Kabbalah, and ancient Roman history to the poetry of Ingeborg Bachmann and Paul Celan. Fusing art and literature, painting and sculpture, Kiefer engages the complex events of history and the ancestral epics of life, death, and the cosmos. He integrates, expands, and regenerates imagery and techniques, emphasizing the importance of the sacred and the spiritual.

In “Morgenthau Plan,” the gallery is filled with a sculpture of a golden wheat field, enclosed within a five-meter high steel cage. Kiefer’s wheat field refers to the plan proposed in 1944 by former United States Secretary of the Treasury Henry Morgenthau to transform Germany after World War II into a pre-industrial, agricultural state thereby limiting its ability to wage war. Morgenthau sought to divide Germany into two independent states; annexing or dismantling all German centers of industry in a devastating arrangement that would have led to the death of millions of citizens by pestilence and starvation. Although the Morgenthau Plan was never realized, it represented a potential alternative German history.