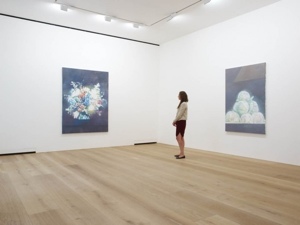 5th October – 17th November 2012
?
David Zwirner first exhibition at its new London gallery will be by Luc Tuymans.
Entitled Allo!, this will be the artist’s first solo presentation in London since his 2004 retrospective at Tate Modern. This new eponymous body of work is inspired by one of the final scenes in the 1942 film The Moon and Sixpence, an adaptation of W. Somerset Maugham’s novel from 1919.

The film’s plot is loosely based upon the life of Paul Gauguin and revolves around the character of Charles Strickland, a former stockbroker who leaves his job and family to become an artist. Several years later, following Strickland’s death, his doctor travels to his living quarters in Tahiti and is taken aback by the powerful, beautiful art left behind. Tuymans’ painting depicts the moment the doctor enters the impassioned
artist’s thatched-roof studio and experiences the work in person. Shortly thereafter, the studio and its contents are set on fire by Strickland’s new wife as part of a promise to her husband on his deathbed.

In original screenings of the film, these final scenes were rendered in colour, in contrast to the black-and-white appearance of the earlier parts of the film.

??About Luc Tuymans
Born in Morstel, near Antwerp, Belgium, in 1958, Luc Tuymans studied fine art in Brussels and Antwerp before completing a degree in Art History at the Vrije Universiteit in 1986.
Tuymans is widely seen as having contributed to the revival of painting in the 1990s. His sparsely-coloured, figurative works speak in a quiet, restrained, and at times unsettling voice, and are typically painted from pre-existing imagery which includes photographs and video stills. His canvases, in turn, become third-degree abstractions from reality and often appear slightly out-of-focus, as if covered by a thin veil or painted from a failing memory. There is almost always a darker undercurrent to what at first appear to be innocuous subjects: Tuymans has, in this way, explored diverse and sensitive topics including the Holocaust, the effects of images from 9/11, the ambiguous utopia of the Disney Corporation, the colonial history of his native Belgium, and the phenomenon of the corporation.

Tuymans was the subject of a major retrospective, co-organized by the Wexner Center for the Arts, Columbus, Ohio, and the San Francisco Museum of Modern Art. It travelled from 2010 to 2011 to the Dallas Museum of Art; Museum of Contemporary Art Chicago; and the Palais des Beaux-Arts, Brussels. Previous major solo exhibitions include those organized by the Moderna Museet Malmö, Sweden, in 2009, and the Tate Modern, London, in 2004. Other recent solo exhibitions include Museum of Contemporary Art, Zagreb, Croatia (2012); the Centro de Arte Contemporáneo de Málaga, Spain (2011); Haus der Kunst, Munich; Zach?ta National Gallery of Art, Warsaw (both 2008); M?csarnok Kunsthalle, Budapest (2007); Museu Serralves, Porto, Portugal; and the Musée d’art moderne et contemporain, Geneva (both 2006). The artist represented Belgium at the 49th Venice Biennale (2001).

In 2009, Tuymans was the curator of The State of Things: Brussels/Beijing at the Palais des Beaux-Arts, Brussels, which travelled to the National Art Museum of China, Beijing, and A Vision of Central Europe at the Brugge Centraal, Bruges, Belgium, in 2010.

A catalogue raisonné of the artist’s paintings is currently being prepared by David Zwirner in collaboration with Studio Luc Tuymans. Compiled and edited by art historian Eva Meyer- Hermann, the catalogue raisonné will illustrate and document approximately 500 paintings by the artist from 1975 to the present day.