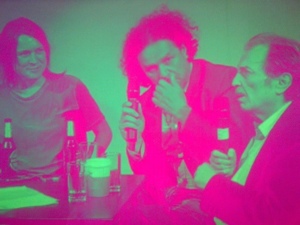 Introducing the film, Gregor Muir, Executive Director ICA, Julian Simmons (who filmed the event) and Sarah Lucas will discuss in more detail what was said between the three artists–Lucas, Raabe and West–in the face of frequent sonic disruptions by Quehenberger, an electronic musician based in Vienna. The screening not only reflects on last year’s ICA presentation of West’s outdoor sculptures, but Lucas’ special connection with the artist who became a friend soon after his 2003 Whitechapel exhibition.