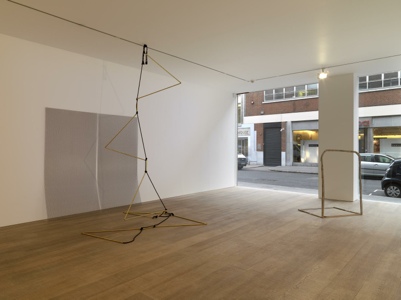 Stuart Shave/Modern Art is to show a solo exhibition of new sculptures by Sara Barker. This is the British artist’s first solo show in London, and her first with Modern Art.

Sara Barker’s sculptures are formed from sparse linear structures, comprising and being comprised of varied, crooked rectilinear shapes. The narrow frames of her work are repeated, fragmented and fitted together to read as if drawings in three dimensions: outlining space and creating a sense of volume and solidity for each work with what seem to be frail and humble propositions. Whilst ostensibly formal and certainly reticent, Barker’s work takes influence too from notions of the sentimental and romantic. Barker often makes use of quiet literary references to allude to something otherwise unspoken in the work: this show, for example, takes its title from that of Caspar David Friedrich’s painting of a female figure standing before a window, gazing out of a room through its frame, looking upon an architectural scene-within-a-scene.

In this exhibition at Modern Art, Barker presents a vocabulary of sculptures that restate positions of particular and specific relationships to the support of the wall and the floor. The flatter faces of her sculptures are often coloured with swirls of gouache, watercolour and oils applied to the surfaces – thin painterly moments within a continuous line variously formed with fragments of folded aluminium, steel, brass, wood, fragments of canvas and patches of filling compound. Here and there the narrow silhouettes of her bare materials and painted surfaces are mimicked in the play of light on the edges of glass panes and complicated by the dynamic character of thin and seemingly active lines overlapping in architectural space. Barker’s process is that of thinking through making, and leaving that process evident in a trail of ad-hoc engineering and delicate yet rudimentary construction that lends austerity an affectionate and romantic character.

Sara Barker was born in Manchester in 1980, and lives and works in Glasgow. Barker attended the British School at Rome 2008-2009, and completed BA (Hons) in painting at Glasgow School of Art 1999-2003, where she also studied history of art 1998-1999. Barker’s work has been included in the recent exhibitions Frauenzimmer, Museum Morsbroich, Leverkusen, Germany (2011); The morning after the big fire, Ville du Parc Contemporary Art Centre, Annemasse, France (2009); Open Eye Club, Tramway, Glasgow (2008); and will be included later this year in Drawing: Sculpture, The Drawing Room, London & Leeds Art Gallery, Leeds.