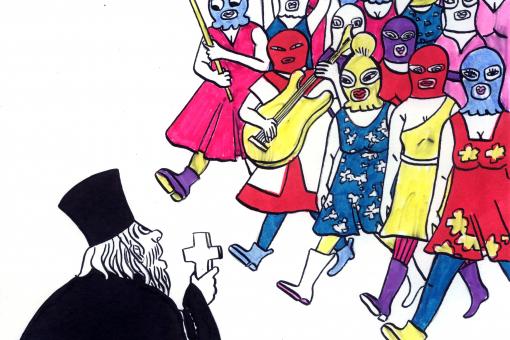 This article titled “Russians join in call for Pussy Riot trio’s release” was written by Miriam Elder, Moscow, for The Observer on Saturday 30th June 2012 11.21 UTC

Artists and musicians around the world have called for their release. Now, nearly four months after three women were arrested for performing a protest anthem inside Moscow’s most important Orthodox church, Christ the Saviour cathedral, a growing number of Russians are joining calls for their freedom.

Nadezhda Tolokonnikova, Ekaterina Samutsevich and Maria Alehina – all members of the anarchic Pussy Riot punk band – have been in prison since March, held on charges of hooliganism which could eventually mean a seven-year sentence. Many Muscovites were happy enough to see a tough response to the band’s irreverent act of rebellion, which was aimed at President Vladimir Putin. But with no trial date set, no signs that they will be released and opposition to Putin spreading, support for the trio has grown, even among those who at first condemned them.

“Their actions insulted me, because I’m religious,” said Alexander Ivanov, a popular musician. “It’s not what they said, it’s where they did it. I was offended – but for them to get seven years in jail for an unsuccessful experiment, that’s going too far.”

Ivanov is one of more than 100 cultural figures who signed an open letter last week calling on the state to release the women, in an indication that popular unease at their plight is growing.

“It scares me that, for a rather unsuccessful, but extreme, cultural experiment, they want to jail them for so many years,” he said. “Artists need to have freedom.”

Some of Russia’s best-known opposition figures – satirist Viktor Shenderovich, poet Lev Rubinstein, musician Yury Shevchuk – signed the letter. Other names were more surprising, such as those of actress Chulpan Khamatova and actor Yevgeny Mironov, both of whom appeared in videos for Putin’s re-election campaign earlier this year. Director Fyodor Bondarchuk, a prominent supporter of Putin’s, also added his name. The signatories warned of the social divisions caused by the case, stating: “While the participants in the performance have been held under arrest, an atmosphere of impatience has grown in society which will cause division and radicalism. We do not see any legal foundation or practical sense in further isolating from society these young women who present no real danger.”

Nearly 25,000 other supporters have added their names to the letter, which was published on the website of the liberal radio station Ekho Moskvy.

The domestic groundswell of opinion comes after a concerted international campaign. Beastie Boy Ad-Rock – real name Adam Horowitz – has performed at a Pussy Riot benefit in New York; the US punk band Anti-Flag have released an English-language cover of the controversial Punk Prayer, and the Tokyo Palace in Paris has opened an exhibit on the jailed rockers.

Benefits have been held in Prague, Warsaw and Tallinn, where the Estonian president was in attendance. But such backing from Russia’s cultural intelligentsia was until recently all but non-existent. Artemy Troitsky, Russia’s premier rock critic, thinks similar acts in Russia would be impossible. “We could put on a concert in support of Pussy Riot in a forest or something,” he said. “But in our police state it’s not realistic to put on such a concert – it would be stopped.”

Troitsky, a harsh regime critic with a sharp, expletive-laden tongue, has instead gathered hundreds of artists to put together a series of albums to support the growing movement against Putin’s rule – and to call for Pussy Riot’s release. The so-called “White Album” has more than 350 artists so far; a proper album is in the works. Troitsky is hoping for songs, or messages of support, from stars such as Paul McCartney or Madonna, who will perform in St Petersburg in August.

“We’re calling for honest elections, a fight against corruption, justice and freedom for political prisoners – Pussy Riot first,” Troitsky said. “They are the clearest and most undoubtable case of people arrested for political reasons.”

Last week Amnesty International again called for the release iof the three women, whom they have dubbed prisoners of conscience. The statement came after a Moscow court extended the trio’s detention until 24 July. No trial start date has been set.

“The case is dragging on because they can’t do anything – on the one hand, they can’t let them go because it would be against Putin’s order; on the other hand, they can’t start the trial because they have no argument,” Troitsky said. Putin criticised Pussy Riot’s performance shortly after their arrest, which many in Russia took as a signal of his support for the criminal case against them.

The longer it drags on, the more public acts of defiance grow. Last week, actor and director Olga Darfi strutted down the red carpet at the opening of Moscow’s International Film Festival in a makeshift pink balaclava.

“I don’t share their point of view and I’m not aesthetically close to what they do, and maybe they deserve some administrative punishment,” Darfi said. “But that they’re in jail is totally illegal. And we have to fight against this situation and create social pressure – if we do nothing then any of us can find ourselves in this situation. It’s very dangerous.”Pussy Riot shot to notoriety inside Russia with their flash performances of anti-Putin punk songs, accompanied by a revolutionary look of bright balaclavas and stockings. A February performance inside Moscow’s Cathedral of Christ the Saviour, dubbed Punk Prayer, led to their arrest. The anti-government lyrics, delivered in the heart of official Orthodox Christianity, shocked the nation.

The powerful Orthodox church has continually attacked the band. Last week its spokesman, Vsevolod Chaplin, said that God had told him in a divine revelation that he “condemns what they have done”. He added: “This sin will be punished in this life and the next.”The signatories of the open letter in support of Pussy Riot warned of the social divisions caused by the case. “While the participants in the performance have been held under arrest, an atmosphere of impatience has grown in society which will cause division and radicalism.

“We do not see any legal foundation or practical sense in further isolating from society these young women who present no real danger,” the letter said. Nearly 25,000 readers have added their names to the letter, which was published on the website of liberal radio station Echo Moskvy.